Many music festivals were forced to hibernate their way through 2021. That can’t be extended to Wollongong’s Yours & Owls, who faced an uphill battle to go ahead in NSW. From rotating stages to social distancing, there was a lot they had to take into consideration – but the end result was worth it.

They delivered an extraordinary festival, and now, in 2022, they’re about to do it again. That’s right, over April 2 & 3, 2022, Stuart Park Wollongong will be alive with some of the best live music acts in Australia.

Speaking of hip-hop giants, Yours & Owls will feature Bliss n Eso, who’ll be bringing tracks from their 7th studio album The Sun to the Gong shores. Their reputation for consistently epic live shows and smash hit singles has built them one of the most loyal fanbases in the country.

We’ve all heard “Crave You”, the first release of the adored electronic music superstars Flight Facilities. In 2021, they released “Lights Up”, with promises of more to come. Let’s hope we hear a teaser at the festival!

That’s just a taste of the impressive line-up they’ve got in mind. To name a few more, they’ll have The Jungle Giants, Peking Duk, Violent Soho, (The Return Of) Faker, Harvey Sutherland; Jack Rive,  Lastlings and Late Nite Tuff Guy gracing Wollongong with their presence. Take a look at the rest of their exciting line-up HERE. 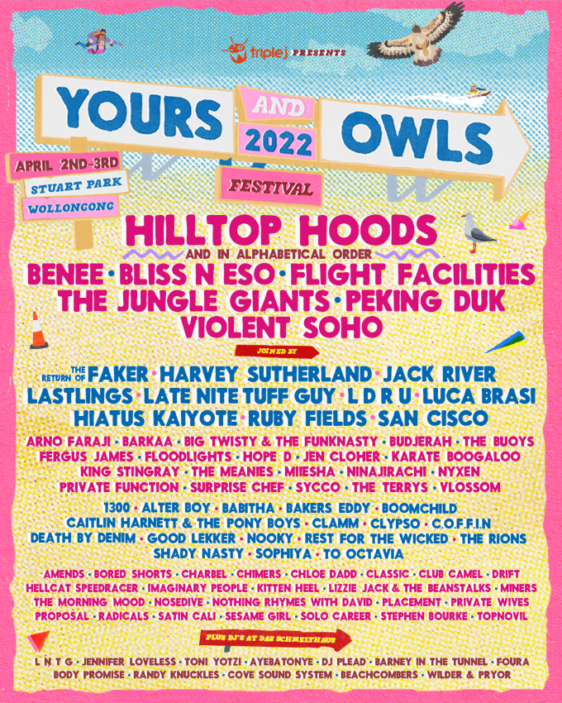 What about the venue? In 2022, Yours & Owls will return to its spiritual home, the well-loved Stuart Park, in Wollongong. This site has plenty of space for all the dancing you could dream of!

Safety’s been considered too. Yours & Owls will be in touch with the NSW government every step of the way to make sure the event will not only be incredibly fun, but also incredibly safe.

Excited to party and interested in winning some cool prizes? If so, check out their pre-sale, going on sale at 9am AEDT on Nov 16th by registering HERE

The top point scorer will win a Fender Guitar Signed by Y&O Artists, plus 4 VIP tickets for you and your mates plus a $200 Festival Credit. Super cool! The next top 30 scorers will also win – they’ll score weekender tickets!

Pre-sale too soon for you? General tickets will be going on sale at 9am AEDT on Nov 18th HERE