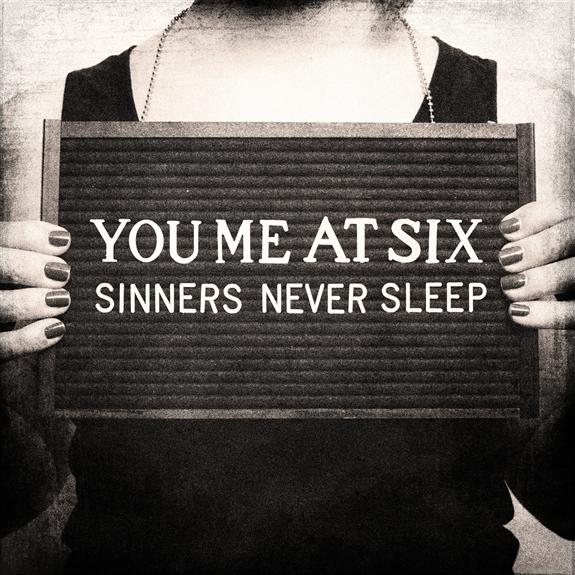 Produced by Garth Richardson (Biffy Clyro, Rage Against The Machine, Red Hot Chili Peppers) and recorded at the famous Sound Factory studio in Los Angeles, ‘SINNERS NEVER SLEEP’ sees YOU ME AT SIX exploring their most mature sound to date extending the band’s scope wider than ever before. Bring Me The Horizon’s Oli Sykes guests on the dark anthem ‘Bite My Tongue’, while Parkway Drive vocalist Winston McCall contributes to the growling intensity of ‘Time Is Money’. The hook-infused melodies of ‘Jaws On The Floor’ and ‘Reckless’ are offset by the more introspective ‘No one Does It Better’, ‘Crash’ and ‘When We Were Younger’.

Having recently played sets in the UK at the Sonisphere and T in the Park festivals, YOU ME AT SIX will play the V Festival at Staffordshire (August 20th) and Chelmsford (August 21st) before returning to Australia for a co-headline tour with We The Kings that coincides with the album’s release.

Since the release of ‘Hold Me Down’, YOU ME AT SIX have enjoyed a rush of landmark events. First was the 2010 Kerrang! Awards where they won ‘Best Single’, which was soon followed by their main stage debut at the Reading and Leeds festivals. That year, the band played two nationwide tours; which reached a combined audience of 65,000 people. YOU ME AT SIX were also recently named as Future Flames Ambassadors by Coca-Cola, a Presenting Partner of the London 2012 Olympic Torch Relay, and will be helping to find inspiring young people to carry the Olympic Flame next year.

YOU ME AT SIX | ‘SINNERS NEVER SLEEP’ | RELEASED SEPTEMBER 30