When Willie Nelson throws a party at his ranch, it’s not a festival. It’s a reunion. 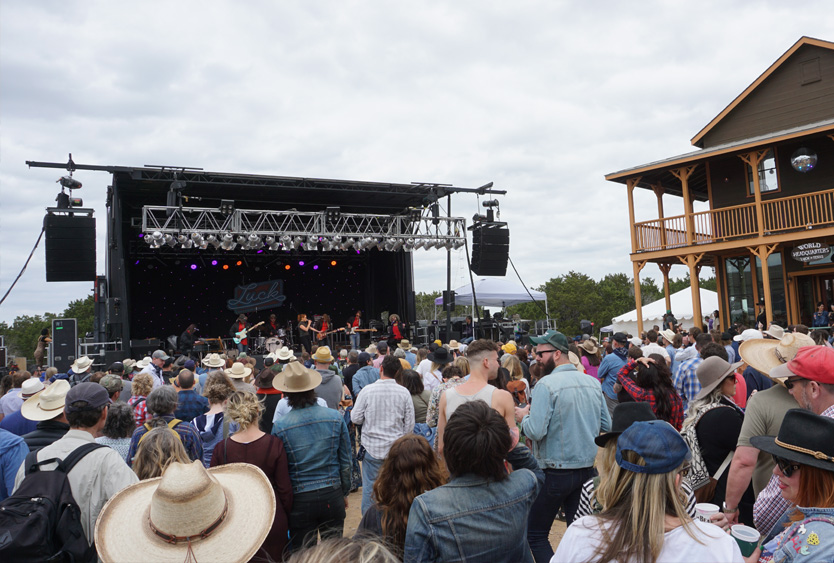 The annual event Luck Reunion returned to Willy Nelson’s Ranch in Luck, Texas earlier this month, delivering an afternoon of incredible performances, food and drink in what was the event’s sixth year. But describing exactly what Luck Reunion is to someone who hasn’t been is hard. And just to be someone who’s been is hard – these are some of the most exclusive tickets on the planet. And after reading this article, hopefully you’ll understand why – and why this is an experience you need to have once in your life.

The drive to Willie’s takes about 45 minutes from the heart of Austin, eventually taking you down a long dirt road, past some horses and into the Wild West paradise that Willie has made his own. A Hollywood-esque sign on a nearby hill pronounces that you are indeed in “LUCK” – if the music emanating around you wasn’t a sign enough. 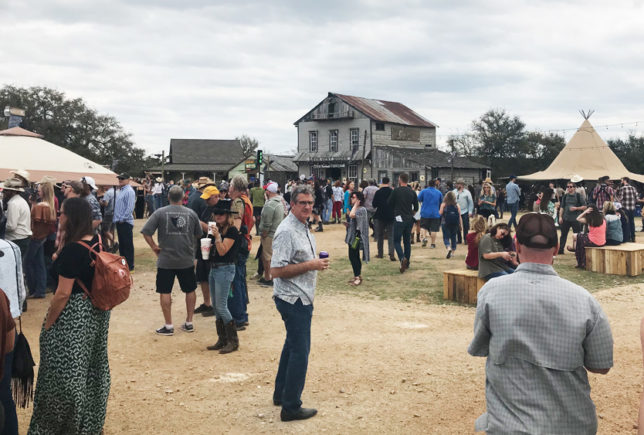 If you were to think that it looks like the set of Westworld, you wouldn’t be far off; the ranch, and the buildings that inhabit the entertainment area (where Willie’s Weed Dispensary was sadly closed for business), were once the set for the 1986 film Red Headed Stranger. And the attention to detail is extraordinary; added neon lights and other immaculately presented old buildings, with neon signs adding a modern twist; wooden logos and paintings of Willie found elsewhere.

The first act I caught were Night Moves, a quartet out of Minneapolis who effortlessly mix together alt-country and pysch rock, with vocals reminiscent of Alberta Cross’ Petter Ericson Stakee. Not a bad place to start.

Over on the main stage, Nicole Atkins and Australia’s own Ruby Boots were amongst the guests during The Texas Gentlemen‘s “Gents and dames” set. Ruby performed her own song “Don’t Talk About It”, and joined for backing vocals with Nicole Atkins on “Stand By Your Man”. A stand out set that showed the Dallas quintet off to one of the finest live acts in town.

Paul Cauthen, who oft performs with The Texas Gentlemen, could be found on Luck’s smallest outdoor stage. Pauthen and his four piece band lit up the event with a truly mind blowing set, filled with incredible energy and breathtaking jams. Margot Price popped up with him throughout the set, as they churned out memorable songs like “My Cadillac”. An artist who should be booked on every festival stage, everywhere in the world.

Micah Nelson aka Particle Kid got the crowd singing along, and Preservation Hall Jazz Band Brought the New Orleans vibes, getting everyone moving with a high energy, brass filled set. And Kurt Vile played tracks like “Runner Ups” solo in front of a hypnotised crowd – which is to be expected on Willie Nelson’s ranch after the sun went down, even if he’d closed his dispensary for the day.

Waxahatchee also played beautifully and solo, with some tracks just her on guitar and vocals, such as “Recite Remorse”, and others also seeing her hit the keys.

Elsewhere, Hiss Golden Messenger performed beautiful music with Megafaun’s Phil Cook, playing originals and covers like Blind Willie Johnson’s “The Rain Don’t Fall on Me”. And for me Phil really captured the essence of the event, that is, after all, in the name: “It’s not a festival. It’s a reunion. That’s a cool way to put it.” And by spending any time backstage, front of stage, in the crowd or with any of the artists, it definitely felt like that. The people who come here, come here every year. It genuinely feels like everyone knows each other – both on stage and off – and the experience you have as someone new to that “reunion” is a magnificent one. And they really go out of their way to make you feel like family.

As is tradition, the night would close with Willie Nelson & Family performing a special set, but before then, the beautiful vocals of Josh Ritter (playing songs like “The Temptation Of Adam”) and the surprise appearance of Nikki Lane helped close out two of the other stages, while Nathaniel Rateliff and the Night Sweats opened things up for Willie on the main stage. Playing songs like “A Little Honey” off their latest album, and “I Need Never Get Old”, which already seems like a classic, Rateliff had the crowd singing and dancing along, as they brought out the Preservation Hall Jazz Band and Daniel Creamer with The Texas Gentlemen to close out the night with a big singalong for “S.O.B.”

And then it was time for the honorary Mayor of Austin – and probably all of Texas – Willie Nelson to hit the stage with his family band (including Lukas and Micah who had both played their own sets earlier). Opening with “Whiskey River” and a family embrace (it’s possible they only saw each other after jumping on stage), Willie – who at a remarkable 84 years still has the voice but doesn’t quite have the guitar skills he used to – churned through a number of his hits and favourite covers, leaving into the stage being flooded by the likes of Nataniel Rateliff, Margot Price and the Preservation Hall Jazz Band for a closing medley featuring “I Saw The Light” and “I’ll Fly Away”. 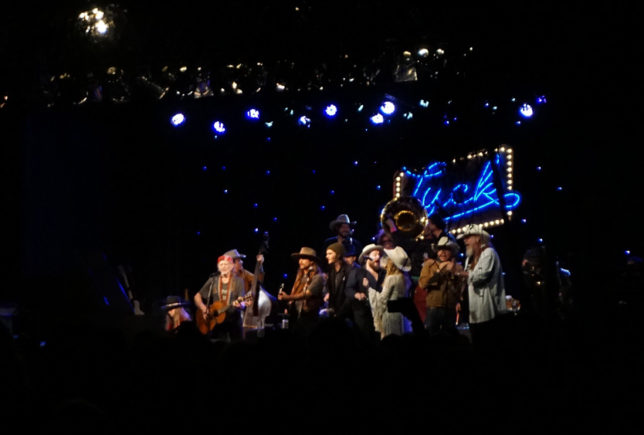 Elsewhere in the set, songs like “Beer for my Horses”, “Good Hearted Woman”, “Texas Flood” (with Lukas on Vocals), “Mama’s Don’t Let Your Babies Grow Up to Be Cowboys”, “Roll Me Up and Smoke Me When I Die”,  Hank William’s “Hey, Good Lookin'”, “Last Man Standing” and “Will The Circle Be Unbroken”. Not bad for an 84 year old country legend, hey?

There was more than just great music to experience at the festival; the food and drink was also beautifully curated. With free drinks for all guests (!!!) – and food trucks delivering a wide variety of options, there was a little something for everyone. The beautifully preserved Western Era buildings became places to experience unique cocktails (from Hendricks and Tito’s to El Silencio Mescal) and bespoke experiences – like getting a custom leather bag tag courtesy of key sponsors Southwest. Amongst the food trucks and restaurant quality stalls, meanwhile, you’d find brisket fried rice, hot fried chicken burgers with Mac and Cheese (pictured below), Indian tacos (with Roti instead of a tortilla and a Chicken Tikka Masala filling), and even mouth watering lobster rolls. 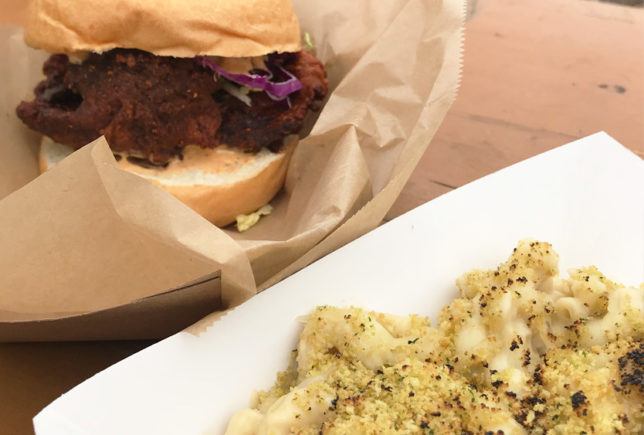 Almost an hour out of Austin, heading out to Luck Reunion has always been a difficult commitment – it costs you a day at SXSW. But my only regret is not doing it sooner. Getting to see Willie Nelson perform on his own ranch, surrounded by his family and friends – both on stage and off – is the sort of bucket list experience everyone should be lucky enough to enjoy in their lifetime. There was a magic in the air as the two thousand guests – all with immovable grins – enjoyed great food, an open bar and some of the finest music that you’ll find anywhere in the world – let alone in Texas.

Luck Reunion is one of the best musical experiences I’ve ever had, and a day I’ll never forget.

Luck Reunion took place on 15th March 2018 in Luck, Texas. For more details about the event, head to luckreunion.com. Photos without credit are by the author. Watch a highlight reel from the event HERE.