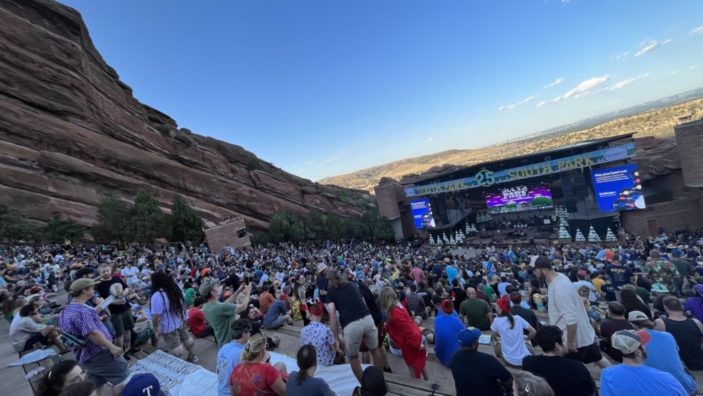 In what became some of the hottest tickets of the year, the first of two concerts celebrating the 25th anniversary of South Park was held tonight just outside of Denver, Colorado, at the iconic Red Rocks Amphitheatre.

The shows are being filmed to air later this week on US network Comedy Central, the home of South Park, and featured live performances from Primus (who did the show’s theme), Ween (who have appeared on the show) – and of course the show’s creators Matt Stone and Trey Parker, accompanied by full band and a small choir.

Like other animation focused events before it, such as The Simpsons at The Hollywood Bowl, the night was a celebration of the music from the show, as well as a look at some favourites from the Stone/Parker catalogue – alongside performances from Ween and Primus. Or, what Trey Parker called the “Real Music” of the night.

Though we didn’t know that’s what the night would be on entry; the common consensus amongst attendees as we entered the venue was that no one knew what to expect. And as a result, the anticipation was fierce.

The stage was set up so both Ween and Primus could be on stage at the same time – and indeed they were – collaborating on each others songs throughout the two and a half hour show (which led Les Claypool to proclaim their new band “Primusween”), as well as the music of the South Park creator’s.

Of course, Primus played the theme song from the show (in all its incarnations), alongside plenty of their fan favourites, like “Jerry Was a Race Car Driver”, “Wynona’s Big Brown Beaver”, “Too Many Puppies” and their cover of Rush’s “Closer to the Heart”, with Matt Stone on drums (playing very, very well I might add), which kindly followed “Blame Canada”. A song which had a notable lyric change, as “…and that Bitch Anne Murray Too!” was changed to “…and that slut Ryan Reynolds too!”. Perfect.

Songs from South Park: Bigger, Longer and Uncut featured throughout the night, and got some great singalongs, while songs from their musical The Book of Mormon, Team America: World Police (“America, Fuck Yeah!”, closing out the night) and even Cannibal! The Musical made appearances.

Ween, meanwhile, played songs like “Take Me Away”, “Roses Are Free”, “It’s Gonna Be a Long Night” (which was their first song of the night to see them accompanied by Primus) and “Voodoo Lady”. Both bands made the most of the fun evening, and the music and laughs didn’t let up for the whole night, as the South Park characters were projected onto the iconic rocks in the iconic natural Amphitheatre.

You can check out the full setlist HERE.

Want to see what else went down?

South Park: The 25th Anniversary will air on Comedy Central on 13th August, and stream on Paramount+ from the next day. A second show will be held at Red Rocks tomorrow night, 10th August.

Those in Denver can also check out the South Park: The 25th Anniversary immersive exhibit in McGregor Square on August 11th and 12th, from 10am to 6pm. Learn more about that HERE.

The author attended the event at 9th August, with kind support from Visit Denver and Colorado Tourism.