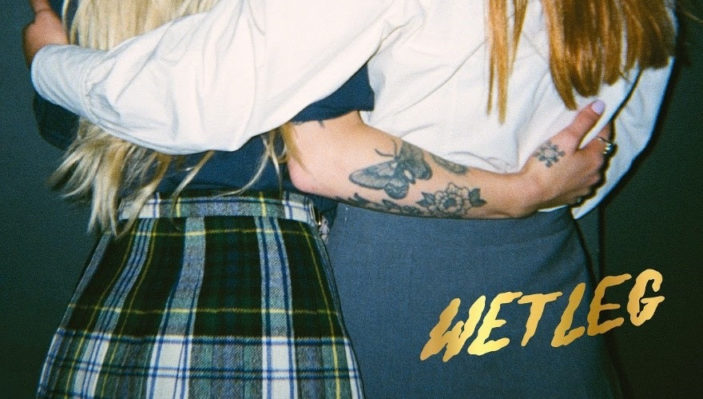 Wet Leg feels like a band that would have absolutely dominated that teen blog/ tumblr period of 2007-2012. Maybe it’s because I was at the peak of my awkward teen powers in that period, but having listened through the self-titled debut album from The Isle of Wight act a couple of times now, their sound has thrown me back more than a decade to a time where trying to being cool and unique in an online space was a lot more time consuming than it should have been (please keep in mind I wasn’t allowed social media or anything of the like while at school, so this is all purely anecdotal from friends who did).

With a sound wedged in that mysterious and chaotic vibe somewhere between Yeah Yeah Yeahs, Le Tigre, Gossip and Metric, there’s been an incredible buzz surrounding the English group for the past 12 months that could (and honestly probably will) transcend and connect to generations past, present and future. After bursting out with the inescapable “Chaise Longue” in the middle of 2021, Wet Leg has continued to release a flurry of catchy, hook laden and slightly sardonic hits over the past six months or so, all of which have managed to make it onto their debut.

While it makes sense to lead into your debut album having released a couple of songs, Wet Leg has gone one step further and by the time of release, they have already released half of the songs on the album. Some may interpret this as showing their cards too early. I’m here to say, yes they have shown their cards, but luckily for the band, it’s just about a royal flush.

There’s seemingly two levels to Wet Leg songs: frantic and erratic, as well as calm and reflective. For the most part, the singles sit with the former. Lead single “Chaise Longue” spends its first minute puttering along before the manic guitars of the chorus kick in and fully drag you in. It’s almost the perfect debut single to be honest.

Other singles like “Wet Dream” and “Oh No” both clock in at under two and half minutes, which leaves each song with plenty of killer and hardly and filler. They’re both the type of track that will fit incredibly well in any part of a live setlist or in a dj set (maybe it’s just me, but “Wet Leg” has the same energy as the Icona Pop classic “I Love It”).

One of the biggest take aways from the album is the willingness of the band (fronted equally by Rhian Teasdale and Hester Chambers) to be just a little bit silly and woozy, all the while catching the listener unaware of how they’ve just pulled you in and trapped you into another three minutes of effortlessly flawless guitar pop.

Opening track “Being in Love” sets the tone almost immediately with the humourous takes of the album with the lyrics ‘I feel like someone has punched me in the guts/ but I kind of like it ‘cos it’s like being in love’. It draws the listener in and makes you realise the band is just like you and me; there’s no pedestal they’re on looking down at the rest of us plebs from. “Ur Mum” wins the award for best phallic reference, while the chorus and bridge gets points for its bounce and ability to instantly get stuck in your head.

While the chaos might be what draws lots of fans in on listens one and two, it will be the more reflective and sincere moments that stand out on the album. “Piece of Shit”, “Loving You” and closer “Too Late Now” are the album’s pinnacles and help differentiate Wet Leg from many of the other great hopes their homeland’s press latch onto seemingly every six months.

“Loving You” is light and wistful and dreams of the better times in a failed relationship, while “Piece of Shit” feels like it could have featured on the Juno soundtrack.

The most complete and thorough of moments on the album is “Too Late Now”, three and half minutes of undefeated greatness. Building over its entirety before culminating in a flurry of raggedy guitar licks over its closing minute, “Too Late Now” is the best song on the album and Wet Leg in their truest and best form.

In spite of all the buzz and hype, you may as well call Wet Leg Australia Post, because they’ve well and truly delivered here with their debut album. With a sound that will hit close to home and resonate with many listeners (whether that’s in their prime or during their blog phase ten years ago), Wet Leg has come through with the goods on a release that I am more than confident will end up on plenty of end of year lists.

FOUR AND A HALF STARS (OUR OF FIVE)

Wet Leg is out Friday 8 April.