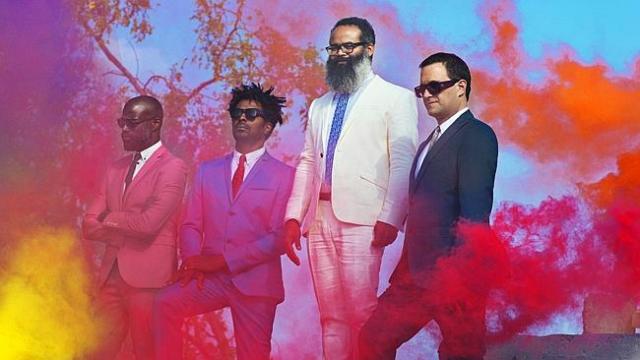 As we reported last night, the lights have come down for the 7th year at Vivid Festival Sydney, but not before one last show helped light up the Sydney Opera House – as its sails glowed with animated lights outside. Brooklyn quartet TV on the Radio held the honours, playing as a six piece in the venue – trombone and all – supported by the one and only Kirin J Callinan.

Indeed, Kirin opened the show, dressed all in white, making his debut in the room. Remarking simply, “well, this is nice”, he kicked off his set solo before welcoming his brother Tex onto the stage for a few songs off his internationally acclaimed record Embracism, including “Landslide”, the audience requested “Way To War” as well as the title track – which was a highlight of the set.

By the end of the set, as he performed a music-free “half” version of “I’m a Toddler”, requesting the crowd use their imagination, several audience members were telling him to “fuck off” as he wore his grin, and danced his dance. And in that moment, you knew he had done something right. Kirin has made his mark by being unique, by being adventurous, and (to a lesser extent) by pissing precious people off. To see him do it in the surrounds of the Opera House (by request of the band, so I’m told) was a beautiful thing.

And to give us a taste of what might be coming next for the talented Sydney artist, he invited his father onto the stage , as well as Alex Cameron, accompanied by a Saxophonist (“after all”, quipped Kirin, “when you play the Opera House, you invite all your friends to play with you”), to deliver us a rare song sans Kirin on guitar. Almost a smooth jazz number with Kirin at the helm. And it was damn fine. With lyrics along the lines of “you’re not my teacher”, it may have also been the first time that someone has essentially sung in a Baby’s voice in the venue (with effects, but still…). Though, we all know how weird Operas can get, so maybe that’s far from the truth.

All in all, as we could only have anticipated, Kirin couldn’t have sounded better in the venue. But this was TV on the Radio’s night, and the room was bursting in anticipation by the time they hit the stage. They launched into the show with “Young Liars”, off their early EP of the same name. It’s as good of a song now as it was then, and they’ve only made it better over the years. It immediately sucked you into their musical world, which only lasted a little over an hour, but didn’t let you go until you were free from it. Though some favourites like “DLZ” were not included, the 14 track setlist was split equally between their new record Seeds and fan favourites from their back catalogue.

They delivered the sort of set that the venue deserved, and it wouldn’t be the last time they would grace its stage (their second show was tonight), but really all this just reinforced to me what a solid live band they are. Over the years – some 10 now that I’ve been watching them perform – they’ve never disappointed. And tonight was no exception. Don’t miss them as they continue to tour Australia!

TV on the Radio Setlist:
Young Liars
Lazerray
Golden Age
Happy Idiot
Could You
Seeds
Winter
Wolf Like Me
Careful You
Blues From Down Here
Trouble
Repetition
Encore:
Dancing Choose
Staring at the Sun

Though Vivid Festival officially ended last night, the band played one more show at the Opera House tonight with Kirin, and are continuing on to Brisbane and Melbourne. For dates around the rest of the country, head to: http://www.tvontheradio.com/.