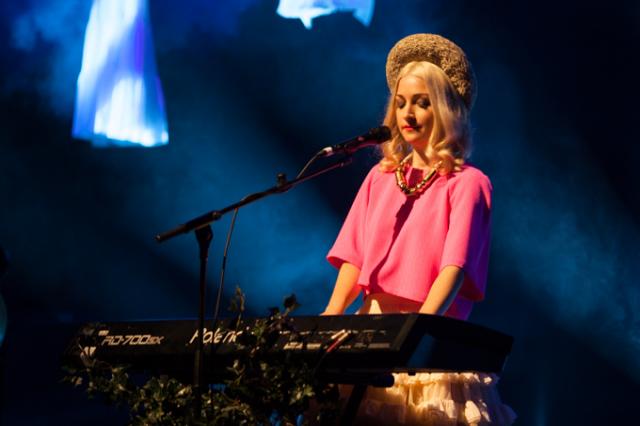 There are few voices in the Australian music scene that are as ethereal, magical and awe-inspiring as that of Kate Miller-Heidke. We are all the more fortunate for her veering down the path of the alternative indie pop scene, than sticking with her classically trained operatic roots. Tonight’s performance is a fairy-tale showcase of how Heidke has blended those two together to create her own unique live style.

Our set tonight is kit out with some basics; an electric piano with some fake vines draped over it, some microphone stands, a couple of guitars, tambourines and one grand piano off to the left of stage. Hanging above were a dozen white dresses of varying styles and shapes and more vines hanging between. It looked a bit like something out of a ghost laden fairy tale. Beginning with “Offer It Up”, which is also the opening track on her latest record O Vertigo!, Heidke, her guitarist/husband Keir Nuttall and her three backing vocalists fill the theatre with voices, and it sounds like we’re in the presence of gospel singers.

One of Heidke’s best traits as a songwriter is her knack for writing wonderfully quirky but relatable songs. “Lose My Shit” guides us through that feeling of having a crush on that special someone and how silly we react in their presence. Not only do we get such an adorably eccentric song, but nobody can cuss as sweetly as her either. When it comes to unique tracks, “Drama” is quite possibly one of her best, recruiting Nuttall to fill in for her normal duet partner on this track, Drapht, and getting him to channel his best rapping skills. In this more acoustic styled setting, it has a very jazzy hip-hop sort of vibe and is nowhere near as cluttered as the recorded version. The other duet-based highlight of the evening was when she invited Josh Pyke onstage to perform “Share Your Air” with her, in place of Passenger. It’s a charmed and simplistic rendition that genuinely got me a little weepy, it’s romantic in all the right ways without being overly saccharine.

Another reason to love Kate Miller-Heidke is how she comes across as a bit of a larrikin; she has endearing stories to tell us before or after certain songs, like how her track “Caught In The Crowd” is being used to teach kids about bullying. In particular, she’d received a letter from one student who thanked her for the song but the only reason he was writing to her was because his teacher had made him. Or, when she reassures us that it’s her friend and not her who ended up traumatised due to the contents of the song “Sarah”. Then, there was the first time she ever heard one of her songs played on the radio; it was for a ‘hit or shit’ style segment, turned out the song was “Words” and the single lone caller that rang through said he’d rather scratch his bowels out with a stick than hear that song ever again. Too bad for him, ‘cos Heidke is still playing it now, some seven years after it was released.

The back half of her set treats us to a moving cover of The Divinyls’ “I’m Jealous”, that was stripped right down to breathy melancholic longing with green lit haze washing over her. She lightens the mood by encouraging us all to join in on a singalong to “O Vertigo”, which admirably about half the audience partook in, the other half giving up on such a tricky task. Keeping up with Heidke’s operatic sometimes yodel is not really worth the embarrassment for some of us. Crowd favourite “Last Day On Earth” really brings us back to that dream-like state we began in at the start of the night. For her encore, we’re given two more songs, a hilariously adorable cover of

Vivid Sydney has been progressively getting bigger each year, and thankfully the VividLive component of the festival has managed to keep up with an exceptional calibre of musical artists to aurally complement the insanely beautiful light displays that keep us visually occupied.