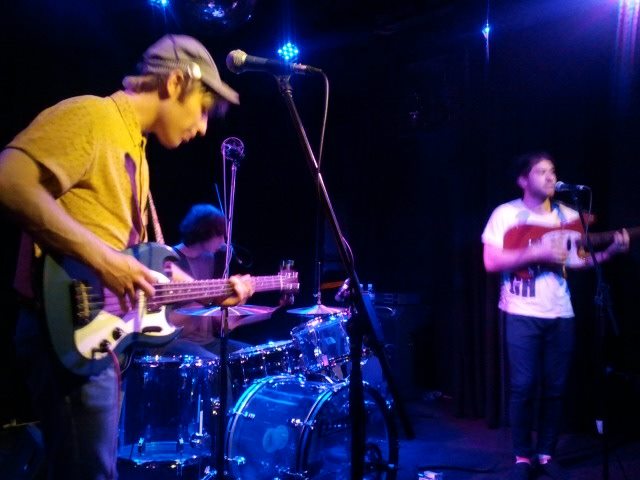 A few brave souls withstood the sweltering heat to witness Brisbane’s DZ Deathrays in action. The two piece have a massive sound that goes off live and while it’s obvious they’ve digested a lot of DFA1979, there is enough of their own personality in the music to overcome their influences. Their set was very polished and their energetic delivery which saw both Simon Ridley and Shane Parsons thrashing around onstage as they whipped up a ferocious, sweaty wall of distortion made for engaging viewing.

I find it disconcerting given the quality of their musicianship, intensity of their performance and the love they’ve been getting from the international press, that they don’t have more of a following in their home country. Which is a shame as DZ Deathrays put on a fierce display worthy of a much bigger crowd then was present that night.

The band room filled substantially as the curtains opened and Ruban Neilson humbly introduced himself and the band. This was Unknown Mortal Orchestra‘s first ever show in Melbourne and they didn’t disappoint with their 60’s/70’s influenced psych tunes sounding even better live then they do on record. The three piece are an incredibly tight live act who feed off one another to create an immensely pleasurable vibe that had the crowd bopping around despite the humidity in the band room. Neilson’s genteel manner was very beguiling and seemed to satisfy the audience even though their set barely lasted 40 minutes.

HIghlights of the night included ripper renditions of “Thought Ballune”, “Jello and the Juggernauts” and Neilson asking us all to dance to “How Can You Love Me”. The night ended with “Boy Witch” and the glorious “Ffunny Friends” before they boys thanked us all for coming, seeming genuinely surprised at the large crowd that rocked up to see them play. Unknown Mortal Orchestra are a very impressive live band who play with a fun, relaxed energy that was made for the good times. If you weren’t one of the lucky ones who scored a ticket to Meredith then you catch them playing at the Northcote Social Club on December 10th.