Travel Diary: This Way North (Melbourne) reflect on recording in Nashville and performing in New Orleans 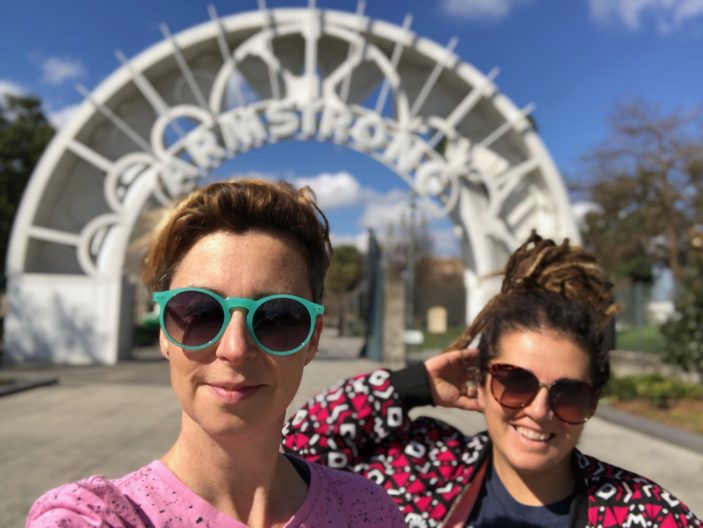 Back in January, in what feels like several lifetimes ago, we were lucky enough to get to head along to New Orleans for the annual Folk Alliance conference and festival. One of the Aussie acts performing at the event, Melbourne duo This Way North, were fitting in shows there amongst a longer trip in the US that took them to Nashville to record their latest music. As we all sit in isolation back in Australia, we caught up with the band and asked them to take us back to their experience travelling around the South of the USA, where they’ll give you a tip or two about the incredible cities they spent time in, and even show you how to build a bass drum out of a suitcase!

After flying God knows how many hours from Brisbane, via Sydney to Dallas, sprinting to catch our final flight to Nashville we landed in the rainy Music City on a cold grey Friday afternoon. Like most when you fly long haul, we didn’t really grasp where we were for a couple of hours until sitting at a bar ordering our first lot of chicken wings. Then it hit us, we were in Nashville to record our songs! It was hard leaving Australia when we did (Jan 3). The bush fires raging through so much land, both our bellies dropped when we saw a mushroom cloud of smoke billowing across our gorgeous homeland the front page of the New York Times.

I think one of the best feelings is waking up on the first day in a new country. It’s so exciting, it feels like anything could happen! We were lucky enough to stay at the small cute cabin-like studio apartment at ‘Alex the Great’ studio where we would be recording. Four poster bed, bizarre toucan wallpaper, the smallest kitchen known to womankind. Everything just the right amount of weird for the next two weeks of creative bliss.

We headed to check out a bit of the city, visiting the Musicians Hall of Fame 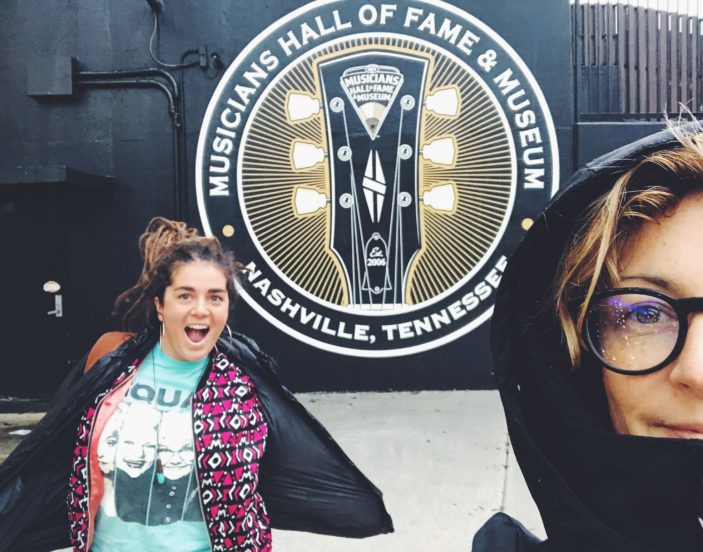 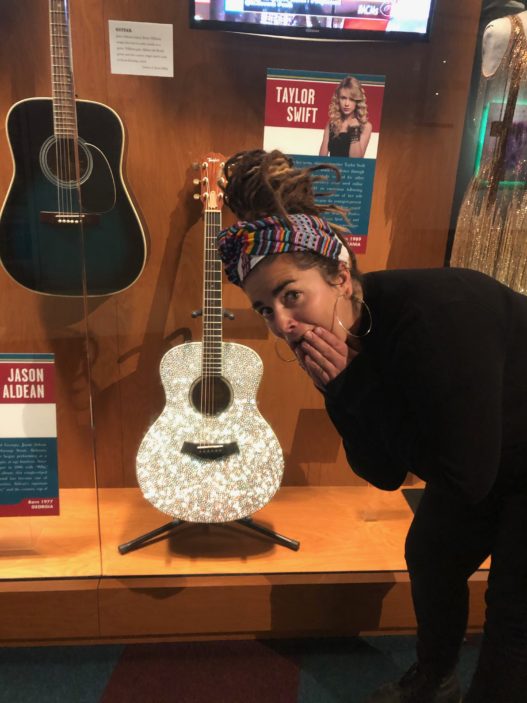 It was pretty incredible even for someone like Leisha who isn’t necessarily into country music. We saw Elvis’ gold plated Cadillac and plus some pretty incredible and old banjos, harmonicas and acoustic guitars. We stopped off for some ‘Hot Chicken’ (spicy fried chicken) a Nashville speciality, then headed back to prepare for our first day of pre-production. 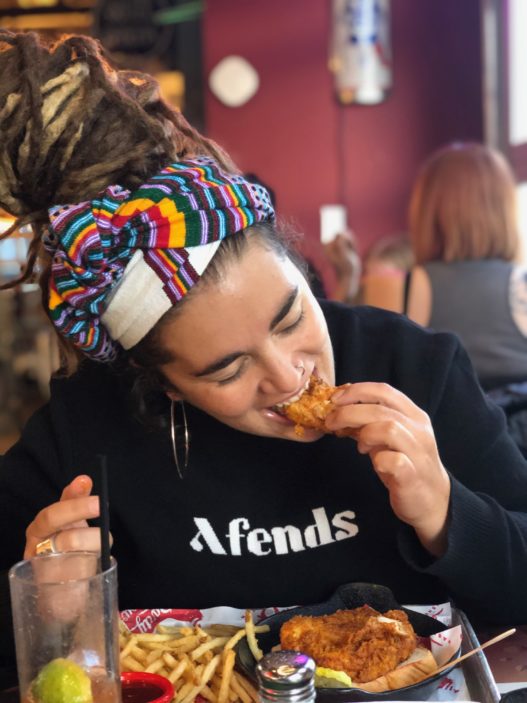 But while we’re talking food, Nashville has some amazing places to eat if you like fried chicken or smoked meat but if you ask for a salad, let’s just say, it’s not a local forte. 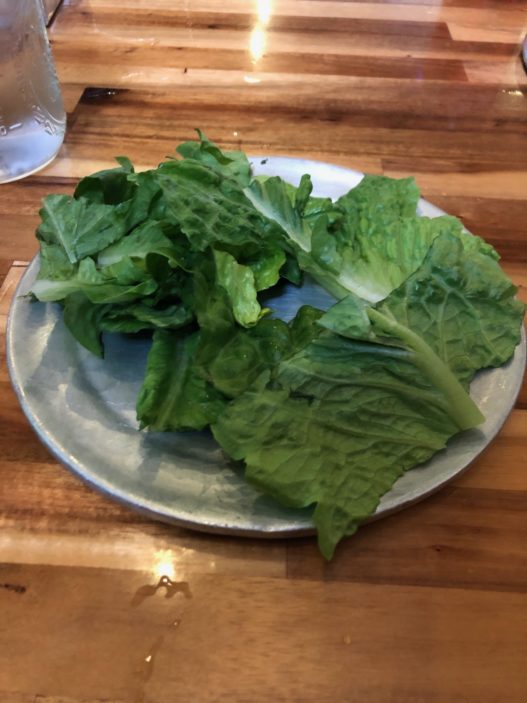 Recording (the days become a blur)

Working with Brad Jones (producer) was an absolute blast. 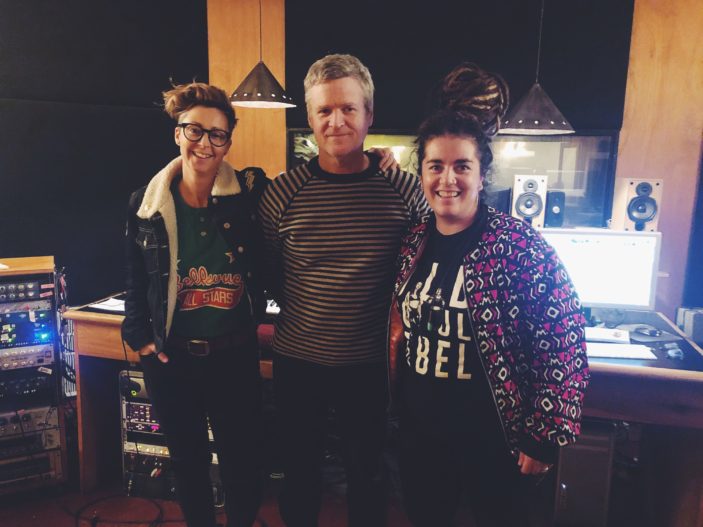 He was a gentle genius!

Taking our songs places that we were so happy with whilst also allowing us to remain true to the songs and feel like we were able to get our thoughts, voice, guitar tones and drumming style captured just the way we like. 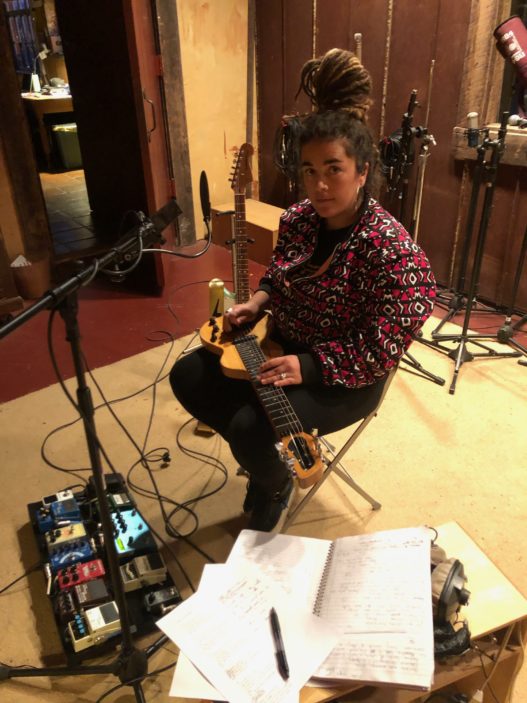 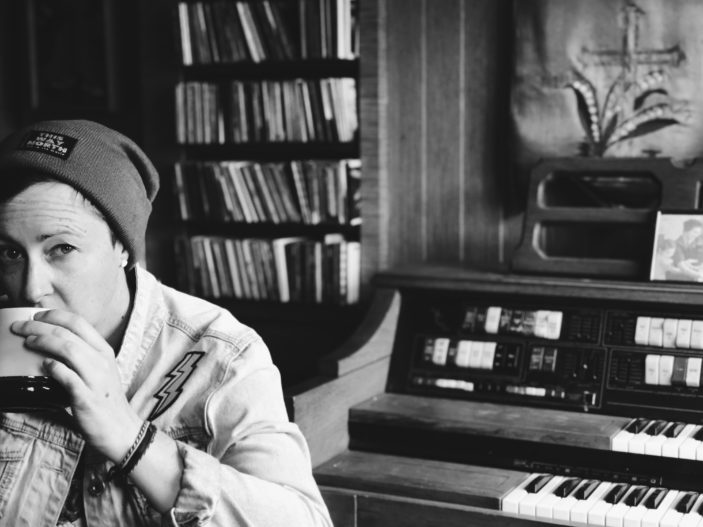 Recording in Nashville was such a wicked experience because nearly everyone we met was doing something creative in that city, painting, singing, writing, recording, sculptures and everyone was really encouraging of each other and their art forms. Plus we got to go out most nights and hear the most incredible musicians who were masters in their genres. 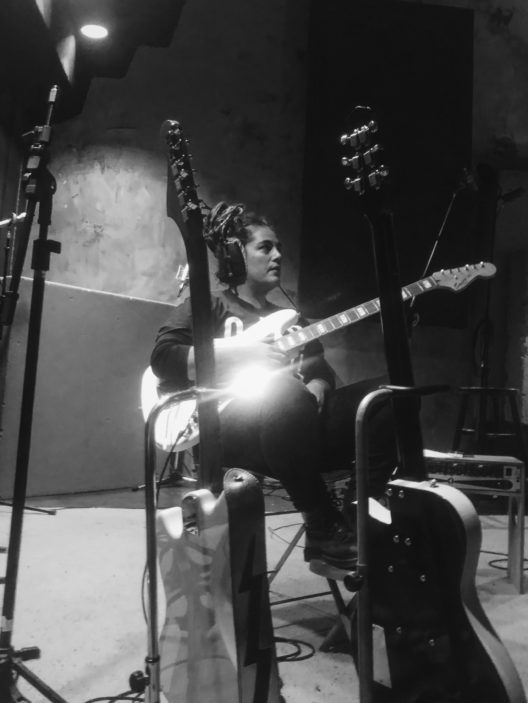 We caught some bluegrass at the original Station Inn where the likes of Dolly Parton, Alison Krauss and John Prine cut their teeth. We found a tiny little dive bar called Brown’s Diner, where the Everly Brothers used to go and drink. They had amazing blues, jazz. We also caught one of the ‘Wooten Wednesdays’ at Rudy’s Jazz Room, where Reggie Wooten would take a supergroup of local musicians into a cosmic trance playing jazz standards and soul covers.

Everyone we saw looked like they had been playing since they came out of the womb. The depth of the music culture in this city is brilliant and inspiring and being in a city that celebrates and respects music to such a degree is insane… I mean check out the parking! 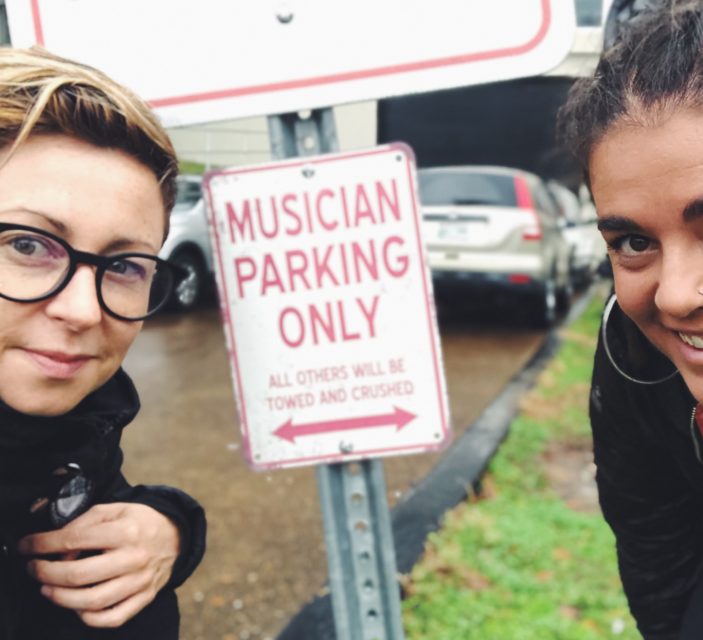 We finished up recording in a couple of weeks and treated ourselves to a drive into the Tennesse countryside, it was gorgeous. The classic rolling hills, farms, and some beautiful waterfalls. 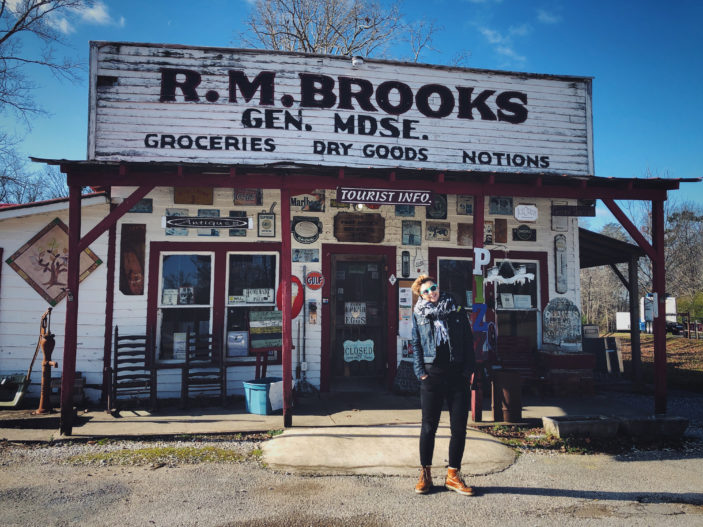 The perfect setting for our fave tour van game “Your House” where you basically call out the crappiest, most falling down barn or house you can see and yell out “YOUR HOUSE”! 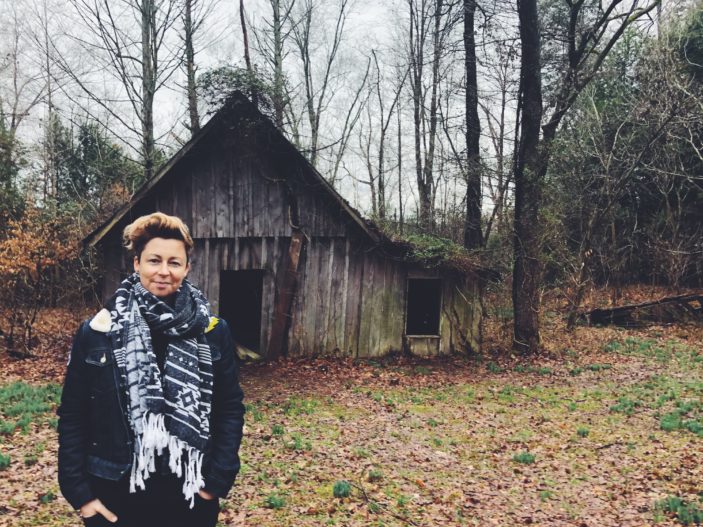 Before we knew it we were heading down to ‘The Big Easy’ of New Orleans, Louisiana! 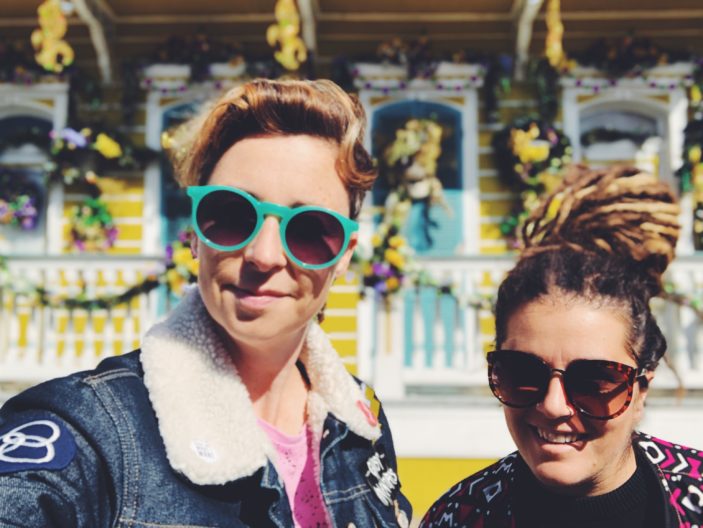 We were picked up by Leisha’s cousin, glittered our faces and got taken straight to a parade, complete with second-line brass band. We marched around a park with 100’s of lanterns lighting the night sky.

How can we describe 4 of the craziest days of our lives? 3,300 people descended on the Sheraton Hotel in downtown NOLA to take part in the Folk Alliance International Conference. 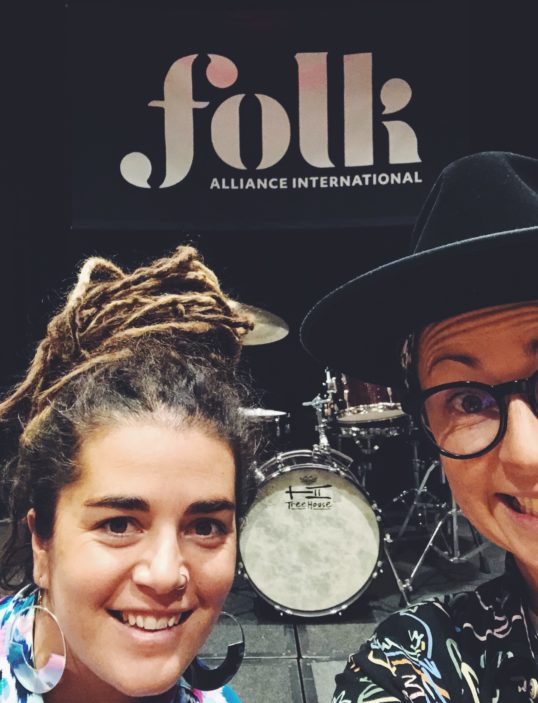 The days started at 10 am and finished at 3 am. It was like four days rolled into one. We took in as much during the day as we could including Ani Difranco speaking about her new book, Mavis Staples giving the keynote speech and a free photoshoot. Then we rested as much as we could before starting our unofficial showcasing in the hotel rooms from 10.30 pm until 3 am each night.

There were 4 floors of showcasing rooms, they were just regular hotel rooms. The room hosts would have the beds removed and decorate them so they don’t look like a hotel room. Some looked like campsites (complete with bird sounds and a crackling fire on the TV), psychedelic hippy rooms from the ’70s, French cocktail lounges, farms. You could walk into one room and a band would be playing then walk into the next room at it was another different world, with decorations and different styles of music. MUSIC EVERYWHERE! In the hotel lobby, foyer, stairwells, and hotel rooms. Not to mention the incredible street performers just outside in the French Quarter.

We had our Offical showcase Friday afternoon at a respectable time of 4.30 pm, it was an absolute blast and I’m proud to say we got a standing ovation. Our unofficial showcases were just as fun with Cat playing her ‘suitcase’ drum kit she made especially for Folk Alliance. 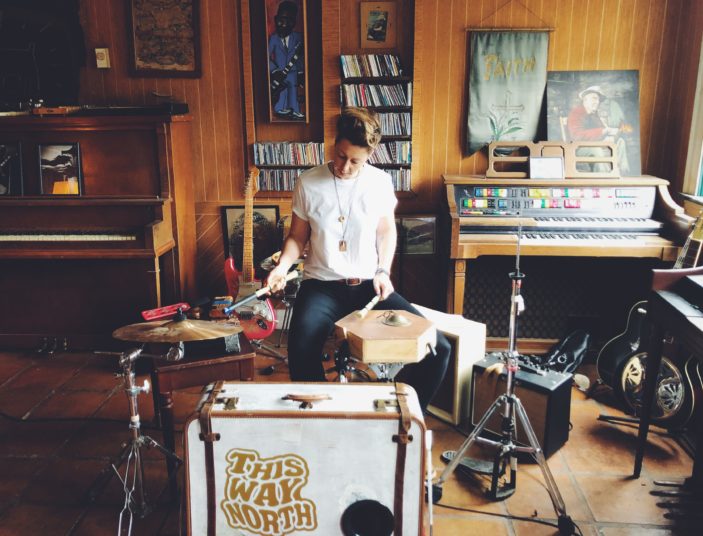 See how Cat made it here:

After 4 days of no sleep and music ringing in our ears, the conference wrapped up. We had one last party, visited a real swamp… 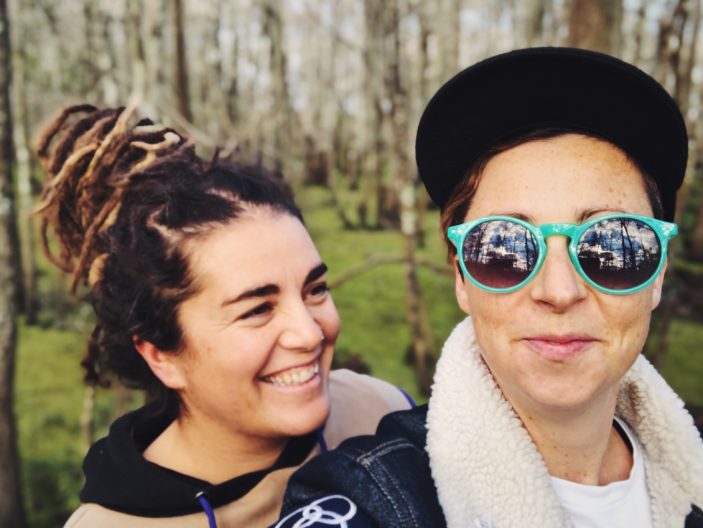 …ate some more cajun food including Alligator and crawfish (yabbies); then before we knew it we were back on the plane flying across the big pond and home to Australian soil.

This Way North’s 7 Places to Check Out in Nashville

Wednesday nights – Wooten Wednesday’s at Rudy’s Jazz Lounge
The Station Inn – Bluegrass institution
Brown’s Diner – An old train carriage converted to a bar in the 1920s. Was a regular hang out for the Everly Brothers.
The Musicians Hall Of Fame
The Basement East, if country is not your thing, head to East Nashville for amazing indie bands.
Grimey’s Record Store in East Nashville
Fanny’s House Of Music – which boasts on being a musical instrument store that is comfortable for ALL, especially women, children, and beginners.

For more on the band, head to the This Way North Official Website. You can support the band by becoming at Patreon, or getting yourself some merch or albums courtesy of their Bandcamp page.