Track by Track: The Finks talk us through The moment the world rushed in 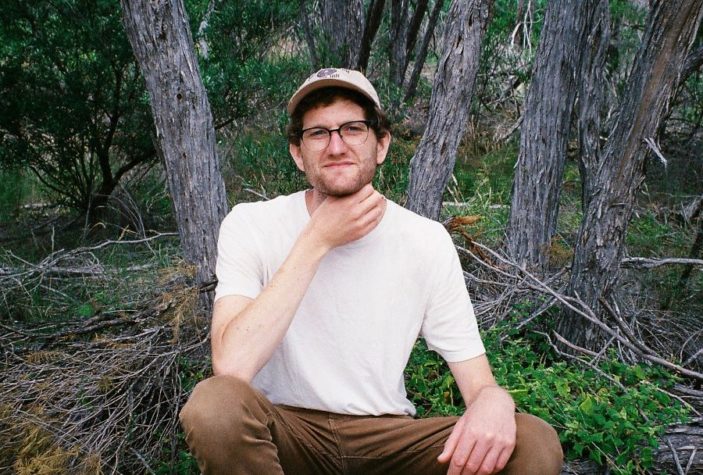 The Finks is the musical project for Melbourne songwriter Oliver Mestitz. Today he is releasing his six-track EP, The moment the world rushed in. This is a beautifully textured and delicate collection of songs. Five of the six tracks are instrumentals, with the title track containing vocals.

The songs on the EP are a mix of folk, jazz with some classical leanings. It’s meticulously put together, with analogue and digital effects, loops, some clarinet and keys, guitars, rippling snare drums and shimmering cymbals. Despite being overwhelmingly mellow in nature, its beauty is such that it can’t help to act as a pick-me-up. It’s a tonic for any situation.

The record was put together in Oliver’s apartment during the pandemic. You can imagine the tinkering as he brought into play so many varied sounds into the mix. Demonstrating his multi-media capabilities, Oliver has put together a zine of “bleakly funny vignettes about the lives of artists real and imagined, unstuck in time. Each 44-page zine has been lovingly assembled, stitched and stamped by OM,”, which you can purchase with a download of the record, via his Bandcamp. The link is below.

To celebrate the release of the EP, Oliver has put together a track-by-track breakdown. So do take a load off, turn up the volume and have a listen and read of the background to this cracking record.

This happens often: I’m driving the car and a song comes on the radio. It bowls me over, it’s the best thing I’ve ever heard. I repeat its title or a line from its chorus over and over to myself until I’m able to write it down. When I look it up at home later that day, most of the magic is gone, lost in the moment of listening.

I’m a sucker for tremolo. This song would be nothing without it. The mix of instruments and effects recorded on laptop and cassette makes the whole thing nicely woozy and out of sync. An early version had organ and marimba but I eventually replaced them as I learned to embrace the synth.

I could have stayed

I had the first of many synth epiphanies when I heard Mikey Young’s soundtrack to the film Strange Colours. That was the impetus for the arpeggiated synth line in this song. The percussion is mostly me shaking a bag of gum nuts.

The moment the world rushed in

Some songs take a while to come; you have to sort of coax them into being. This was one of them. When I wrote it I was spending a lot of time trying to learn sad jazz standards and fiddling around with a MIDI keyboard on my laptop. What I learned made its way into this song, with its goosebump modulations and hushed refrain.

I first started recording songs when I was eighteen, using a Tascam 4-track at my parents’ house in Hobart. The piano line and bass melody from this song date from recordings I made back then. I had the idea of reworking them for this song when I heard Haruomi Hosono’s soundtrack to the film Shoplifters.

I’d like to be able to make ambient music but my songwriter’s brain is too stubborn. I can’t help falling back on melody and harmony instead of texture to keep a song in motion. These guitar fragments come from loops that I made from old tapes, the ghosts of recordings past.