Track by Track: Joan Banoit takes us through their debut album, Clerical

Working with producer Artefact and mixer Stu Hunter, Clerical is the result of three years experimentation, development, and hard graft. It’s unlike anything else you’ll hear this year, and we’re stoked to have Julian on hand to take us through the album track by track!

I wrote ‘Pastoral Care’ about a close childhood friend I haven’t seen in years. It sounds flippant and obvious but it’s very personal and that’s all there is to it. Childhood relationships hold such power I think, at least they did to me.

The sound design was originally built from intentionally rhythmically conflicting rhythmic samples and long FM synth drones. Artefact built a lot of dynamics into the track through adding a ton of distorted synth-like guitar tones and a lot of droning bottom end. I really wanted this track to be a like a whole universe of sound that gets everything done it wants to in four minutes, which is why we decided it should start the album. I’m proud of how much musical and sonic ground it covers in a short amount of time. That was partly a template for the whole album I guess.

I wrote all of ‘Bet Me’ while my partner Esther was living in London (and I was basically losing my shit). Again, it sounds a bit pat and obvious but human life is most of the time. I initially spent a ton of time getting the initial, very minimal synth sound of this right. Artefact basically came in then and completely ruined my vision by adding these absolutely enormous horn arrangements and even bigger synth freak outs. I’m kidding. I also really love the way Stu Hunter’s mix bring out the tension in the arrangement and really draws attention to its dramatic shifts.

‘Bill’ was the first song written for the album. It was built from a tincy tiny piano sample of a Bill Evans piano track, that I basically just teased out over and over until I had the initial structure of the track. Lyrically (for me anyway) this one is about the way people are often influenced by others and power dynamics in my interpersonal relationships. I find that hard to understand and it often makes me really anxious and to behave in a way I’m not proud of. We’re all posers really. I wanted the dynamics of the track to reflect that, that posturing we all do with each other and the dynamic shifts in the second half (and probably in particular the arpeggiated synth explosion) are all about that.

Look, shoot me, but this is another track I wrote when I was losing my sh!t when Esther was on the other side of the pond. I’m such a sook. It is though that intense feeling where you really want someone so much you actually need to get away, and you possibly shouldn’t be together at that time. Which was fine because we weren’t! I guess this was my first real attempt to try and cover a really wide range of human emotions within a single track and to tell a story emotionally, where there is development. It covers lot of different moods, dynamics and emotional changes and that was very intentional. I really wanted to create a coherent musical emotional narrative within the confines of a single track. No idea if we succeeded but that was the goal.

Musically, you could say we tried to cloud that emotional content a little through partly disguising the raw musical materials with references to other artists we like. Roxy Music and David Sylvian in particular in this track. I think Artefact helped me flesh out my other idea, to combine these references to the past with really contemporary sounds and create tension through the two. That was also very intentional. And Jesus, Stu’s mixing really draws that out in this.

Eva is a basically a fark you to pervy guys at music venues. The term ‘toxic masculinity’ is pretty overused but there’s no escaping what that phrase represents if you’re gigging a lot and not yet playing the Hordern pavilion every night and it can be pretty dispiriting. I’ll let others piece together who says what but that’s the track lyrically.

Artefact and I put a lot of work into the dynamics of this track. We really wanted it to function both as a fairly classical sounding synth rock song but with the sonic detail of more ‘composed’ or arranged music (and a lot of the underground music both Artefact and I really like and draw inspiration from). And we wanted that shit to bite.

God. This is about a lot of things to me lyrically and I don’t really want to spell it out, as I do think the lyrics are pretty open to interpretation as good lyrics should be (not that my lyrics are good). It’s definitely about the need to often compromise with others in your life, even when you’re sure you’re right and don’t need to.

The track has a ton of really big, I think surprising dynamic changes. They’re all pretty complicated and took a long time to construct, both in my initial arrangement and in what Artefact added and developed with me. It was basically a process of trying to get a really large amount of sound (all of which we really liked) to all work together and it took some taming. I do think the horn and drum arrangements flesh out the internal drama a lot and just provide a really great contrast with the harshness of the auto tuned vocals and coldness of the synths. This is maybe one of the best examples of the really special workflow we somehow just seem to organically land on with this record.

I gave my arrangement to Artefact who added lots of sounds and fleshed it out, while really, I think staying true to the vison of my original track. And then Stu just really clarified everything within the arrangement in the mix and helped all of us clarify what sounds needed to take precedence. It just worked. 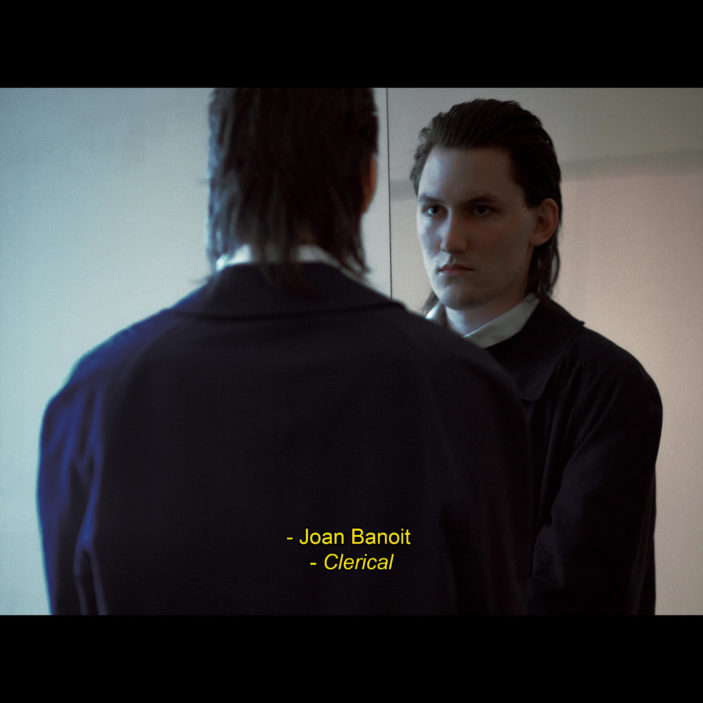 Lyrically this is also about me losing my shit (Seems to be a theme…!), this time when I was forced to become a grown up and you know….get a job. Sometimes if you create any kind of art you stupidly think you’re a superior subset from the rest of the species which is really stupid. But it is hard to find time for both, and it can be isolating and antisocial and this is what this track is about. And it is hard and takes a lot out of you.  We wanted to reflect that in an arrangement that covered a lot of ground, but quickly, without any indulgence, similarly to ‘Pastoral Care.’.

There’s a restlessness in this track that I really like, that I think really captures where I feel like I am in my life right now. But (and again, apologies if this sounds trite) I also wanted this track to end on an optimistic note. I don’t know what the future holds for me or anyone. But I’m going to give it a go, and this was our attempt to ultimately capture that in the end of the track. There’s a catharsis for me when the drums and bass and keys come back in in the outro and I really wanted to conclude the vocal section of the album along those lines.

So look it’s true we were possibly going for a bit of a Berlin Bowie vibe here in ending the album with two largely electronic instrumentals. While I’m a massive Bowie head it wasn’t actually intentional, and just felt like the right way to end the record. I was done singing for a while but still wanted to make music.

Both tracks are really, really personal to me and won’t spell out too much in terms of the inspiration for them, I’ll leave that up to people who engage with the music. This one though is about the part of Sydney I grew up in, that I really, really love. After the often pretty elaborate nature of some of the other compositions on the album, I did also want to simplify the instrumentation and sound design on this, so most of it was composed and played on my Yamaha V50, which is also an extremely personal interment to me and one I grew up playing. It’s like an extension of one of my arms.

Artefact and Stu really let me go on this one and it’s not much changed from my original version, other than some really souped up sonics when it hits full Blade Runner mode in the last section. That was also intentional. We didn’t want this track to be to polished and lose its personality.

Again, I’ll shy away from wording up too much on what I think this means and leave it to others to decide. Will say that to me, both thematically and sonically (and compositionally) it’s about trying and failing to exert control over phenomena and failing to do that. I intentionally set up a series of sonic ideas that are overpowered seemingly randomly by another, either gradually or suddenly.  And I got really interested in the contrast between low fi acoustic sound and synthesis (especially granular synthesis) and how those two seemingly contradictory forces can actually love together and prosper.

A bit like people. So many combinations of people, couples, ideas, groups seemingly don’t make sense but somehow work brilliantly. That’s a concept ad idea I’m attracted to musically over and over again, so I really wanted to finish the alum with an expression of that. I don’t know. We’re a funny lot really.

Thanks to Julian for this great breakdown of the album!

Clerical by Joan Banoit is out now – you can check out a full preview via their Bandcamp.
Stay up to date with all things Joan Banoit via their Instagram and Triple J page.