Live Review: The Strokes run through their greatest hits at Sydney’s Hordern Pavilion (28.07.22) 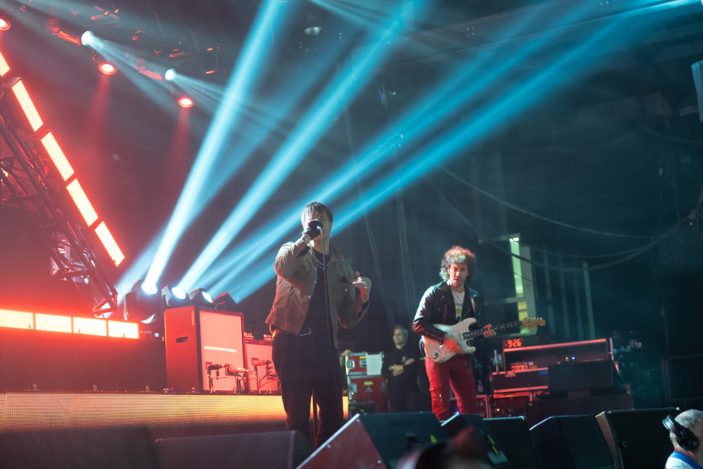 Frontman Julian Casablancas doesn’t seem very happy these days, letting loose with some incoherent quips occasionally while his band, New York’s legendary The Strokes, play through a greatest hits set list for the first of two Sydney shows – sideshows, may I add, to the deflating Splendour in the Grass, which this year was marred by atrocious weather, poor planning and a nonsensical uptick in capacity. His ramblings are blunt and unfiltered, his eyes straight ahead while none of the band members seems to be paying much attention to each other.

And yet, while The Strokes don’t seem like a coherent force on stage, they are still able to put on a thoroughly exciting, crowd-pleasing show as they make a triumphant return to Hordern Pavillion and prove why Splendour in the Grass has a particular love for these indie-rockers.

With value upped by both The Lazy Eyes and The Chats on support duties, it’s a special night for anyone who has missed big-ticket arena indie over the past two years, with all three acts sounding tight and, all things considered, focused as they bump out their respective jams to a very receptive and adoring audience.

The Chats in particular managed to power through some woeful sound issues – it is Hordern, after all – and spin their loveable brand of raw tradie rock to some immense and off-kilter singalongs from the crowd. As joyous as you’d expect.

Not as joyous, however, as the thrill of hearing The Strokes give themselves over to the fans with only one bit of indulgence – a horrible improvised and autotuned jam – preceding the one-two punch of set highlights “Heart in a Cage” and “The Modern Age”.

While Is This It? was given the most love, The Strokes pay attention to numerous albums across their catalogue, even dipping into the Threat of Joy for a career-spanning set list that felt almost sympathetic towards a crowd that has clearly been pining for the band since the last time they were out here.

As disconnected from each other as they seem, each member of The Strokes is given ample time to address their respective talents, best of which belongs to Albert Hammond jnr as he steps into the spotlight for the penetrative licks of “Someday”. His best moment, however, comes towards the end of the night, generously busting out karaoke-favourite “Last Nite” for a crowd that, if anyone pays attention to previous set lists, was not at all expecting it.

And really it’s the inclusion of “Last Nite” that defines this particular show. As cynical as Casablancas may seem, the band still knows how to express love for their fans, avoiding indulgence and just giving Sydney exactly what they want.