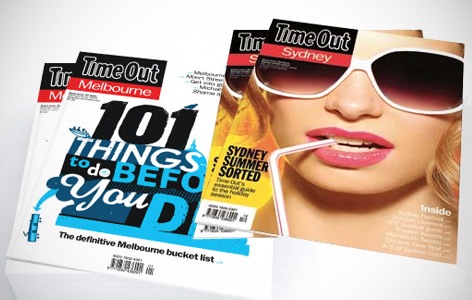 In October 2012, Time Out Magazine Sydney turned five years old – half a million readers later we sat down with Joint-CEOs Justin Etheridge and Michael Rodrigues to look back at the five years of Time Out in Australia, we which bring to you now as we celebrate our own five year anniversary.

Since Time Out has come to Sydney, there have been two major of changes to licensing laws; small bars have been introduced into Sydney, and the allowance for food trucks. Where’s Time Out’s place in this? I don’t think it’s a coincidence that the international brand comes to Australia and then what constitutes an international city elsewhere in the world becomes available here.

As far as time Out being on song with international trends is concerned, I think there’s definitely something in that. We’re part of a network, and there’s cross-fertilisation of ideas. I also think a publication plays a part in shaping a market. Our 5th birthday issue was “the 30 most influential people under 30 in Sydney”, and so we’ve picked them, and they’ve gotten unto the radar for whatever reason, but this will help their career advancement, because then another publication will pick it up and they’ll start to become an authority. So it does become a little self-fulfilling.

I think in the Sydney market, we made a concerted effort to cover bars because that was an area that was under serviced and continues to be under serviced by our competition. I can remember people saying “Melbourne’s got this great bar scene, why doesn’t Sydney have one.” So it become a sort of obvious rallying cry for us to take up.

Looking back at some of your earlier issues, they were very much fashioned on the global model. Nowadays, just looking at the covers over the last 12 months, food seems to have become the focus for the marketing of each issue. Does that seem to be where the interest lies for Sydney and Melbourne?

Good question. Certainly, whatever else Time Out readers do, we know that they are heavily into food and drink experiences. They’re not necessarily fans of fine dining, but they’re certainly looking for that kind of urban experience.

It may not even be about cost. They’re interested in cheap eats, but they don’t mind paying for a dining experience. But they want it to be stimulating and interesting. So it’s not so much about the usual suspects, it’s more about the new. Getting off the beaten track and trying to find those new experiences. Whether it be new menus, or pop-up restaurants, whatever it may be.

So in a digital world, yes we see food and drink trafficking, but we see also festivals, a whole range of subjects that you might expect the Time Out reader to go to. In the print world, you’ve only got a number of covers a year, and I suppose a short and honest answer is yes, a more literal food and drink treatment seems to go down well when it comes to the casual print buyer.

We try to get the balance right. I think if we ever tried to turn ourselves into a food and drink magazine we would be abandoning the Time Out proposition, which is to be this one stop shop to everything that’s happening.

But if you were to ask me what our top ten selling editions off all time were, my hunch would be the ones that feature “best restaurants” or “best cafés”, where Time Out has made a judgement call on a type of eatery.

Is that different to what was very popular with the Middle East version of Time Out?

Not necessarily. I think the type of restaurant or cafe that did well in Sydney or Melbourne was different to Dubai. Sadly in Dubai licensed restaurants are by law required to be part of a hotel complex. You can’t start up your own little restaurant. So the social worlds are totally different.

But I think every Time Out to some level features food and drink in some capacity. The New York edition is driven by the coverage of the city’s bar scene.

Is there any pressure (as I know there has been in other markets) to make Time Out a purely free print magazine?

In the Australian market no. It varies from market to market though. London’s a very specific market, and they up’d the print run from over 80,000 to 300,000. But its distribution model relies on thirty minute average travel times on the tube, and being able to segment the population by postcode. That type of model just won’t work here. We’re not trying to be MX, and for us it’s one of those things that locally, you look at international publishing trends and you draw what you can from that experience and try and deploy it to the business model here.

So we’ll think long and hard before launching a print magazine into another market beyond sydney and Melbourne. It may reflect Sydney, it may reflect Melbourne, or it may be entirely different.

Is there anything you hope happens to Sydney in the next couple of years? From a legislative level, to a meatball shop opening. Or is there something that you foresee happening?

The other aspect I hope changes is the “pokie” culture of a lot of Sydney pubs. I’m not about to dictate what Sydney should and shouldn’t do. But there are some really lovely old drinking institutions in Sydney, these classic pubs, that should be and are as much a part of the Sydney scene as these new pop-up bars are, and you would hate to see them go. But stuffing them full of pokie machines…sure it’s a way to pay the bills, but I don’t no that Time Out’s view is to recommend that you go spend the night in a pub stuffed full of pokie machines. So I think the landscape had only gone a certain way down the road, and there’s a long way to go yet.

What were some highlight of the past year for you?

Very rarely do we get to leave the business and experience the essence of Time Out, outside of working on it. So we went to Wellington, and after we were shown around the city, we were basically left to our own devices to see a Time Out city before the publication arrives. But on the way back to the airport, they stopped us in at Peter Jackson’s studios and put us into the special little theatre, that Peter Jackson has replicated from somewhere in hollywood were they do all there screen testing. So we saw The Hobbit trailer (in 3d, but not 48fps). So that’s one of those hair on the back of your neck experiences, because the tourist guys wanted to open that up to the public, but there’s all manor of issues associated with that. But that was a highlight, certainly.

What does the future hold for Time Out?

The intention is to have Time Out as a full service publication in as many Australian cities and New Zealand cities as we can.

So not only are we expanding geographically, but we’re pushing more into the markets that we’re already in. Next year we’ll see events moving into other verticals beyond food and drink in a more concerted effort.