The Boss kicks some "Tex-Ass" with a star-studded SXSW performance.

When Bruce Springsteen was announced as the keynote speaker for the 2012 SXSW music conference in Austin, Texas, the addition of a one off, intimate show was inevitable. Not only was this added, but tonight, in front of two thousand or so lucky fans at ACL Live, he brought his sixteen piece E-Street Band along for the ride, in the group’s second show in support of new album Wrecking Ball, released March 5th.

The close-to-three hour set focused on tracks from the album, including single “We Take Care Of Our Own”, “Shackled and Drawn” and “Land of Hope and Dreams” (a track which has been played live for quite some time). “The Rising”, “Tenth Avenue Freeze-Out” and “Thunder Road” were among the fan favourites to make an appearance.

Also making a surprise appearance were a plethora of musical guests. Eric Burdon of The Animals joined for a rendition of “We Gotta Get Outta This Place”, after Springsteen admitted to stealing every song he had ever written from the legendary musician, while a hero of Springsteen’s, Jimmy Cliff, graciously accepted The Boss’ invitation to perform three of his most well known songs: “The Harder They Will Come”, “Time Will Tell” and “Many Rivers To Cross”.

Good friend of the band, Tom Morello, guested on several tracks, including “The Ghost of Tom Joad”, for which he added vocals – as he has done in previous live appearances with the band. All this followed Bruce’s own promise to kick some ‘tex-ass’: “We’ve come To Austin to wake you to shake you and to take you to hire ground. We’re here to kick some ‘tex-ass’.”

With Woody Guthrie birthday celebrations going on nearby, The Boss opened and closed the show with classic Guthrie tracks, “I Ain’t Got No Home In This World Anymore” and “This Land Is Your Land”, respectively. The latter saw supporting bands The Low Anthem and Alejandro Escovedo joined by several members of Arcade Fire, Joe Ely and Tom Morello for an epic singalong that left the room in a state of shock, the crowd reportedly breaking twitter as they feverishly tried to report on proceedings (may or may not have actually happened). 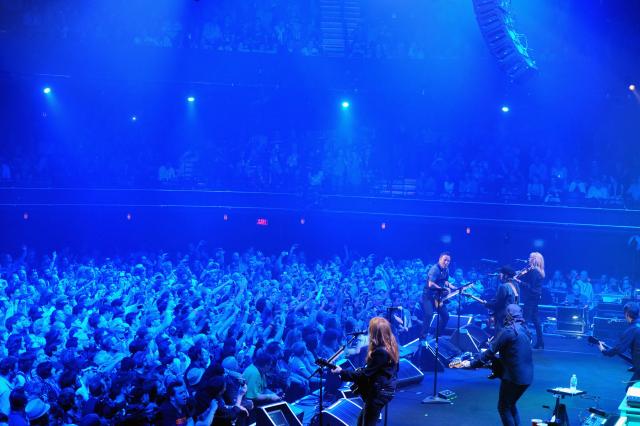 What an evening! This wasn’t the only star studded event to take over the third night of SXSW. Snoop Dogg played the Doritos stage, Lil’ Wayne and friends took over Austin Music Hall, T.I. took over La Zona Rosa, the MTVu Woodie Awards gave us Fun and Santigold (among others), Melbourne’s The Temper Trap headlined Stubb’s alongside Kaiser Chiefs, The Jesus and Mary Chain spilled a crowd into a back alley, while Tenacious D premiered new tracks to a capacity 200 strong crowd. Both Empire of the Sun and Kanye West have also reportedly hit the stage in secret appearances, leaving many to wonder if they’ll pop up again sometime soon. As we said yesterday, your guess is as good as ours.

Stay tuned for more news, reviews, photos, live performances, interviews and more from SXSW 2012, exclusively by the AU review. The full Springsteen setlist is below for your enjoyment and/or envy. Given the amount of official video cameras in the room I’d be surprised if it didn’t show up somewhere online soon in its entirety.

Set List:
I Ain’t Got No Home In This World Anymore
We Take Care Of Our Own
Wrecking Ball
Badlands
Death to My Hometown (ft. Tom Morello)
My City Of Ruin
Seeds
The E Street Shuffle
*Everybody Dance Now Jam*
Jack Of All Trades (ft. Tom Morello)
Shackled and Drawn
Waitin’ On A Sunny Day
The Ghost of Tom Joad (ft. Tom Morello)
The Rising
We Are Alive
Thunder Road
Rocky Ground
Land of Hope and Dreams
The Harder They Will Come (Jimmy Cliff)
Time Will Tell (Jimmy Cliff)
Many Rivers To Cross (Jimmy Cliff)
We Gotta Get Outta This Place (Eric Burdon of The Animals)
Tenth Avenue Freeze-Out
This Land Is Your Land (ft. Joe Ely, The Low Anthem, Arcade Fire, Tom Morello and Alejandro Escovedo)

#BestFestivalForever @Primavera_Sound is picking up for where it left off, bringing together parts of its 2020 lineup with new additions like @gorillaz and @tameimpala: https://www.theaureview.com/music/tame-impala-and-gorillaz-join-king-gizzard-and-more-as-primavera-sound-2021-readies-its-lineup/

As “#Douglas” launches on @NetflixANZ, we take a look back at #HannahGadsby’s 2016 show “Dogmatic” from the @micomfestival: https://www.theaureview.com/arts/comedy-review-hannah-gadsby-dogmatic/