They may have just been crowned champions of Major League Baseball, but the city of Washington D.C. has plenty to celebrate year round, given they’re one of America’s finest hubs for live music – boasting some of the country’s best live music venues, in a thriving scene. It may not at all be what you’d expect from a nation’s capital, but in the same breath, where better to foster a politically charged musical voice than in the city where the politics are made? If doesn’t hurt that it’s a college town as well. So what venues do you have to check out while in the nation’s capital? Here’s just a few of the best that D.C. has to offer.

To say this is one of the most exciting new venues in D.C. doesn’t quite do The Anthem justice – it’s truly one of the best new venues in the world. Built into the new billion dollar District Wharf precinct in the city, the venue has been built into a residential building, with no less than 501 units surrounding the massive 6,000 capacity space. So not only has ample care been put into the sound that goes into the room – and believe me when I say it’s some of the best sound you’ve ever heard in a venue – but they’ve also carefully considered the sound that gets out. This is undoubtedly the example of soundproofing the rest of the world needs to witness. Take their dancefloor for instance, which is floating and absorbs the movement of the guests to ensure that that usual “thump” of a thrashing crowd doesn’t make its way out of the room.

Cities like Sydney can definitely take note… no new building complex should be complete without a multi-million dollar music venue. This is proof it can be done, and done well.

The venue has been put to great use over the past two years, with everyone from the Foo Fighters, LCD Soundsystem, Primus and Queens of the Stone Age playing at the venue in its opening months. I caught Rufus Du Sol there earlier this year and was blown away by the quality of the venue. The sound, pristine, not a bad sight line in the entire venue, and the food they serve there is unreal. You can get Crab Mac and Cheese! A company called Eat To The Beat handle concessions – the same people who cater for artists backstage and also serve the parent company’s other venue, Merriweather Post Pavillion.

The parent company is called I.M.P., a promotions and production company behind iconic venues in D.C. like The 9:30 Club, so this has been made by people with music in their DNA. And speaking of, music has been built into this precinct elsewhere, too: The Wharf also has a free stage of music called the Union Stage.

A venue so good it’s worth the trip to D.C. alone.

Iconic musician Dave Grohl (Nirvana, Foo Fighters and at one point, Scream) has often spoken about the D.C. scene -and this venue – as paving the way for his career, saying, “When I get on stage at Wembley Stadium, I still feel like I did playing the 9:30 Club. It’s the same energy. It really is. Washington, D.C., and the music scene is the foundation of everything for me.”

Having recently celebrated its 35th anniversary, The 9:30 Club is easily the most iconic venue of its size in the region – in fact it’s the most attended venue of its capacity (about 1,200) in the world. A quick look at its website will show you why – it has shows of all genres every night of the week. And its success paved the way for The Anthem – which in turn helped the operators rethink how they were running the iconic space; they recently got a new lighting rig that reflected what they had learnt from building The Anthem to meet the needs of their Performers.

While I was in D.C. a couple of years ago, the venue hosted soulful English singer Michael Kiwanuka, Australian outfit The Avalanches and UK rockers Royal Blood over three consecutive nights. I caught the last of those three shows and was struck by the venue’s sound and layout – they really have perfected their room, which was built on its current site in 1996. The 9:30 Club you’ll read about in books like This is a Call is no more, but locals tell me it carries the same weight and spirit of the original location, which first opened in 1980, holding only 199 patrons.

Four blocks away from the 9:30 Club, the Lincoln Theatre is one of the most historically significant venues in the city. A 1,200 capacity room for seated comedy and music performances, it was initially built as a part of “Black Broadway” in 1922, which coincided with the Harlem Renaissance, spearheaded by local musician Duke Ellington. The venue closed in 1968, after the post-MLK jr death riots – but when the metro opened across the street in 1991, interest grew again, and the venue was reborn. Though unlike its sister venue The 9:30 Club, the building is technically owned by the city, I.M.P. have been booking the venue for many years now. It’s a beautiful space with a mix of live music and comedy taking over the space each night.

The nearby Howard Theatre is also a historic part of D.C.’s “Black Broadway”. Established in 1910 and recently refurbished, the room has a mix of seating and standing, and like the 9:30, offers a mix of genres and performances in its long standing walls. Keeping true to its traditions, I caught a Go-Go band for the “Go-Go brunch” called Be’la Dona, performing on a Sunday afternoon. The space was added to the National Register of Historic Places in 1974.

When talking live music venues, it’s impossible not to mention the most well known in the city: The Kennedy Center. You’re unlikely to see the latest punk rock band doing their thing here, but the building, which opened in 1971, offers a wide array of performances across its three rooms: the 1k capacity Eisenhower room, the 2100 capacity Opera House and the 2300 capacity Concert Hall. The venue also recently expanded, with The REACH.

And though only acts of a certain calibre (e.g. Symphony Orchestras, Operas and the like) will play in its main rooms, in its foyer – which is free to enter and open to guests from 10am to Midnight, 365 Days a year – you’ll find the Millennium Stage, which holds free performances at 6pm every day, sitting underneath what is, architecturally, one of the largest interiors in the world (the high ceilings immediately giving this away)!

And they’re dedicated to music of all genres: The Kennedy Center has their own Hip Hop Culture Council, with Q-Tip serving as artistic director and the council featuring the likes of Questlove, Big Boy, Common, Gina Belafonte, LL Cool J and more.

Even Dave Grohl co-owns a venue in D.C. – the Black Cat. A 700 capacity room which gives plenty of bands their start (from all over the world – with Australia’s Julia Jacklin playing the venue this weekend), the room holds onto the traditions of the city as a place where music can flourish, especially in the modern political age.

The smallest venue on our list, this 250 cap room jumps between serving as a traditional nightclub with plenty of themed nights (like the 90’s Dance Party “Peach Pit”) and traditional concerts, with acts like Circa Waves and Australia’s Hollow Coves just around the corner. The space opened in 2004 and

Owned by some of the same people who own DC9, this space used to be a funeral parlour – and soon will feature Australia’s own Skegss. The circle of life truly continues. The space opened in 2006, and has a 600 or so capacity.

Recently celebrating its 50th anniversary, the Merriweather Post Pavilion sits in nearby Columbia, Maryland and is the fourth venue run by I.M.P. on this list. It’s the premier outdoor venue for the region, sitting alongside the likes of the Hollywood Bowl and Red Rocks nationally, with a 19,000 or so capacity and some of the world’s biggest acts having graced its stage over the last five decades.

Some of the most memorable moments included in 1969, where the venue hosted The Who and Led Zeppelin on the same night. It was the only time the two bands would share the same stage. Jimmy Buffett has played the venue more than anyone else (42 and counting…), and first hit its stage in 1977. President Jimmy Carter joined Willie Nelson on stage in 1980 to sing a duet of “Georgia on My Mind”. Paul Simon, Sarah McLachlan, Santana, Father John Misty were among the acts to play the space for its 50th Anniversary year in 2017, after which it received $55 million in renovations. And yes, it’s the venue after whom Animal Collective named their album. Though funnily enough, the band didn’t actually play the space until two years after the album was released. I guess it was just a dream….

The venue generally seems to be open around the Summer months, from early May to late September.

This may not be a traditional live music venue, but the National Gallery Sculpture Garden offers live music in one of the world’s most unique settings; a true testament to the city’s love for the arts. At Jazz in the Garden, people relax in the National Gallery Sculpture Garden, setting up picnics on a Friday afternoon after work and buying Sangria jugs and beers, sitting around the sculptures or the reflection pool in the middle of the garden, dipping their feet in. It’s a small stage that most people aren’t facing, but the music is played through speakers that run through the whole park. 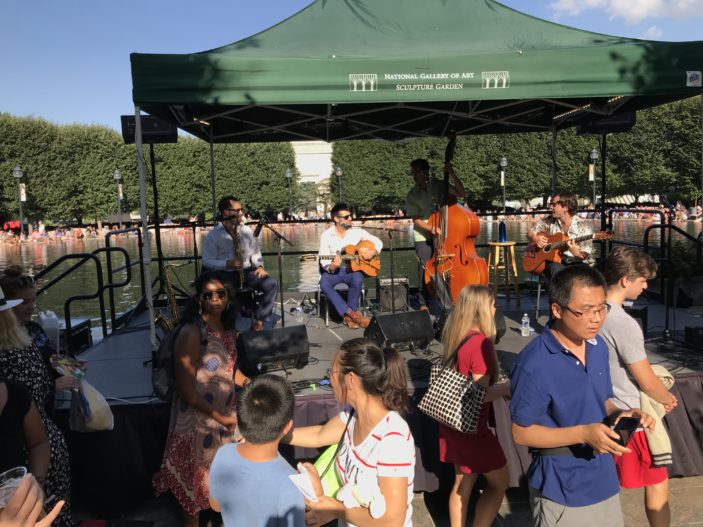 Yeah, that’s as wonderful an atmosphere as you’ll find anywhere in the world, and a great summer activity in the city. It’s worth checking out on Fridays from 5pm to  830pm from May through late August, and it’ll be back for its 20th Season in 2020.

While in D.C. we stayed at the Kimpton Carlyle Hotel Dupont Circle. You can read our review of the hotel HERE.

Photos by the author, where uncredited.