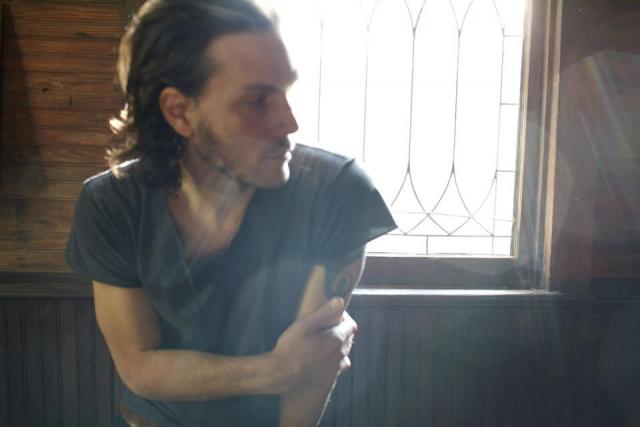 Ahead of the release of his debut solo album, we catch up with singer-songwriter Simone Felice, to chat about his new album, his miraculous recovery from a near death experience, and his plans for the future.

Hey, How are you today?

Good thanks, though it’s still a little early for me.

I’m with you, I woke up at five in the morning today, watching the sun come up. But yeah man it’s good to talk.

So are you on tour at the moment?

I just got back from a couple of shows in Toronto, and my band has flown in from London. Three of my members are from London; I’m putting together this five-piece band to really bring this new album to life. And we’re at Woodstock in my barn. I have an old barn, with a wood stove; its still winter here, pretty much. Winter’s fighting spring. So we’re up here in the barn with the wood stove going, and the fires burning, getting ready for this special show we’re doing in New York City in a couple of nights, just to celebrate the album coming out. And then heading over to the UK for a five week tour, nd coming down to Australia at the end of June, so I’m really looking forward to getting back down there.

So the new record has not long been released? How’s the reaction been to it so far?

It officially comes out in the next week or so, but there’s been a single come out. I’ve really been blown away by the reaction; today we just heard we got a four star review in Mojo, a really great review. And MTV has picked up the video here in the states. That’s a kinda weird and cool thing I suppose. My grandmother watched the video premier on MTV, and I don’t really have a TV, but she called me and told me it went great. It’s just a miracle that I’m alive to have made this record. Honestly Simon, I feel blessed to be able to sing these songs and just to carry on really.

You’ve been a member of a couple of different bands and a number of different projects, what was it that made you want to go it alone a release a solo album?

In the summer of 2010, you might have read, I had emergency open-heart surgery; they had to cut my whole chest open and I almost died. My daughter and first child was born about a month later. The whole thing, to put it mildly, turned my world upside down. It made me take a really deep breath of fresh air, it was almost like a rebirth for me in a way. To be in all that fear and pain and blood, and then to bring my daughter into the world, to cut the cord and hold her, and look in her eyes; it was really this tremendous magical painful transcendental moment.

I was really inspired, and I was on painkillers, really intense morphine after my surgery when I was recovering. I had a bunch of strange morphine dreams, I was having nightmares, so all these songs came out of that moment of nightmares, but also the beautiful visions of that moment, surviving and bringing my daughter into the world. This album and these songs, it just felt like the right moment to beat the dust of my wings and really tell my own story. I’ve been involved in some really great, incredible projects and I feel tremendously privileged to be a part of that. I’ve been through the war, I’ve been through different wars musically, physically, emotionally and spiritually. Now I’ve brought it all back home; back to really telling the story of my own heart, and trying to solve the riddle of my own heart.

Luckily I’ve had the help of my brothers, and the real support of my great friends and brothers, my friend Ben from Mumford and Sons. It’s been a real beautiful journey since that heart surgery. I’ve been recording that record and mixing it now for about a year, a year straight from when after the surgery when I was well enough to sing. So really this is the soundtrack of my deliverance.

You dabble a little in fiction writing as well, I’ve read you novel Black Jesus, do you approach that form of writing in a similar way to the way you write songs?

Yeah I feel like that the inspiration for the story telling and characters all spring from the same well; my love affair and just complete horror at the way the world is. The stories come from the same well, but the medium is different. The discipline of writing fiction and writing songs is completely different trades, mediums, or crafts. I’ve been sort of studying both since I was a kid, writing short stories, writing poems and then turning them into songs.

So Black Jesus was an extension of that. Maybe the best way I can say it, is that for me fiction and songs are like two different trees in the same wood, they’re near one another, they share the sunlight, the rain and the weather, but they stand-alone. But there comes a time, in the autumn or the fall, where the leaves come down and mingle on the floor. I’ve thought of it like that before, I guess that’s a good way to explain it; it’s the way I feel about it anyway. I know there’s a lot of people who do music and write as well, and maybe feel differently about it, but that’s my view on it.

Do you have a preference?

No, writing a book is a very lonely endeavour, so is writing a song for me in this phase of my life. They’re both lonely, but with a song, sometimes you can have a bit more immediate joy and pride. It can take you a day or two or three or a week or more to write a song. A book is going to take you a couple of years, or it takes me a couple of years, I write very slowly. Whereas in comparison it’s really more like instant gratification to write a song I suppose. But every song is different and every story is different.

Are there any particular writers or songwriters you hold as particular inspirations?

Absolutely, I probably wouldn’t even be alive if it wasn’t for Joni Mitchell. Let alone how to write a song. Leonard Cohen, Bob Dylan obviously, he’s the godfather. Neil Young, I love Nick Drake, I don’t know if you’re familiar with him, he’s one of my favourites, an English songwriter who killed himself in the 1970s before he was even well known; he is one of my favourites. Obviously I love the Boss. Those are my favourites, or my gurus I suppose.

So you were here at the end of last year for a quick tour, how was the experience of getting down to Australia finally?

Yeah, it’s taken me a little while. But it felt like the right time to come down, and I got such a great reaction, and shown so much hospitality and good energy and love, so that was really a great feeling. I came down solo with just my acoustic guitar, sang some songs, read from my book and sang songs by myself. So I’m looking forward to coming down this year, after the album comes out, with my full band. So that’s exciting for me to come and show off the harmonies and the music this time as well as the songs.

So you said you were going to be coming back down to Australia in June, is it going to be a select few dates, or a full on tour?

From what I’ve heard it’s the end of june and beginning of July and I’ll be doing Brisbane, Melbourne, Sydney and Perth and a couple of other shows. I think it’s going to be like seven or eight shows.

A pretty busy time then

Sure it’ll be busy, yeah, but I’m looking forward to it.

So other than touring, what does the rest of 2012 hold for you?

Excellent, well that seems as good a place as any to wrap things up. It’s been a real pleasure talking to you today, and enjoy the shows.

Thanks so much man, I’ll hopefully see you down there in a few months.