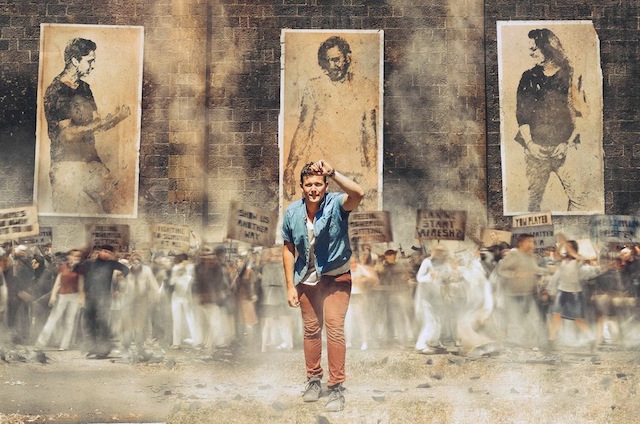 The past two years for Buchanan have been intense; “The highs were high, and the lows were shitty” according to Josh Simons, leader of the band but now that a debut album has emerged from the process, mastered at the all-famous Abbey Road Studios, the group is only looking forward to an even more prolific future.

Another round of hard work begins with the group kicking off rehearsals for a string of live shows to come later in the year. The show is centred on the fresh new tunes off their creation Human Spring. In a world of mp3 streams (Human Spring here) and leaked singles, Simons has just one request to his listeners.

“I’ve been telling people to please listen to it from start to finish – don’t skip a track. I don’t really care whether they’re listening to it while they’re having sex or while they’re eating Maccas as long as they give it a chance. I think the only way people are going to get it is if they do it that way.”

Buchanan has, up to now, been often categorised as a ‘Melbourne’ band but Simons wants to see this label evolve, especially considering their history of national touring.

“I hope that we get past that description because I think we’ve certainly played the country several times now. I understand why we got that – we hadn’t put out an album, we’d been working really hard but we hadn’t particularly done anything yet.”

It was only when exposure to international managers led the group to realise that the fans wanted something tangible.

“They’d say ‘there’s nowhere for them to discover it’. You know what’s going on because you live and breathe it but how the hell is anyone else? It’s reality checks like that make you go – ‘oh shit, we actually do need to actually do the work before we can expect the results’.”

But as far as expectations go for this album, Simons admits that everyone in the group is getting nervous. After more than 18 months of work, it’s a question of how the public is going to receive the music. Positive feedback already reigns on triple j unearthed. Luckily, Buchanan have had a taste of the audience vibes when they performed a selection of new songs during their last national tour late 2012.

“When we did those gigs that was really interesting for the band because we actually got a chance to go back and work on things that we thought would translate live, but ultimately didn’t.”

“I’d say definitely based on that experience we’d definitely do it again,because you actually got to see when people went back to the bar and bought a beer and those moments when people started to dance. It was fairly consistent across the shows and the states as well, so it became really obvious what the strengths and the weakness of the album were.”

“Certainly, when we’re in sync, the audience comes along as well. You feed off the audience and they feed off you. You’re either having an on night or an off night. I think it takes a while as a group to get to that point. It’s kind of liberating but it’s also scary.”

Human Spring shares producer work with Foals and Interpol. as well as mixing from Andy Baldwin (Midnight Juggernauts, Bjork) and Abbey Road’s Geoff Pesche (Coldplay, Radiohead). However, Simons is keen to insist on being involved throughout the whole process and stayed on after studio time as co-producer.

“I think there’s something really nice about actually making sure whatever you wanted to do is on the finished product. If you give it to a producer to finish off, it’s not going to reflect the kind of album that you want, that you thought you were making. I’m sure there are some artists that are absolutely fine with that but that’s just not how we work.”

Simons owns his own record label Raw Imagination People Expect (RIPE). It is partnered with another label, Gigantically Small, and provides the band with the freedom to control their own funding (“I have the responsibility of spending the money”) while receiving support from the bigger fish.

“It’s kind of like the states and Commonwealth situation.” Simons laughs.

Noting the conflict-ridden album cover and name evocative of Arab uprisings – Simons says that he took a backwards approach to songwriting on this album, although that wasn’t his plan at the start.

“None of us are super political. I think watching all that stuff is exciting and it conjures up emotions. I think that’s what we found inspiring as well, feeling something – living in the 21st century nothing makes you feel anything any more. So we thought let’s actually look at the things behind that, why they resonated and then how can we write songs from those things. Even though it was spread out over years of recording sessions. Being able to come back to the same story really helped.”

Although most of the songwriting is attributed to Simons himself, former band members also contributed to the album and so it is marketed as “Josh & Friends”.

“This album was great –we really had a lot of collaborators, which is awesome so in the finished product there are a lot of difference colours there but I think for the next album the plan is just to work out the strengths of the four of us.”

In the upcoming months, Buchanan will set off on a national tour (‘probably September’ according to Simons) with a launch party in Melbourne on June 6. Plans are also in the works to announce an accompanying Sydney show.

Until then, Simons will be in rehearsals, continuing the album promo (“I’d like to think that if you’re a fan of Buchanan there’s an experience you can follow”) and heading to England to continue writing.

“I think it’s a good thing we haven’t blown up yet because when we do blow up, we’ll be ready.”

Human Spring is out May 10. Buchanan will be launching the album at the John Curtin Bandroom, Thursday June 6, with support acts Harts and Clubfeet DJs.