the AU interview: Davis of Front End Loader (Sydney) on the relaunch of the Lewisham Hotel! 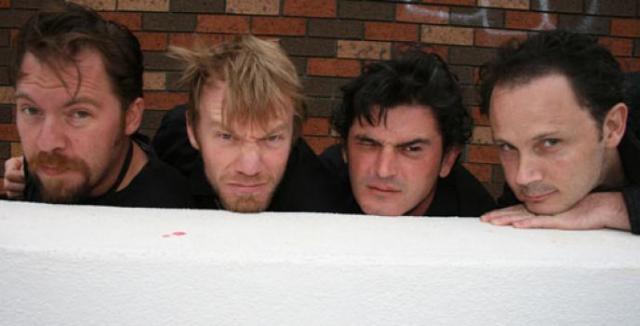 This coming Saturday (April 5th), the beloved Lewisham Hotel in Sydney is officially ‘back from the grave’! Under new management, punters are invited down to celebrate the relaunch of the hotel’s live music program, with this special event set to see performances from the likes of Front End Loader, Chase The Sun, The Lazys and The Morrisons. To get a peek into what we can be expecting from Front End Loader in particular, Davis from the band takes on some of the AU’s questions. Get to know the band on the page and in a live setting – make sure you head down to the Lewisham this weekend and show your support!

Who are we speaking to / what’s your role in the band?

My name is Davis. This week, I am in charge of media spin and any subsequent, necessary damage control for The F. E. Loader band.

What can we expect from your set at The Lewisham Hotel on the 5th of April?

Only Richard Corey, our bass player, could tell you that and I bet he wouldn’t, even if you asked. He writes the set for every show and will never write it in advance. We usually find out about one hour before we play.

What does ‘Rock n Roll’ mean to you?

I refuse to answer questions about my private life. Show some respect.

How important are venues like the Lewisham for the Sydney scene?

Quite. Whilst it is a truly great thing to see many new, ‘intimate’ venues opening, bands who play loud rock music do really require venues that enable them to perform properly. Rock and Rollers have always needed enablers, I’m sure you’d agree. Much as Blood Duster correctly asserted, that “A Track Suit’s Not Appropriate Metal Apparel”, I put it to you, your readers and indeed the broader Australian public that a small cafe is no place for a 12-Gauge Rock and Roll Stage Rampage.

Tell us about your latest album/single/iphone app… what are you promoting at the moment and where can we get it?

We’re currently working on our next release, a single titled “A Small Cafe Is No Place For A 12-Gauge Rock And Roll Stage Rampage”.

If it’s a new single/album, tell us a little bit about the recording process. Where did you work on it and who did you work with?

I would prefer not to, if that’s okay with you, as I don’t think anybody really cares.

Pick one other band on the lineup (or as many as you’d like, really) of this event and tell us a track you love by them, and why…

I like “The Lonely Road”, by Chase The Sun, as it’s an anagram for, amongst other things, “Tenderly Ooh La”.

What else will 2014 bring for your band?

No doubt more shows as appropriate opportunities present themselves. We will also continue to work towards our next album release. Ha ha, ‘work’…….

The relaunch of the Lewisham Hotel takes place from 8pm on the 5th of April. For tickets and more info, head to http://www.lewishamhotel.com.au/event/rock-roll-re-launch-party-saturday-5th-apr/