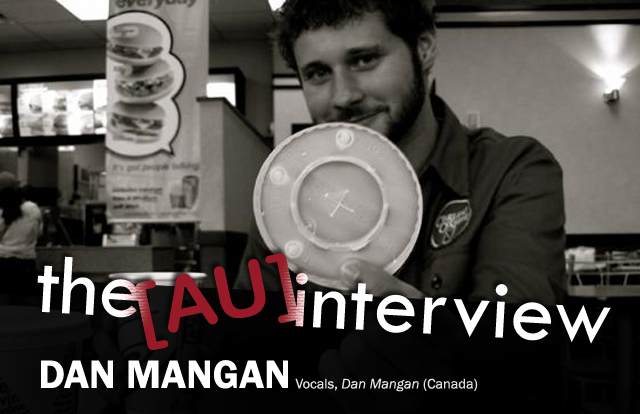 One of Vancouver’s hardest working musicians is a man by the name of Dan Mangan. He’s down in Australia at the moment touring with a swag of special guests. We caught up with the singer/songwriter while he was in town…

Welcome back to Australia Dan – are you enjoying the tour so far?

But of course! The weather hasn’t been exactly what we were expecting when we packed, but it’s great to be back in Australia. So far the shows have been really fun – Australians are lovely people to play for.

Any interesting stories from your last tour down under?

Mostly a lot of raunchy jokes. I was touring with a duo called Folk Uke, who have excellently filthy senses of humour. We had a great time, but were very cautious of “drop bears”. The wildlife here is way more chaotic than anywhere else I’ve been.

It’s been an amazing year – we played Glastonbury in England, met Snoop Dog and Willie Nelson, were shortlisted for The Polaris Prize (Canada’s critic-juried music prize). We’ve spent most of the year on the road and the band and I are feeling pretty fortunate about all the great experiences.

This brings up the next obvious question – is there any new material in the pipeline?

Absolutely. Just before we came to Australia, we spent two weeks in the studio back in Vancouver. We’re going to get right back to work on it when we return to Canada and hopefully will have it finished by April/May, which would mean a late 2011 release here in Oz. I feel like the material has gone in a new direction from the previous albums – it’s less about me and more about the band as a whole – the musical experience has been injected with a lot of different influences. It’s exciting.

How do you, in 2011, approach the song-writing process?

I have to be open to the world to be creative. When I get too focused on the logistics of life I can’t write. I find when I’m watching lots of films and reading a lot of books and listening to a lot of music, I’m much more able to output and produce coherent work. I try not to force it though – I’m usually subtly working on a number of things all the time, but rarely dedicate much time to writing.

Does this differ from how you approached it when you first started writing your own music?

Somewhat. I think to begin with I was just trying to see if I could write songs at all. I was much more inclined to emulate and copy other people. These days, even though I’m still carrying influences, I’m feeling more like I’ve got my own voice and my own things to say.

You reference Kurt Vonnegut with one of your records, where else do your influences lie?

Life mainly – usually it makes things pretty obvious. The world makes a lot of noise so it’s just important to be listening. I think we’re an odd species, us humans. We’re so full of paradoxes – myself (especially) included.

A lot of people reference similarities between Canadian and Australian music –  do you see this as being the case? and if so, why?

I think there are similarities between the experiences of the people in our countries – part of the Commonwealth, large distances between large cities, large land mass with small populations, long histories of immigration, similar timelines of contemporarily formed society. I do hear similarities in music but it’s hard to peg down a whole country in a sound. Currents of thought run deeply through a lot of countries in the western world.

You have played both big and small stages, where do you feel much comfortable?

I like both and seek to continue with both. I came from the small stages, so that feels pretty familiar, but I get excited with a big stage. Energy can be pretty contagious in big crowds, and it’s a different type of experience. If you do too much of one, you start to crave the other.

What can new audiences expect from a Dan Mangan show?

That we shall do our very best.

We mentioned new material earlier, but what else can we expect in 2011?