the AU interview: Coda Conduct (Sydney) on how they write their raps, touring, Childish Gambino and more! 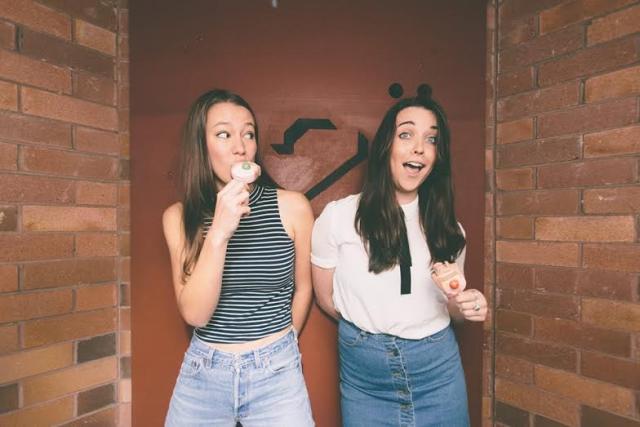 Hip-hop duo Erica and Sally from Coda Conduct are two Canberra born girls taking the local hip-hop scene by storm. With a released EP Butter Side Up, touring plans and supporting actor-turned-rap god Childish Gambino, read what the pair have to say on their career as musicians so far. Click through to read more…

When did you discover that you both shared a love for hip hop?

S: It all came from a conversation we had when we were sitting in a hotel in a tea field in India, about three years ago…

E: That sounds so wanky.

S: Yeah. It’s not as glamorous when you’ve got food poisoning though.

E: Anyway, we’d just met and started travelling together and we got talking about hip hop and suddenly both got really overexcited – I don’t think we’d ever really met anyone who was into it in the same way.

You’re originally from Canberra and now reside in Sydney, what inspired the move?

S: I moved here for uni, about four and a half years ago now. The first half of Coda’s life existed over Facebook chat, because Erica was still in Canberra.

E: I moved up about a year ago, to study but also to avoid catching as many 3 ½ hour Murray’s buses to gigs.

When writing lyrics, what’s the process like? Do you take on separate roles or is it entirely a collaborative process?

E: Usually we come up with a concept for a track together, based on the beat or at least a short demo loop.

S: And then we go away and write our verses separately. If we’re rapping it, it means that we wrote it.

E: But we also give constructive criticism and feedback for each other’s lyrics, which stops you getting too stuck in your own head.

S: Some tracks are very back-and-forwards, whereas others we work really independently. It’s a pretty fluid process.

Your debut EP Butter Side Up was released in March, what was the highlight creating that EP?

S: We started a crowd-funding campaign to fund the EP, and when that campaign kicked off, that was really the first time we realised how many people were behind us for it.

E: We reached our $3,000 target in less than three days. And the campaign was supposed to run for three weeks!

S: That’s when we realised this thing was really happening… Which was pretty exciting.

Groovin’ The Moo was your first official festival debut, can you describe the atmosphere on stage for you both?

E: For a start, it was in Canberra, and whenever we play in Canberra the crowd makes us feel like superstars.

S: We have this cover we do of ‘Round the Twist. I think the best moment of that day was when we started playing it and everyone within earshot started sprinting toward the stage for a giant, nostalgic sing-along.

E: So yeah. The atmosphere was awesome. Can’t wait to play more festivals.

You’re supporting Donald Glover AKA Childish Gambino next week, is he an artist you are inspired by?

S: What’s so stand-out about Childish is the fact that he’s such a Renaissance man. He is just so good at everything he does.

E: I guess we both have aspirations for a heap of other projects, and it’s really inspiring to see someone skip between fields so smoothly. So for sure, we really look up to him and we’re super excited to be supporting!

Triple J unearthed recently had you as their feature artist, is that considered as a milestone of sorts for you?

E: Actually, a few weeks after we were the feature artist, Sally and I were casually scrolling back through the feature artists over the past few years. Seth Sentry, San Cisco, Tkay Maidza… It really humbled us.

S: I don’t think we realised at the time, but it has been such a springboard for us. People have started taking us more seriously, and it’s opened a lot of doors.

When you’re not touring or creating, what do you do in your spare time?

S: I think sometimes people are surprised that rapping doesn’t pay any bills… And that we need jobs.

E: In fact it actually makes the bills that we have to pay!

S: But when I do get a minute, I love ridiculous sci-fi books, live music and watching hedgehogs take baths on YouTube.

E: I like knitting. And dog-sitting. And mystery-shopping in Asian grocers.

What’s the next couple of months looking like for Coda Conduct?

S: Lots of gigs! We’re touring with Citizen Kay for his album launch

E: Which means we get to go heaps of places we’ve never gigged before; Adelaide, Perth, Hobart, Maroochydore, as well as plenty of our favourite venues.

S: And soon we’ll hopefully have some new music out!