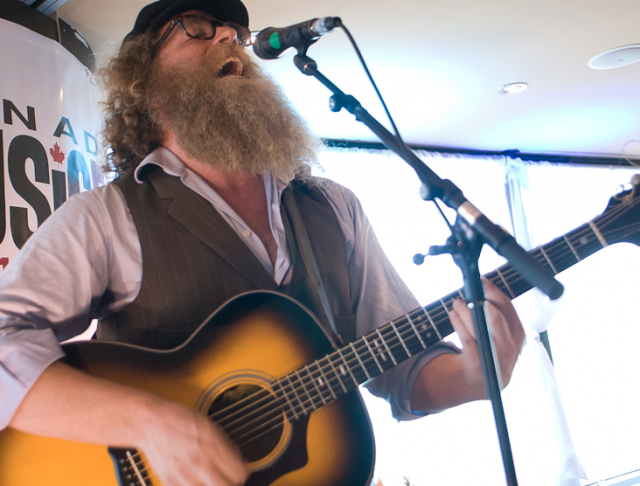 In the midst of preparing himself for a journey to Australia, Ben Caplan talked to Larry, about the upcoming tour, his plans for new music, and his devotion to his music.

Hello Ben! How and where are you?

I’m great, and right now I’m in Halifax, Nova Scotia. I’m having a bit of downtime before I get back out on the road.

It sounds like the last year has been especially busy for you.

Yeah, in 2012 I did a total of ten months on the road, but I’ve been home since November. It’s my first proper break since the beginning of the year — since January 2012.

Now, you’ve toured around the US, Europe, the UK… what were some of those experiences like?

Astounding, the response in the UK especially has been really, really positive. The first gigs I played there were late 2011, in dingy little bars with maybe fifteen people, and on my last tour I was playing to crowds of 800-1200 people. This time I was playing with a Norwegian group called Katzenjammer.

And you’re about to come down to Australia for the first time, which is exciting. But you’re probably not as excited about the flight.

The legendary flight to Australia! But I am looking forward to getting down there. It’s going to be a wonderful opportunity to get away from the Canadian cold, and visit some beaches.

For sure. You’re coming down for Bluesfest, and there’s quite an amazing line-up this time around. One thing about this festival is that it really is a place for people to discover new artists, as well as see their favourites. So it’s a great place for your Aussie debut.

Now, looking ahead, everything kicks off in February of this year. How do you stay sane when you’re touring?

Well, one of the things I’ve learned from spending such an insane amount of time on the road is to really treat it like a full time job. I’m not out partying every night, because I don’t want to rob the next night’s audience of the best show I can give them. And one of my goals as a performer is to constantly improve my game. ‘What can I learn from last night’s performance? How can I refine my craft?’ And that’s songwriting and interacting with the audience.

So I take care of myself. I try to eat well, I try to get lots of sleep… And the alcohol fills any gaps I have in my regiment, so it works out great.

Looking at the music, your album has been out for a little while now, so we’re all wondering what’s coming next. What are the plans for you over the next year, music-wise?

The last two months of being off the road have been really fruitful actually. They’ve helped me get back into the craft of writing, and refine some new ideas. The goal is to be back in the studio, and it’s looking like that’s going to go on schedule. I want to experiment with some new sounds, and hopefully have the new album out before the end of 2013.

I know we’d all love to hear that! Where are you looking to record? Is it the sort of thing you do at home, or would you go elsewhere for it?

All I know is that I’m going to do it in Canada. It’s still up in the air with what city I’m going to record in, because there are a couple of different options. I’d love to record in Halifax, but there are other interesting oppurtunities Montreal, or Toronto, or other major cities. So I’m trying to find the right collaborators, and select a producer from the shortlist I’ve got, and just work out who the right partners are going to be. Then I can make the record that I’m starting to hear in my head.

Are you performing any new tracks live? Is this tour going to involve testing out some new material?

Absolutely, yeah. In the last year, there’s been a few tunes that have wormed their way into my set, even though they aren’t on my last record. I might even try out one or two more on top of that. I’ll mostly play tunes from my record, since that’s the album I’ll be supporting, but there will be some new material here and there.

That does make it easier.

Yeah, the 17-hour flight complicates things a little! Besides, I get a kick out of having the audience to myself.

Australia and Canada have always been musical siblings, in terms of the way that we connect with music, so we’re always looking out for new, exciting, Canadian acts. Who are you listening to at the moment? Who’s big in the Canadian scene right now?

Charlotte Cornfield. She’s one of the best young Canadian songwriter’s around today. And I’ve always been a big fan of Geoff Berner, and Wax Mannequin.

I’ll have to check them out. You’ve got a pretty packed year, with lots of music to record, and there’s touring ahead. Is there going to be anymore time off for you, or are these next few weeks it?

I don’t even know if this is time off. Even when I’m not on the road, I’m practicing everyday, and writing everyday. But I’m going to be pretty busy. Most of the year is going to be either touring or cutting records. The blessing and the curse…

There must be a lot of jobs that feel like that!

Yeah! The first year and a half of touring is crazy because it’s like ‘wow, am I really in this town?’ but you have to make sure that after a few years, you can still say ‘this is exciting!’, so lucky it still is.

When you do travel, do you get to see much of the cities you go to? It seems to be a difficult thing to do — to try and be a “faux-tourist” as well.

Most places we go, I see the hotel, the stage, and the radio studio. But what I do experience, and what I do really cherish, is getting to meet the people. You really get the sense of being in a different place. Audiences are always really different, both when I’m playing the show, and after, when I’m just signing CDs. That’s what’s wonderful. Getting a sense of the local life.

Thankfully Bluesfest is a five-day festival, so you’ll have quite a bit of time to see people, either at the beginning when they’re totally sane, or at the end, when they’ve lost their minds.

I’m looking forward to both of those things!

Well, I wish you all the best with the next record, and maybe I’ll see you backstage at the festival.