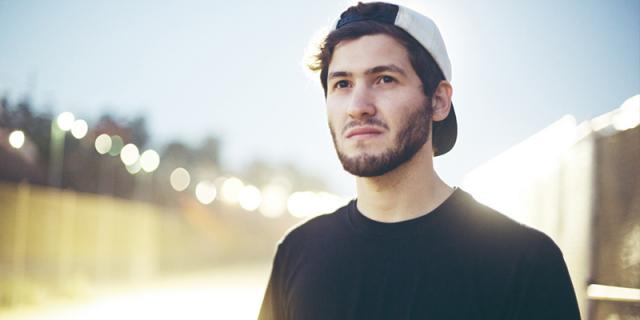 John Goodridge chats with Baauer about his upcoming trip to Australia for the Future Music Festival in March. He’s more than just the “Harlem Shake”, y’know…

Freezing! How is it over there?

We’re in the middle of a heat wave. We’re getting 40C for the next week.

Woah. Is it full on summer there?

Yeah full on. So hot.

Where are you at?

So I was gonna ask you about when you grew up, as you traveled around a lot.

What sort of influence did that have on you? Did it have an influence on your creativity?

Yeah, definitely. The most influence was growing up in England for a while and hearing like UK garage on the radio, like Craig David and shit. That was probably where I first listened to electronic music.

And you were quite young when you got into producing your own music?

Yeah well that’s pretty young. I was gonna ask about the song “Higher” with Just Blaze and Jay-Z. How did that come about?

We met through a mutual friend and agent and he suggested that we link up and we did. We went out for a few drinks and really got on and we decided to get into the studio; it was super manic and it literally happened in one night. We were playing some beats and took an idea from one of them and started building and by the end of the night, we put it on the internet.

For me that was one of my favorite songs from last year. It just resonates with me. I loved it.

Thank you very much.

So I was gonna ask how it worked? You did a bit then he did a bit or what?

I always like to work preferably with someone in the room with them. That’s always the best and that’s how it was with that. Sometimes you know when you have no other option you send something back and forth, mess with it and the more times you send it back and forth, usually the better it gets.

You’ve done an amazing amount of remixes with people like Flosstradamus, Nero and Disclosure. There must be a certain responsibility to taking a song and putting your own stamp on it? How do you feel about that?

What amazes me is that you tell that they’re both there. The original song, as well as your particular style and to me that’s the real talent.

Yeah that’s the ideal situation. Literally. The feel of the original and you can also hear the remix – yeah that’s the perfect combo.

I think it was the Flosstradamus track I was listening to last night and I could really tell the parts that you’d added in and they just blended in really well together.

Now the obvious question is the song “Harlem Shake.” Did you think it was going to be as big a success as it was when you were creating it?

No, not at all. You know, it was just another beat that I was just having fun making it and all that other stuff happened six months after it came out and was completely separate of me, you know. It was total shock.

And you never created your own video of it?

I mean, there are some funny videos out there – do you go online and see what people have done or do you turn your back on it a bit?

I mean, when it was all kinda happening, I was definitely watching them but nah, I don’t watch the videos any more.

And I was reading that you had a run-in with Azealia Banks as well.

So has that been resolved or do you think if you run into her again it will be fisty-cuffs?

I think it will be fine. It wasn’t even a run-in. I just briefly saw her for about five seconds. Does that count as a run-in? I’m not sure.

She’s pretty well known for her antics. She played a festival here in Australia and never showed up and walked off stage. I think that’s part of her persona.

Yeah, I heard about that.

You’re about to embark on a tour of the States before you hit Australia for the Future Music Festival. Which do you prefer – touring or recording?

These last couple of months have been the first time in a while I’ve been able to stay at home and work on music and it’s been really awesome. I really like it. But it’s a tough question. I love them both really. I’m so stoked to go to Australia. Traveling around is so much fun always.

So where do you get your samples from?

So do you have a specific sample in mind or do you just find them?

Yeah, I’ll just think about something, think about a sound or whatever and just Google it. Literally. And the first thing that pops up I usually get.

What will your fans see at the Future music show this year?

Well I’ve been based in the studio for the last couple of months, so I’ve been making new shit and I think this will be a perfect time to start playing it out. There will definitely be new shit, which I’m really excited about.

At least you’ll have some warm weather when you come.

Exactly. I can’t wait to get out of this freezing cold.

I’ve never been to New York but that’s my goal this year.

It’s amazing, but bring a jacket when you come.

Thanks for the chat and look forward to seeing you in Australia.