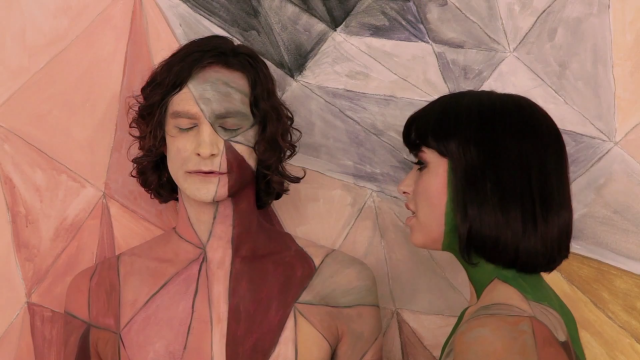 While at Austin City Limits, Larry talked to Gotye about his whirlwind year of touring, developing his live show, performing where The Beatles once played and much more…

Very well, so far. Haven’t seen a lot of it yet, but we’re in Dallas today, and we’re hoping we might get out and drive around… We’re doing one show with Kimbra, but we haven’t caught up with her yet. So when we do, we can all check out a bit of Dallas together.

You’ve been touring with predominantly Australian artists over here. It must be great to be in that position, to be able to share their talent with such a large audience, especially someone like Jonti.

It’s been fantastic. Jonti’s such a sweet dude, and such an amazingly talented young guy, so I’m really glad people have been coming down early to see him play.

And you played on David Letterman with Missy Higgins. What was that experience like, standing where The Beatles once stood?

The three minutes we played the song for were – I wouldn’t say “surreal”, but it was over so quickly, before I even knew what had happened. I ended up off-stage afterwards saying, ‘What… happened? What just happened?’ And we had an average performance too; probably the worst we’ve ever played that song in a long time. But that tends to happen on TV. We played a webcast that night, about forty-five minutes of music, but it sounded really good. I wish we could’ve taken the TV broadcast from the middle of the online set! I thought it was going to work, but it doesn’t always go that way.

It’s been so amazing to see you playing such big venues over here. What has the American touring experience over been like, compared to what you’re used to at home?

I’ve become used to touring internationally in the last eighteen months, and it’s been great. We’ve spent most of our time in Europe and America. We finished with an American tour in March and April this year, then we came home and developed the show, and got some new songs arranged with the band, and some new visuals, and tried to expand the production set-up. Then we came back to the United States, and we’ve spent two months here, after a short trip to Asia.

So in the past five-six months, I’ve mainly been spending time in America, and it’s easily been the best touring experience of my life. We’ve had an incredible amount of fun, the shows have been the best ever, and we’ve really worked out a way to schedule the routine of things to keep the stamina up… to feel healthy, to feel like singing.

It seems to go back to those shows you did for Graphic Festival a little over a year ago, where there was a lot of animation commissions. That seems to be where the current live show developed from.

Definitely. A bunch of animations that I premiered there are still very central to the show. And playing with a smaller band overseas, a five piece band, and being able to find ways to cover more stuff – more backing vocals… earlier on we had to put a lot more of the instruments on backing tracks because we thought we didn’t have the hands to cover it, but we’ve worked it out now, and we’re able to make it more live on stage.

We’re also a lot more comfortable on stage. With the shows we premiered at the Graphic Festival, everyone was very tentative and nervous, and unfamiliar with it, because although we’d rehearsed it for months, we hadn’t played it on stage before. And of course, I did the classic of working so hard in leading up to the first day of the tour, at the Opera House, that I got so sick I could hardly think.

So I was in pretty bad form, vocally and emotionally, because I was struggling to deliver this new material. But now, having done it for at least a year, all those things feel like a distant memory.

It’s been a long road since then! One thing that I’m sure everyone’s been commenting on is the compilation video you’ve put together. It’s like you’ve found a way to capture this moment in time when you have, basically, the biggest song in the world.

It’s nice that it comes across that way! Sometimes it just happens when you work with samples, and I love it when it does. Sometimes you try to engineer it, the material won’t let you do it, so I guess that six minutes allowed me to… to some extent, respond to what’s happened with the song, with all of the different emotions and tones I’ve had, seeing people covering it and parodying it, and what’s happened on the radio.

It’s got a couple of moments that I think are quite poignant and beautiful and restrained, and others that are more bombastic and hilarious and absurd. And a range of different things between. I love that it allows me to bring it back to the cut-and-paste stuff that I did earlier, on, to bring it back into that world; especially with video involved. I wanted to relish that.

Now – the Australian tour! You’re about to come back home for a massive, massive tour, your biggest yet! Are you looking forward to playing places like the Sydney Entertainment Centre or are you worried that they’re going to be too big?

I’m more looking forward to playing the outdoor venues, actually. It’s just tends to work better with sound, because there aren’t lots of walls and reflective surfaces for sound to bounce back from… We’re playing both Sydney Entertainment Centre and Adelaide Entertainment Centre in what they call “intimate mode”, so we’ll have a lot of curtains around, and barriers, and we won’t be trying to blast the sound out to 20, 000 people. It will be smaller than that, and I think that’s good because people will get a better sound experience for a stadium show.

Anyway, having done so many shows, our sound guy – Lachlan – is absolutely nailing the sound of a show. It’s really about the dynamic of transmitting the soul, which not a lot of sound guys can work so easily, because it’s a house mix. So I can’t wait to come back to Australia, because I’m so confident that they’re going to be the best shows I’ve ever played.

Well I’m looking forward to seeing you at Austin City Limits tomorrow. Are you going to hang around the festival and see a few of the bands that are playing?

I hope so! And we’re actually hanging out in Austin for a couple of days, so I’m looking forward to seeing the city itself for the first time.

Well congratulations again on all your successes, it’s been amazing to see from afar, and I wish you all the best for the rest of your tour. We’re looking forward to seeing you back in Australia!

For details about his December tour of Australia, click here: http://gotye.com/#shows.html