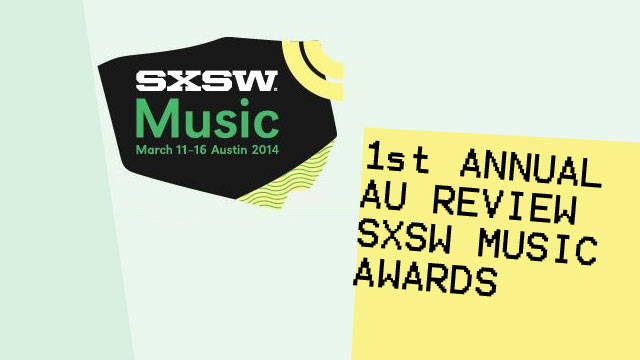 Having returned from our fifth SXSW a little over a week ago, we’ve spent some time reflecting on our experiences and now present to you the AU review SXSW Music Awards – acknowledging the bands who made the biggest impressions on us at the event. These awards were voted on by our team at the event: Larry Heath, Sosefina Fuamoli and Johnny Au! Read on: 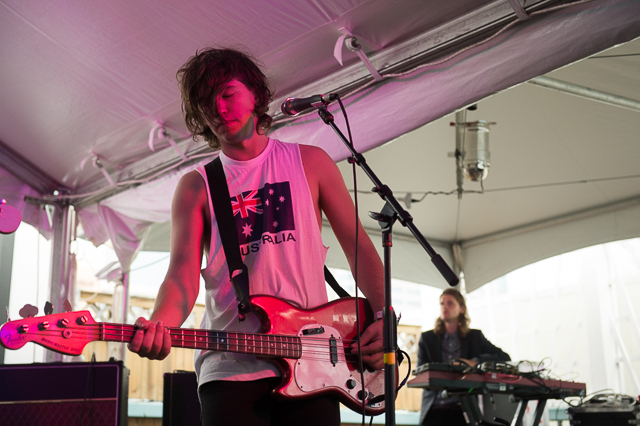 The Griswolds burst on to the party scene back home as a new party band to be taking notice of. Evidently, they harnessed that quintessentially Australian essence, took it over to Austin and completely dominated. In the wake of SXSW, the Sydneysiders have been making it into many ‘Best of’ lists and it’s honestly not surprising. A laddish charm, a great pop sensibility and some brilliant live tunes in the bag…of course they were going to be favourites with the Americans. Standing out from many of the bands I managed to see (and remember) over the period of the festival, The Griswolds are definitely a band who I would expect to smash it out of the ballpark as 2014 rolls on. Hold on to em tight, before the lure of the US tour circuit tempts them away completely!

Runner Up: The Preatures

RÜFÜS is a band who seems to be gaining decent momentum in most quarters, it seems. They’ve got a definite international flair about them in the same way The Presets and Cut Copy do and showed the impressive ability of whipping a small venue up in to a dancing heap of bodies. Many of the people I spoke to while in Austin were surprised to hear they were Australians, but then went on to note that it was unsurprising, given the names our nation has been producing over the past 12 months. Need I say more?

Runners Up: The Kite String Tangle 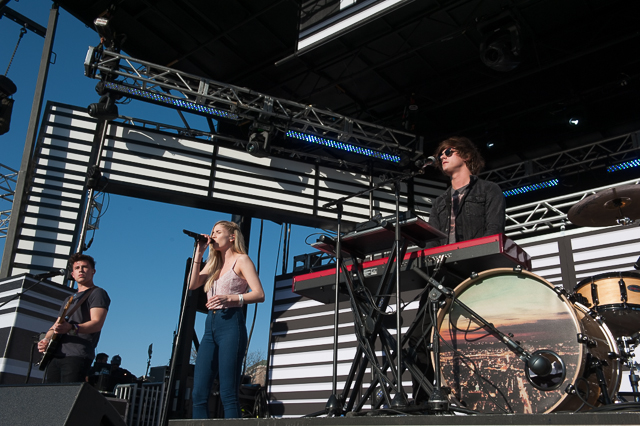 Seeing London Grammar at Stubb’s was my first time seeing them ever. It was an introductory kinda show as they’re still establishing themselves Stateside, but I knew how big they stand to big, just remembering back to their recent Australian trip. Being able to fill and hold the attention of a capacity venue such as Stubb’s BBQ is impressive in itself, but with the type of music London Grammar make, it’s even more so. Hannah’s vocals were dreamy yet commanding and she was on form the entire way through.

Runners Up: Band of Skulls 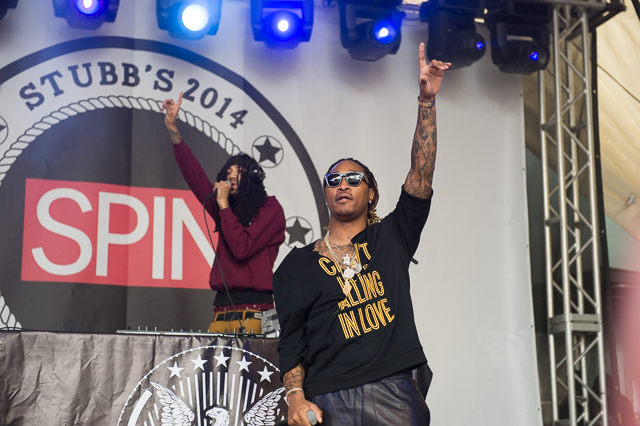 I’m only still relatively new to Future, having heard bits and pieces of his work over the past six or so months. Still, being able to pick up where a rock band like Against Me! left off at the SPIN day party was pretty awesome to watch – a complete contrast of music and indeed live crowd environment. People went from moshing to grinding in one fell swoop and it was an entertaining set. As a performer, Future is pretty fun. Hyping up his forthcoming album was clearly the name of the game, but as a writer and producer, the dude has clear talent. 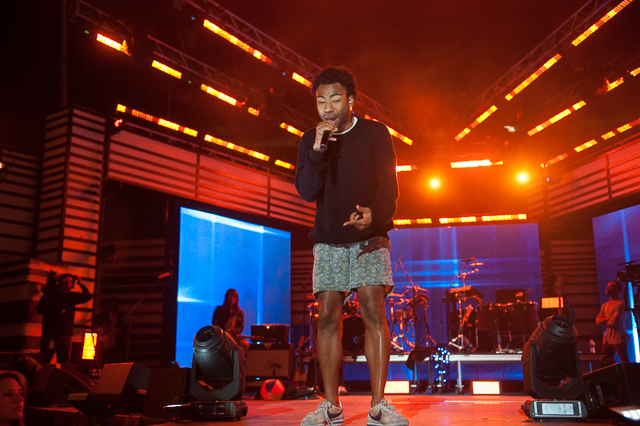 I think Donald Glover is quite enigmatic to a lot of people. As Childish Gambino, he’s this hip-hop force that has come out of nowhere seemingly, especially with because the internet – world’s away from his acting and writing credits. There’s a lot going on in his head creatively and the passion and aggression behind it is channelled brilliantly through his live shows. With a great band behind him and skill of rhyming that is definitely impressive, Childish Gambino was hands down one of the best artists I saw at SXSW overall. Shifting effortlessly between some hard and graphic freestyles and velvety R&B vocals, he had the crowd entranced and in the palm of his hand.

Making an 11 piece sound good in an environment where you have 20-25 minutes to set up (if you’re lucky) is a difficult task, and none did it better than Portland group Typhoon. I caught them at the Central Presbyterian Church (read the review HERE) and was blown away by the performance. The acoustics didn’t turn things, either…

Most Original: Until The Ribbon Breaks

There was something about this UK group that made them stand above the rest… here’s a quote from my review of the band at their show at Mohawk’s: “With drums, keys and samples, they had an interesting blend of electronic and live elements throughout the set. They moved between high energy and atmospheric tracks with ease, with seemingly different vocal effects on every track, just to keep things interesting! I swear they even had a Gotye sample floating around in one of the early numbers, too.”. Also see what Sose had to say about the group HERE.

The Buzz Award: St. Paul and the Broken Bones

The buzz award goes to the band who you mightn’t have heard of before you came to SXSW, but by the time you left, you and everyone else who managed to catch the band couldn’t stop talking about them. These guys are new to the scene, bringing their distinctive take on Soul to audiences in a way that’s being very well received, thanks in part to a charismatic front man in Paul Janeway. If you managed to see them, you didn’t stop talking about them. They were just that good. And you don’t get buzzier than that… You can read more about their performance at Spotify House HERE. 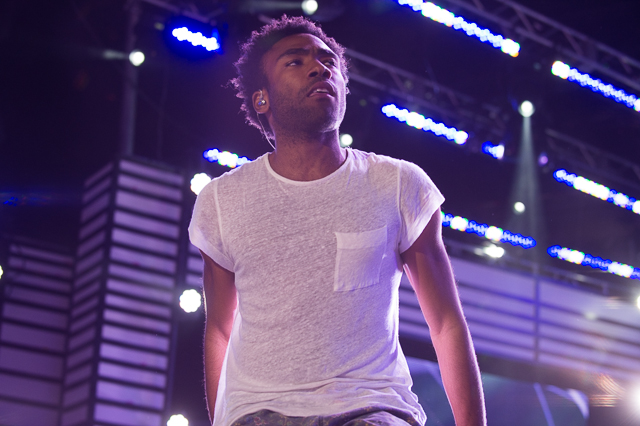 So good, we might make a GIF out of it. 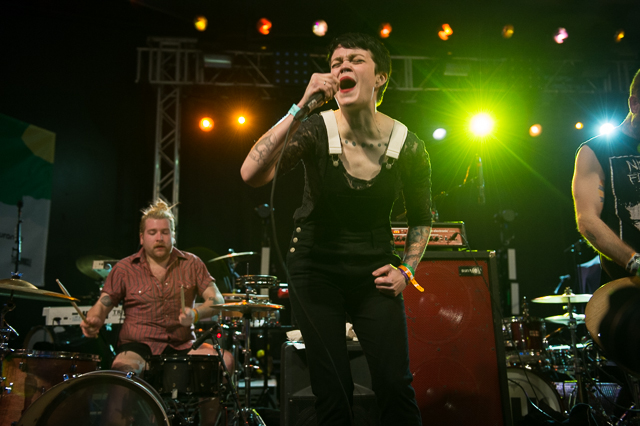 We were more than happy to have our ear drums blown out by this great punk rock group out of Syracuse, New York. Meredith Graves screams her way into our hearts… that’s one way you can put it, that’s for sure. 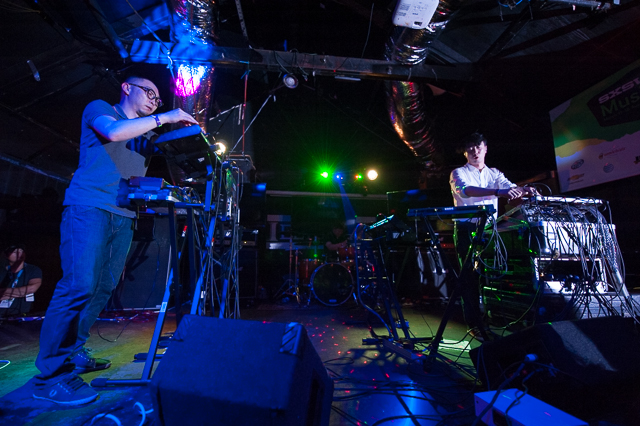 Former X Japan drummer and frontman Yoshiki played a very unique showcase at the Flaunt Magazine private party at Qui Restaurant at SXSW. Yoshiki played a piano duet with a hologram of himself. The result was visually and aurally spectacular for the specially invited guests.

Waiting for this interview to happen, I was nervous. I mean, it’s Travis Barker, one of the best drummers I’ve ever heard. He looked really intense and introverted; watching him take part in a photo shoot outside the hotel the interview was taking place at, he looked a bit lone wolf-ish. However, when I was introduced to him and we sat down to have our chat, I realised how laid-back and lovely he is. There was no pretension about him at all and I forgot we were actually being filmed.

I’m a big fan of Keith Morris, a man who has fronted iconic groups like Black Flag and Circle Jerks, and so it was a pleasure to interview him. But the result was one of the loosest interviews I’ve ever done at the festival, which somehow became a conversation about rocking out to monkeys at a Zoo? It’s truly wonderful, you should check it out. Part one is above. 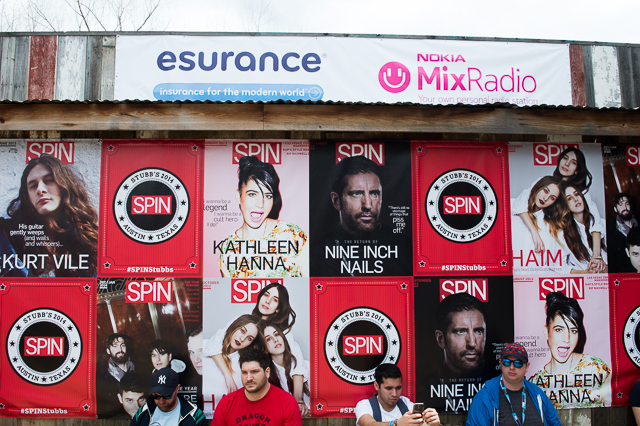 You had us at free drinks and breakfast tacos! Like any SXSW party, these are a must… but the SPIN party lineup soared above the rest, making it one of the best events of the week – as it does every year. This year, ScHoolboy Q, Against Me!, Cloud Nothings, Future, Temples, Warpaint, The Orwells, Radkey and more graced the two stages at Stubb’s. Not bad at all. 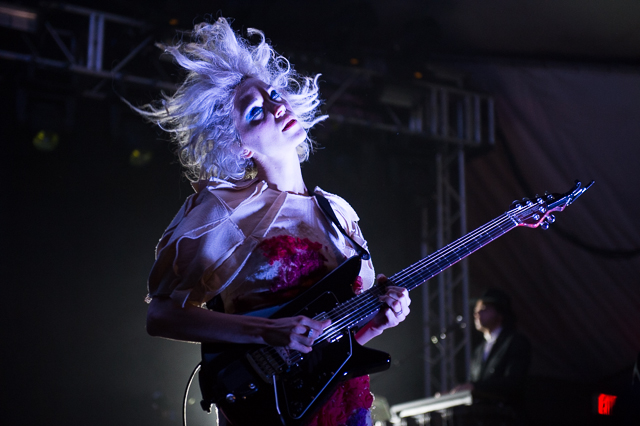 Taking place at Stubb’s, the NPR Showcase on the Wednesday night always holds an impressive lineup. This year was no exception, with St Vincent attracting the most attention, and Damon Albarn closing the night – albeit with a disappointingly reduced set due to 2am curfew. Buzz bands Eagulls and Perfect Pussy impressed and Kelis worked hard to promote her new record Food. You can read the full review HERE. You can also find photos HERE.

Though the lines made it a difficult place to get into, with free drinks and amazing music running through the week, it was no surprise why it was such a hot venue. Highlights for the week included Blondie’s Debbie Harry surprising guests with a performance with the Dum Dum Girls, a packed out appearance by Real Estate and up-and-coming bands like St Paul and the Broken Bones making their mark…

Always our favourite place to hang out and see bands – plus eat some delicious beef brisket tacos! The outdoor ampitheatre is home to the week’s biggest shows, but remains intimate enough to make them special experiences all the same. It’s of course where Gaga played this year, where St Vincent made her mark and where buzz bands like Perfect Pussy shit their pants. And don’t get us started on the Gospel BBQ Brunch on the Sunday….

One of our own team included, a stuff up with allocation meant that almost half of those allocated passes to the event weren’t able to get into the show. Adding insult to injury, this was apparently due to Jay-Z and Kanye having one of the biggest guest lists the world has ever seen. Disappointing for fans who could have had many other places to be, but instead waited in line with guaranteed entry that never eventuated. We’re sure Samsung will learn a thing or two from that experience…

Runner Up: No secret OutKast performance…