With weekend of films and special events that included appearances from the likes of Boyz II Men, Santigold, Bishop Briggs and more, into a week of official showcases that included everyone from Joan Jett to Shakey Graves and Andrew Bird, SXSW 2019 was as jam packed as ever. So what were our favourite musical moments of the week? Read on to find out.

One of our favourite venues every year at SXSW is Vevo House, and this year was no exception. It all kicked off on the Sunday night with an appearance from Nelly, who proceeded to push through a 30 or so minute set that was essentially a greatest hits medley. It was also the sort of trip down memory lane that is only amplified by free margaritas and that moment where you go “I haven’t heard this song in 15 years, I’m not sure I liked it then, but I’m loving it now.” And after all, isn’t that what life’s all about?

9. Santigold at the Booksmart Launch Party

And you may be wondering what that photo in the header is. That’s Santigold after she invited a bunch of the crowd up on stage at the premiere of Olivia Wilde’s new film Booksmart – in which she marks her Directorial debut. And yes, that’s Wilde up on stage on what was also her birthday. Honestly, it wasn’t the best set from Santigold – the vibe of those film events doesn’t always lend to huge audience interaction – but that on stage party at the end was truly a memorable moment and the end of a great night. Word is the movie is fantastic, too.

With incredible vocals and instrumentation, I caught Irish artist Joshua Burnside on a boat in acoustic mode accompanied by a trumpet and some shakers. Only playing two songs, in his second time in SXSW, and ahead of a North American tour later this year, he blew me away – leaving me with goosebumps long after I left the event. Highly recommend checking this artist out.

Every year, the festival puts on a free, outdoor stage, aimed mainly at the locals, to give them a great show and something of a respite from SXSW madness. In past years, acts like The Strokes have turned the stage into a shitshow (an amazing one, though). But this year, the festival’s closing night saw the likes of Patty Griffin and Andrew Bird take to the stage, and attract a sizable but comfortable, family friendly crowd (they even had a Dumbo activation!). And it was Bird’s set that left the lasting impressive. Tracks like “Bloodless” and “Sisyphus” off his brand new album My Finest Work Yet proves that the record may be worthy of its name. And favourites like “Pulaski at Night” were as strong as ever. But it was “Three White Horses” that absolutely floored me. A three and a half minute track off of Hands of Glory that I honestly had never gotten into, was turned into an EPIC musical odyssey which was one of the best live tracks I’ve ever heard. That track may have just been the moment of the entire festival. 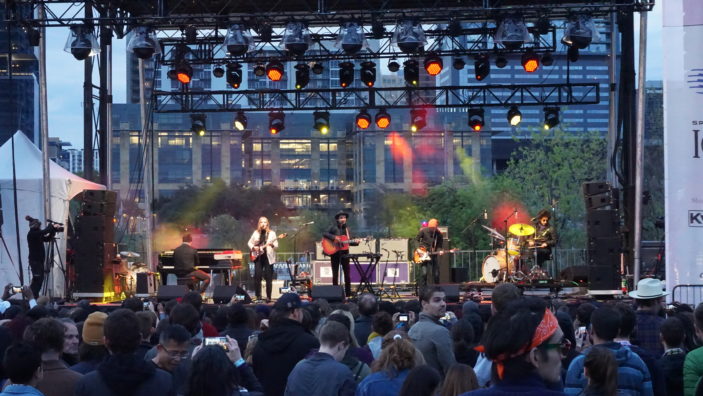 6. Sam Fender lives up to the hype.

UK buzz act Sam Fender lived up to the hype with a spectacular set (his final of SXSW at the Secret Sounds party) with an accompanying quartet, showcasing excellent vocals and phenomenal musicianship on the guitar as he ran through tracks off the Dead Boys EP, and his new single “Hypersonic Missles” off his forthcoming debut album, off which he also played as yet some unreleased material (including a track which brings up Brexit, among other issues!). And with the album due in the US Summer, and playing the Secret Sounds Party, odds are that he’ll be in Oz for Splendour. So get excited! 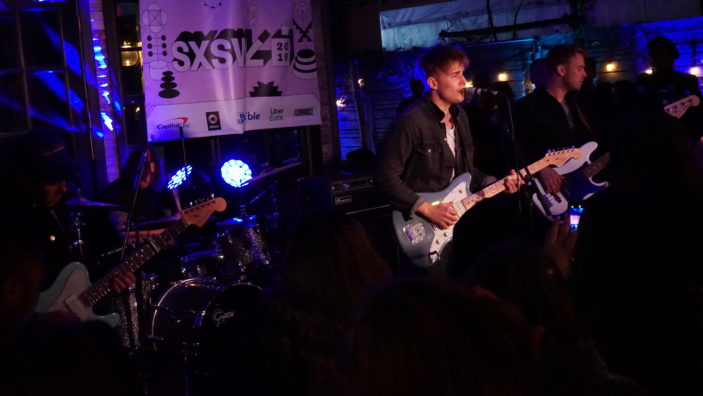 Wherever Angie McMahon went, an impressive crowd followed, singing along to just about every song. Honestly, catching her briefly (and having been following her career for a while now), it’s no surprise she ended up winning the Brent Grulke Prize winner for Developing Non-U.S. Act, and was added on bills like the Rachael Ray Feedback Party alongside Big Boi, and “Reunion” alongside Willy Nelson. She was THE buzz act from Australia this year, and she and her two piece did not disappoint. This is the next artist set to dominate the stages of the world – she’s doing it already!

4. Bishop Briggs and St. Paul and the Broken Bones at the Capital One House

They were over two separate nights, but we couldn’t decide on our favourite Capital One House performance – which ran over the interactive portion of the festival – so we decided to tie them. Bishop Briggs was powerful and spellbinding on the opening night, while St. Paul and the Broken Bones won a legion of new fans (in a spectacular suit no less), with their spectacular performance on Sunday night.

3. Joan Jett and the Blackhearts at the Media Temple Interactive Closing Party

This was a really special one. The legendary Joan Jett and the Blackhearts closed out the Interactive portion of the festival with the annual Media Temple Closing Party that in past years has seen everyone from TV on the Radio to the Foo Fighters perform. This year, Joan and her band pushed through classics from their own catalogue (see “Bad Reputation”) and The Runaways (“Cherry Bomb” coming second in the set and whipping the crowd into a frenzy). It was my first time seeing Joan play her own music, and it was a really, really, really special experience. And it was only amplified by being in one of the best venues in Austin, Stubb’s.

2. Cautious Clay playing all the instruments (some 13 times!)

With a plethora of shows lined up for this week (I’m told some 13 by week’s end), I caught buzz artist Cautious Clay early in the week at the Vevo house. The man can play just about every instrument it seems – jumping between flute, saxophone, guitar and vocals – and was unsurprisingly one of the most talked about acts at the festival. I caught him a second time at the Rachael Ray Feedback party on the Saturday night, and was disappointed to see Big Boi and his crew start their set early, which forced Cautious off stage early. Poor form!

It was my first night at SXSW 2019, and really nothing topped it – Boyz II Men coming out after the premiere of the new movie Long Shot to play two tracks in front of a jam packed Paramount Theatre, as they threw roses into the crowd and sent the room into a frenzy. While Charlize Theron and Seth Rogen danced side of stage, of course. It was the briefest performance all week, but them crash landing into the theatre and surprising the audience is what SXSW is all about. 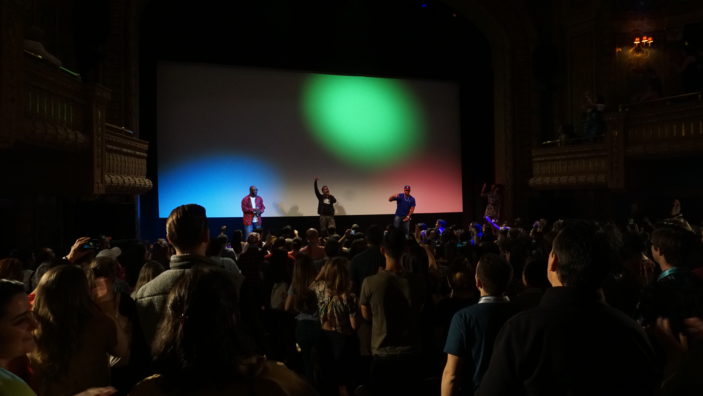 Of course it’s impossible to stop there. Irish act Roe is a thrilling songwriter who just keeps getting better. Avalanche Party were one of the most electrifying bands I caught all week, with huge Punk energy that made them a force to be reckoned with. Everyone was talking about Black Midi – though I didn’t get to catch them myself. But the UK outfit were absolutely one of the buzz acts. Dan Deacon was an absolute blast as always at the Good Omens x Buzzfeed party (which was in “The Garden of Earthly Delights”, one of the best activations of the week). 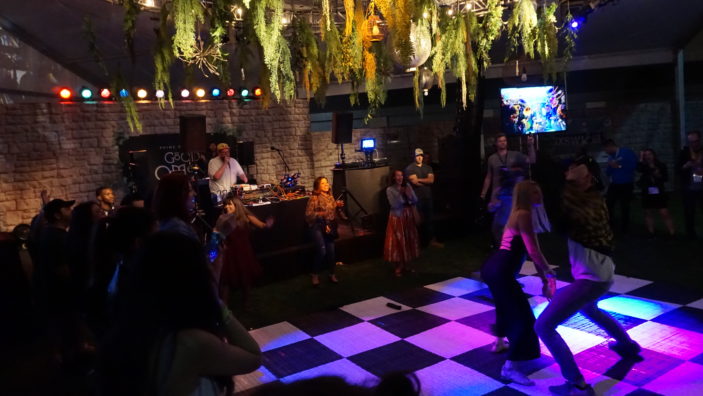 As must as Big Boi and his crew were dicks for playing over Cautious Clay, he was nonetheless a highlight of the week with his Outkast live tracks and guest appearance from Sleepy Brown, for their new project “The Big Sleepover”. Then there was Charlotte OC, whose new tracks and overall energy make her an unstoppable force of nature, not to be missed. There was also Welsh outfit Boy Azooga, who continue to prove themselves to be one of the most exciting acts in the world right now

I’m bias but the acts who played our party on the Thursday night were amazing too – I was blown away in particular by the Japanese group DYGL who closed the night. But Korean act Drinking Boys and Girls Choir, and Japanese group Stereogirl were amazing too. So were the Aussies, of course, but I already knew that. Geowulf, I Know Leopard and San Mei all delivered powerful, amazing sets.