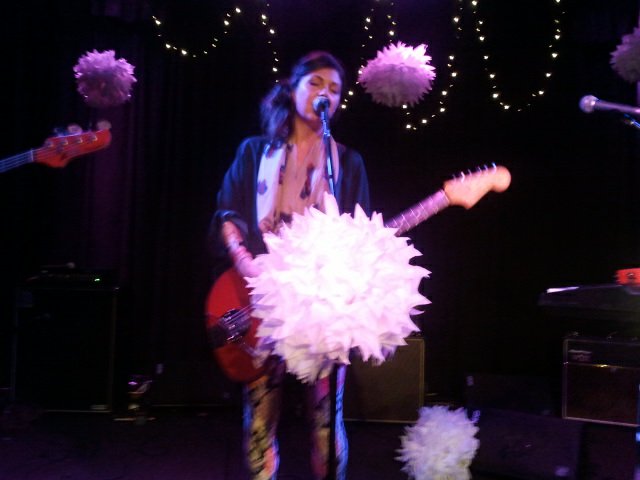 Locals New War had the difficult task of warming the stage for the latest hipster buzz band to explode across the blogosphere Teeth & Tongue. They were slow to warm up with their first track being a dull, long drone of monotonous bass and sketchy vocals that seemed to suffer from some bad sound mixing. As the set progressed and the players loosened up, their sound blossomed from unstructured echoing noise to a more melodious rhythmic, trance inducing blend of bass and synth, that sadly only came into it’s own with their last track “Reveal”.

New War had a confusing live presence, their front man was lacking in energy which made their show less engaging than the music should have been. The other band members looked to be falling asleep onstage, with the exception of their drummer who was giving the performance his all.

The music itself showed a lot of promise, but the live renditions of their songs were not captivating, severely lacking in the intense atmospherics that makes the style of music New War play such a pleasure to experience live. It was an interesting effort that hopefully will improve with the passing of time.

Jess Corneilus is the song writing powerhouse behind Teeth & Tongue and the band have been gathering a lot of momentum with the recent release of their second LP Tambourine. The sold out crowd eagerly awaited her presence on stage and fortunately the young chanteuse didn’t disappoint with an engaging set that was relaxed and fun.

Cornelius’s vocals are the definite feature of Teeth & Tongue’s sound and her sultry tones were a delight to experience. The band powered through a tight set that did include all but one tune off the new record, highlights of which were dreamy renditions of “Unfamiliar Skirts”, “Sad Sun”, “Love As A Word” and “Vaseline On The Lens”.

As a performer, Cornelius’s presence is subtle and somewhat understated. She doesn’t have the immediate captivating force of artists such as Sarah Blasko or PJ Harvey, but there is a sincerity in her tone that made it difficult to turn away during her set. The only down side of the evening was her apparent nerves that saw the set take off rather slowly and her seeming unwillingness to deviate from the recorded work and really unleash with her vocal range. Her delivery was reserved and safe and it would have been nice to see her test the limits of her obvious talent in a live setting.

While Teeth & Tongue definitely aren’t a lively bunch, the music speaks for itself and asides from the lack of live improv, they played a solid set that had the crowd begging for more as they closed the night with an old fan favourite “There Is A Lightness To My Bones”, with the band receiving a rapturous round of applause as they walked off stage.