Though the big annual jam by The Roots and friends (with rumours of SWV, DMC, Dermot Kennedy, Nathaniel Rateliff, Jessie Reyez and Rapsody being the unannounced guests) was cancelled due to a credible bomb threat, the final night of SXSW left no music lover wanting for more.

Those scoping out the remainder of SXSW Film Festival got to dip into the immersive world of forthcoming Netflix hip hop documentary Rapture, with T.I, Dave East and Rapsody amongst acts in attendance on the red carpet, all whom would go on to celebrate the series with a huge concert at Stubb’s later that night.

The Film Festival meanwhile closed officially with the premiere of Isle of Dogs, with Director Wes Anderson and stars Bill Murray, Jeff Goldblum and Bob Balaban among the guests to walk the red carpet and appear in a half an hour Q&A following the film. Murray was earlier spotted on 6th Street in front of the iconic Driskill Hotel, reading out a poem about dogs. You can watch that here:

#BillMurray reading a poem about a dog is something you never knew you needed…until now. @isleofdogsmovie #SXSW pic.twitter.com/z7GkTsy4rG

Antone’s was taken over by the legacy of Miles Davis as a house dedicated to the legendary musician brought in plenty of performers across rock, roots, R&B and soul. Singer Deva Mahal topped the six hour party, rounding her set with gentle, soulful songs including an emotive cover of Robyn’s “Dancing on my Own”.

Quantum Collective capped off the final day of their big Southwest Invasion festival atop the Whole Foods Market with a special set from DMC (of Run DMC, pictured below) who had a lot to say about the new generation of hip hop fans implying that veterans are “washed up” before ending his hard rock meets rap set with classics “It’s Tricky” and “Walk This Way”. 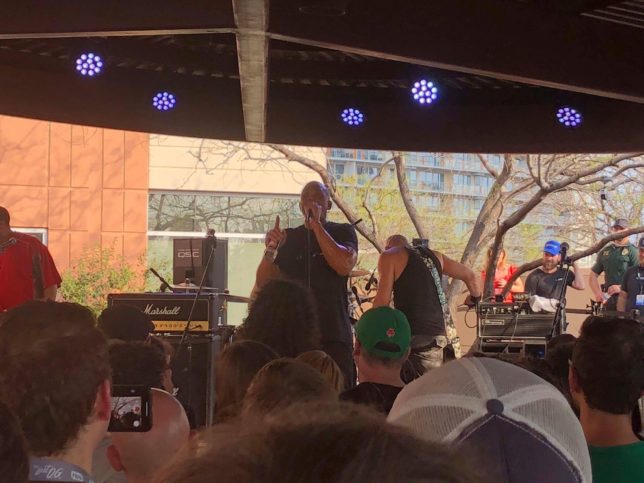 Stubb’s was overtaken by Mass Appeal and Netflix for a huge send-off concert to promote Rapture, bringing in a who’s who of hip hop including host Statik Selektah and super-producer Just Blaze, the latter whom surprised the crowd with the legendary Beanie Sigel. Dallas rapper Bobby Sessions, Def Jam’s newest signee took full advantage of the situation with the night’s best showcase set from an upcoming rapper. As did G.O.O.D music trap-trapper, Chicago artist Valee and Houston rapper Maxo Kream. Rapture stars Rapsody, Dave East, and T.I (accompanied by signees 5Mics and Tokyo Jetz closed the night with consecutive sets, ending with the King of the South’s energetic string of hits that included “Live Ya Life”, “Bring ‘Em Out”, “Whatever You Like”, “About the Money”, and “What You Know”, as well as anthems “Stand Up” and “U Don’t Know Me”.

Earlier in the day at Stubb’s, Rachael Ray held her annual “Feedback” concert, with the party continuing over at Feedback House after the show came to an end, wrapping up three days of festivities there. The Feedback party included performances from The Strokes’ Albert Hammond Jr. fresh from releasing his brand new album Francis Trouble, Girl Talk, Kurt Vile, Waxahatchee, Kevin Morby, Hinds and Salt-n-Pepa, who delivered hits including “Let’s Talk About Sex” to a capacity crowd. But it was supergroup Dr. Pepper’s Jaded Hearts Club Band who closed out the night, which featured artists like Jet’s Nic Cester, Miles Kane (who celebrated his birthday on stage) and Muse’s Matt Bellamy performing Beatles classics. Included amongst the set were many of the rockier Beatles numbers, like “Helter Skelter”, “Back in the USSR” and “Hey Bulldog”.

Elsewhere around the city, Aussies continued to make their mark as they closed out their run of shows at the festival. Gang of Youths (pictured in headline image) played a thrilling final (yet brief) set at Cheer Up Charlie’s, as did Bad Pony, who brought their debut SXSW performances to a close at midnight on Rainey Street. Elsewhere you might have found your way into a solo Frank Turner concert, or a secret gig at Willie Nelson’s studio, and sure enough the festival went out with a bang in its 31st year…

Stay tuned from more from the AU as we continue to delve into the week that was at SXSW, with artist discoveries, interviews and more.