SXSW Interview: Fatai chats about life in Chicago, the role music plays in her day to day, and more! 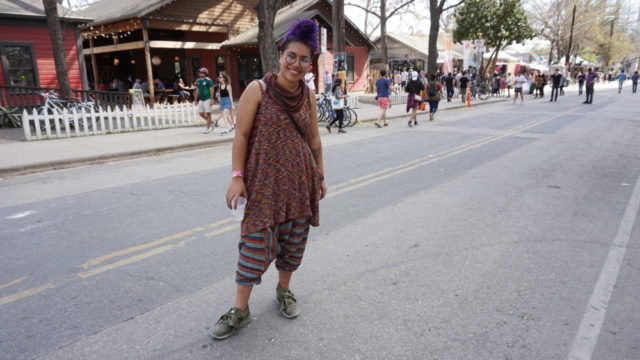 Talented singer and songwriter Fatai has been calling Chicago home for some time now, but the Melbourne-born artist has maintained strong links with home, even from the other side of the globe. A newcomer to the SXSW fold, Fatai caught up with Larry recently to touch base and share her experiences in the States.

What are the experiences been like so far? Has it lived up to kind of the expectations of madness that I’m sure everyone had told you to expect?

Yeah, do you know what? I came here with no expectations because I’ve never heard of SXSW ever. Before SXSW, I lived under a rock by myself in my own little world. I feel like I’m just being opened up to a whole new world of sounds, vibes, people of all colour of all different walks of life. Just great to be around Aussies again too. It’s been a while, because I live in Chicago now.

This is kind of kicking off the Blank Canvas tour, for you which is kind of the sequel to the Live in the Moment tour.  What an extraordinary run of shows you did at the end of last year, selling out shows all over America.

Tell me a little bit about that experience then because that was your first kind of proper tour of the country wasn’t it?

It was mind blowing. Sort of surpassed every expectation I had for myself. That’s exactly it, it’s a sequel and it’s like this beautiful love story with America that I’m like writing. It’s just like another level of memories and experiences and stuff. [The] Live in the Moment tour was nothing short of amazing and it makes me more excited about like going on this Blank Canvas tour. I’m ready.

What does a Blank Canvas mean to you?

Honestly, I didn’t have much meaning when I came up with it. Now, with a lot of shit happening in my own personal life, I just feel like Blank Canvas is pretty self explanatory. It’s like there’s always new beginnings, there’s always a new chance. Every day is a new chance to paint something beautiful with your life. And also just like the start of my own journey and just excited to paint a picture of my life with the people I encounter, the relationships I have, the music I create. I feel like my life is literally working out a story for people to look at, admire, as if they were to walk into a gallery and look at a painting and stuff. I hoping to like paint a good picture with my life through music.

Having seen you this week and seen you in the past back in Australia, you know that really has seemed to be always your approach to the life. It’s really letting someone in on your life and your feelings and your opinions and your experiences.

Yeah, it’s scary. It’s like someone’s cutting right down the middle of you. Like cutting you open and like opening your rib cage and everyone just seeing your insides. You’re laying it on the table bare.

That’s why I’m so exhausted. Because it’s not, you’re not performing, you’re literally giving your heart. Vulnerability is something that I feel like we are yet to master well even in this time as well in our generation. Just trying to embrace all that I am, good and bad, and share it with people unashamedly and effortlessly.

It seems like just from some of your posts online as well like that’s also a struggle in the first instance, creating a song as well. Putting pen to paper or finger to phone or whatever it might be and actually creating the music and writing the music and getting those feelings out which is such a deeply personal process.

I always thought writing was sitting down with a pen and paper and supposedly forcing the space.

I’ve realised that writing is literally living, like every moment is a song. Every sound is a song. For those who don’t know, I actually don’t listen to music. Super corny, but the sounds of life is my music. I draw inspiration from like people’s experiences, just human things that we can relate to and what not.

You grew up with music though, didn’t you?

Yeah. Different kinds. Music from the islands where my parents are from. I’m Tongan. That’s my ethnicity, born and raised in Melbourne, Australia, first generation. I grew up around Gospel music in the church and then also just cultural traditional music which is … I didn’t really appreciate until I was older.

It’s the type of music that I grow up with. I mean I would have honestly preferred to be outside playing in the dirt. That was me as a kid. Outdoors, all of that but fell in love with music eventually.

Are you still an outdoorsy person?

Yeah, right now, this moment, in the sun. The Texas sun is phenomenal. I think that’s one of the things I love about festivals. Just bringing the outdoors in and the indoors out and sort of that merge. Nature speaks to me like nothing else.

And Chicago, what pulled you there?

It’s a great city, I don’t blame you.

I’m slowly falling in love with the city but a church reached out to me and asked me to hang out and sing with them so I’m a contracted vocalist at a church in the suburbs of Illinois. That’s the opportunity that got me out there and now I’ve made it my home base to have a go with my music in the States.

Do you go out to like Buddy Guy’s bar and listen to some blues?

Chicago, the musicians in that city are incredible.

They’re freaks. I don’t listen to music like in the car. I don’t have music on my phone. But I appreciate music so much. I think, yeah, I would rather listen to it live than anything. The physical experience I love more.

I understand that idea too, especially if you’re creating music, you don’t want to be influenced by other pieces of music as well.

Oh, of course, and that’s where creativity comes from by constantly changing your approach and looking at the world differently.

Looking ahead you’ve obviously got the Blank Canvas tour happening now for the next month or two. What’s next for you? Are you, I’m imagining we’re going to get some new music this year?

We’ve been hearing some new songs as part of the sets.

New music is priority for sure. It’s taken such a long time to get it done but I think it’s just my transition from being signed to a label and really into independency.

I’ve given myself grace to like take my time with it but this year I want to get music out. I go back home and I’ll be doing some touring. I can’t say what yet, but keep an eye out on my social media and I’ll announce some [news] and touring.