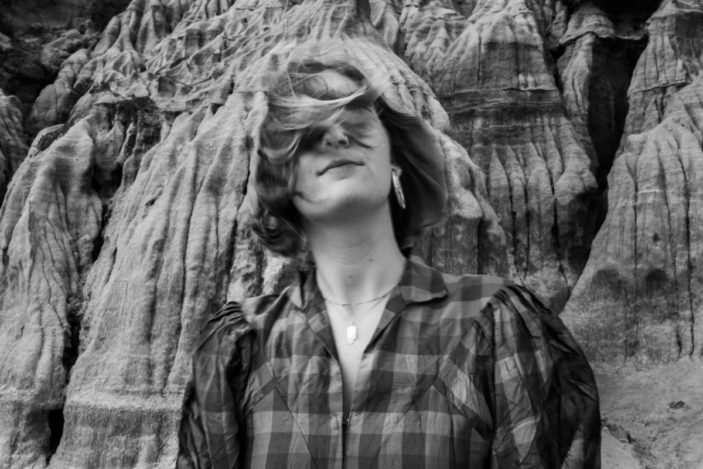 The latest offering – released 12 January – is a story about dementia and an endearing tribute to her grandfather who passed away from the disease last year. “Anthony” was written immediately after seeing The Father, starring Anthony Hopkins, which inspired the haunting lyrics. Romanie’s dreamy vocals pair with jangly guitar as vibrant pads and airy harmonies decorate the background, opening with the clever lyric “I wake up sleeping in my head.”

“I remember coming home from the cinema late at night and getting this wave of inspiration,” Romanie explains. “I sat down with my guitar and wrote the song almost completely in one go. We were still in and out of lockdowns and I was chatting on Zoom with my friends from overseas Michiel and Kate who encouraged me to finish the song. The first band rehearsal back, we played Anthony through and it felt like magic to make this song into something bigger with my band, so much fun.”

Romanie has been cutting her teeth in the live scene recently, having headlined shows at Abbotsford Convent, The Cactus Room and Penny’s Bandroom as well as a string of support slots. She has also received airplay on triple j, JOYFM and 4ZZZ, and claimed an AIR feature artist accolade.

If Romanie has managed to dodge your radar until now, here are five things that you may not have known about her.

My beautiful Belgian accent is fake. I’m just pretending to be Belgian and am born and bred Aussie bogan. I just happened to spend most of my life in Belgium and have two Belgian parents. Who said the facts needed to be true?

Although I’m obsessed with movies, I wouldn’t actively seek out a comedy (but don’t mind watching them when I’m roped into it). My preference and endless Netflix quest goes out to existential dark movies and coming of age dramas. No laughing involved.

The past few years I’ve gotten into the habit of trying to write a song every week. It’s made me develop my songwriting muscle a lot and helps me process what’s going on in my day to day life. I also feel like it’s helping to be more present in life and to look out for things to write about.

I grew up as a scout (in Belgium it’s called ‘Chiro’). Every Sunday we would gather with a group of friends and play silly games and roll around in the mud (literally). During the summer we would go away for a week and sit around campfires – it’s the first place where I picked up a guitar and developed my love for music.

During a very impromptu dinner party with my friend, she pulled out tattoo needles and ink – we decided to tattoo something onto ourselves and that’s how I ended up with a very badly drawn vibrato Behringer pedal. Behringer, if you’re reading this – let’s talk about a potential sponsorship for UV300’s.