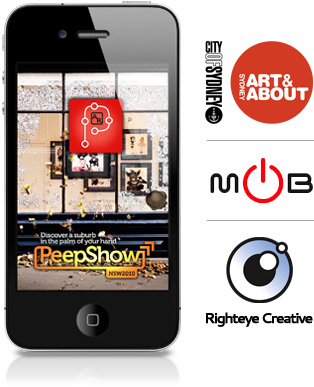 Launching at Heffron Hall on the weekend of 15-16 October as part of Art & About Sydney 2011 is PeepShow AR, a smartphone app which will use augmented reality (AR) technology to celebrate the creative spaces and industries within the 2010 postcode.

Straight from the palm of your hand, PeepShow AR will offer unique curated tours of Surry Hills and Darlinghurst, which have been designed in consultation with key creatives who live, work and/or play within the 2010 postcode.

Optimised for iPhone 3Gs and Android devices, tourists and Sydneysiders alike are invited to choose from tours created by designers, architects, artists and more, with the main aim of celebrating the unique artistic spaces, places and peculiarities of these City of Sydney suburbs.

At the launch weekend (Saturday 15 October & Sunday 16 October 2011), the public will be given the chance to download the app on site at Heffron Hall and embark on FREE hourly tours with their virtual guide. An interactive treasure hunt will guide visitors through the 200+ participating sites, with special events to be announced closer to the date.

Made possible by funding from the City of Sydney, PeepShow AR is a collaboration between Queen Street Studio, MOB Labs and Righteye Creative. PeepShow AR is an associated event of Art & About Sydney 2011, produced by City of Sydney. PeepShow first came about in 2008 as a community profiling initiative for the Chippendale area.