Like most in the music industry, the past seven months since COVID-19 hit has heavily impacted DJ Tom Lowndes, aka Hot Dub Time Machine or DJ Tom Loud. But this weekend he’ll finally return to the live scene with two shows in Perth.

Tom is currently quarantining in an Airbnb house in Perth’s outer suburbs, as is the WA Government regulations to complete two-week mandatory quarantine having received a special exemption to enter the state, along with several other eastern states artists including Young Franco, Owl Eyes and Bag Raiders who’ll perform at Saturday’s Wine Machine festival in the Swan Valley.

Sadly the two other Wine Machine legs scheduled for Canberra and the Yarra Valley had to be postponed to March given restrictions within those regions, but Hot Dub is making the most of his time west, adding a headline sideshow at HBF Stadium in Perth on Friday night too.

Since launching the Hot Dub concept in 2012, Sydney-based father-of-two Tom has basically been touring non-stop, so the past seven months at home has been a test of adjustment in many ways, beyond the obvious financial challenges.

During lockdown, he has connected with his fans by streaming Hot Dub at Home shows. These have proven to be hugely popular. He has also had appearances on Nova Radio, and spent some valuable time with his young family.

Tom spoke exclusively to the AU Review to discuss his return to playing in front of live audiences this weekend and also revealed how his act was almost called Tom’s Video Dance-a-rama!

Firstly how pumped are you to finally DJ live face-to-face again after more than six months since your last show?

You’ve done some massive events, like Coachella, Reading, Tomorrowland etc, the list goes on, but after seven months without a gig, how does this rate in terms of your excitement levels given the circumstances?

Honestly, I feel more rusty than anything. Not in terms of DJing, with the Hot Dub at Home streams and Nova stuff I’ve been DJing a lot but performing in front of a huge crowd. Those festivals and gigs were all part of the continual tour that I have been on since 2012, never really stopping, so they were exciting, but didn’t come out of the blue. I worked hard to build up to those. So this is a different feeling.

Can you tell us about that experience as a musician being without your key asset, live shows, and how that’s impacted you and your young family over the past six months?

At first, it was very shocking and upsetting, and I frantically jumped into live-streaming to kind of keep the buzz going. But when national lockdown ended, and those numbers went down, I had to stop streaming so much and was really faced with an empty diary and I got very depressed. But gradually I took better care of myself (not drinking so much!), connected with my family, realised we have enough savings to ride it out, and really came to enjoy being around more. My daughters are amazing and in my job it’s actually a real privilege to be at home every weekend for six months. It was quite a lovely time in many ways

You’re making a lot of sacrifices to put on these two shows in Perth, leaving family and to quarantine for two weeks. How’d you come to that decision?

I need the cash! These gigs are important for me and my family to put some food on the table, and also for hundreds of WA businesses and individuals to just get out and earn some money.

A few of the other acts had to be withdrawn and the eastern states legs were postponed. Was there ever any chance Wine Machine in Perth wouldn’t go ahead?

I’m no longer at all involved in the ownership or organisation of Wine Machine, so I don’t really know. But I think it’s clear to everyone, that a lot of people worked incredibly hard behind the scenes to make this happen, and it was a massive long shot. So huge thank you to all of them.

It’s been pretty nice actually. I’m very fortunate to be in an Airbnb, not a hotel, and are allowed to quarantine with a few other NSW performers who are very lovely and chill. I think I appreciate the quiet time and ability to be super productive way more because I’m so used to having young children around, but I also do feel constant guilt that I’m not helping my partner with them (as I’m sure any parent can relate).

What’s your top hobby to pass time in quarantine?

I brought my Xbox and really like playing ’Sea Of Thieves’ with my friends. We also play a lot of ‘Among Us,’ which is great. But mainly I’m just working on Hot Dub. 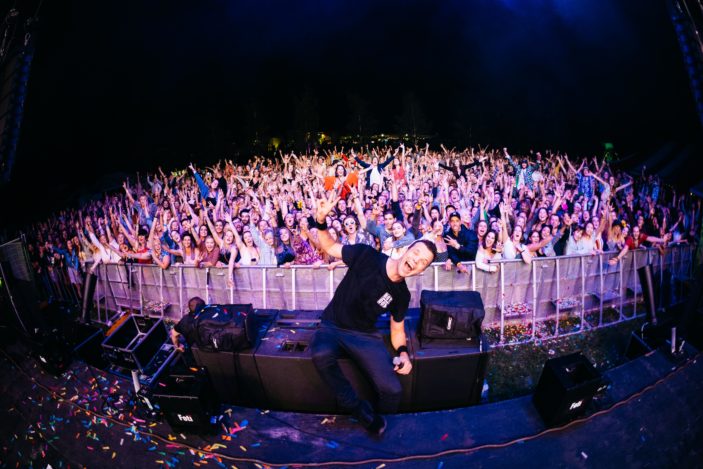 So you’ve obviously had some time to craft your set for both the Friday headline show and Saturday’s festival show. What can fans expect?

I want to come out the gates with some new stuff, so I’ve remade the whole opening, then in the body of the show I want to hit classic hot dub moments, while also sneaking in some new ones.

The Friday show is a two-hour set, so it’ll be different to Saturday. Have you something special in store for it? Any sneaky insights?

Friday’s show will be a longer, deeper musical journey. Playing at Wine Machine is like performing at most big festivals, everyone is there for a great time, I’m at the end of a long day in the sun, and many peeps won’t even know what I do. So I try to finish the day with a bang, go hard and fast, and create some moments. Friday is my own show, so it’s more about having that deeper connection with the crowd, reacting to what they want, digging deeper into the crates and adding a lot more emotion to it.

Has the six months without a genuinely live show led to any changes or reflections on the live performance you’ll deliver in Perth?

I really feel like I want to give a sense of release, of musical elevation, of togetherness, of redemption.

How do you actually decide on what makes the cut? Do you keep a list? Is it constantly changing in your head?

My life is lists! I constantly have lists of songs going, ones that I might include, ones that I definitely want to play, ones that occur to me while listening to the radio, requests I get on socials… Then as I get closer to the gig I really try to craft the setlist, so that I have a concrete plan. Then when I’m playing, I can go on detours, but I like to have it mapped out.

To go back a long way temporarily, how long had this concept for Hot Dub been brewing in your head before you launched it? What was the inspiration?

It literally came into my head the same day I wrote it on the application for the Sydney Fringe Festival in 2011. I had been experimenting with having my own audio-visual DJ show,  called Tom’s Video Dance-a-rama, and wanted to put it into the fringe, but when it came to writing it down I just couldn’t bring myself to write Dance-a-rama. When I’d showed it to my friends months earlier, my friend Jordan suggested I should theme it more, make it about time travel or something, and that really stuck with me. So I went for a walk around the park with my wife, decided I’d do a chronological dance party, then I did a post on Facebook asking for a name, and one of my mates Jackson from Edinburgh suggested ‘Hot Dub Time Machine.’ I put it on the form, sent it off and then had 2 months to actually make the show 🙂

Doing all these remote shows, like Hot Dub at Home and the Nova stuff, does that give you time to reflect about what makes your live shows so special?

It certainly feels like something is missing with those. I don’t get the same joy from it. So I’m hoping that comes back on the weekend.

How have the Hot Dub at Home streams been received? Have you enjoyed them?

Yeah, they’ve been great. It was a bit of a phenomenon during national lockdown, with over 12,000 people tuning in on Twitch. Now it’s a smaller, but a really lovely crowd, who are very appreciative and nice.

Finally, what’s your pre-live show process and preparation. Any rituals that you’re looking forward to going through before you step back on stage this weekend?

I just like to stay super focussed. I don’t do any pre-show dinners or hang out drinking, I like to give it every bit of energy and attention I can. I can’t wait.

Many thanks Tom. Good luck and enjoy the shows!