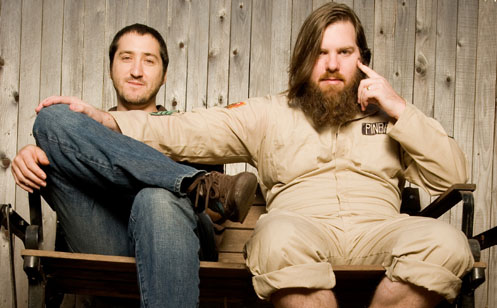 As soon as I arrived at Manning Bar with an overwhelming rush of anxiety and anticipation for what was to be the Sydney venue for their first Australian Tour, I knew things would be different after coming to the realisation that Pinback vocalist and multi-instrumentalist, Rob Crow, was in fact the one selling merchandise before the show, not to mention stepping into the room to find no barriers separating the crowd from the stage.

After I plonked myself down in the middle at the base of the stage and started chatting to Chris and Paul, two guys from Brisbane who were following the San Diego-based band for the East Coast part of their tour, they informed me that Rob (and themselves) had no idea who was the supporting act. Fortunately, I did.

Shortly before 9pm, Melodie Nelson (official name: Lia Tsamoglou) took to the stage and introduced herself. She admitted that it was hard to perform without a band, but her iPod, keyboard, and floaty vocals were doing her justice. Among her set, “Orpheus, She’s Gone” provided us with a flashback to ’60s chamber-pop, while “Meditations of the Sun” presented us with a compelling whistle tune, and showcased her creativity as the iPod lent a voice in the form of background vocalist. If you’re a lover of downtempo dream-pop, check out Melodie Nelson’s debut full-length album, Meditations of the Sun!

Perhaps it was the contrast in music tastes; but the crowd made it extremely obvious who they were there for, as they started to move closer to the stage and began to pay more attention to what was going on.

Rob Crow, Zach Smith, and Chris Prescott (touring drummer) soon emerged, and although it didn’t garner enough attention as yet, for those of us in the front row, we were exposed to some exclusive entertainment as our attention was purely focused on Rob as he wore unmatched socks, telling those who were listening that wearing matching socks was the ‘biggest waste of life’ when questioned by Chris, and witnessing how he opened his bottle of James Squire Porter with a bottle of water, much to our amusement.

There was no crying over spilled beer (from one of the punters, not Rob) as Pinback started off with “Tres”, setting the pace as a relaxing introduction to the nature of the band. With the aid of visual and lyrical cues behind them, the trio continued to entertain with “Bloods on Fire”, “Bouquet”, “Torch”, “Non-Photo Blue”, and “Syracuse”. It wasn’t until “Penelope” that everyone became thoroughly engaged and enlivened. After the song ended, someone exclaimed a request for “BBTone”, but Rob replied, “We couldn’t afford a baritone.” Zach played along, poking fun at the situation and said “Assholes!” while laughing and glancing at his partners in crime.

The next song performed, “Good to Sea”, was one of the highlights, as the majority of the crowd were either dancing or singing along… or, like myself, both at the same time. The infectious melodies continued to dwell as Pinback created the main attraction in “Fortress”, with Rob delivering some epic dance moves in the shoulder wave, moon walk and even the forward worm. But it didn’t stop there.

During the chorus, he hovered the microphone over our mouths while some of us in the front row got the chance to sing our hearts out, either chanting “Stop. It’s too late”, “I’m feeling frustrated” or “I see no sign of Fortress”. As the showstopper created a massive build-up, Rob couldn’t take it any longer and jumped down to the crowd to join in and dance along, while being surrounded by mass hysteria.

While it slightly calmed down towards the end of the set, the atmosphere amped up again as Pinback drilled into “Prog” and “From Nothing to Nowhere”, prompting the revellers with a strong and stirring response. The encores in “Sender”, “Manchuria” (an unreleased track from their upcoming album, as Zach later told me), “Shag”, and closing number “AFK” gave way to a solid send off for a thought-provoking gig for many years to come.

After the show ended, Rob and Zach stuck around to sign shirts and posters, as well as take photos with fans and answer any questions they may have. Being the curious one, I approached Zach with complements on the gig, clarifying the second song from the encore and asked a question based on Systems Officer (his side project). I have the inside scoop that he will be working on new material for SO, but not before he tours with the band across the West Coast, USA during September. Rob, on the other hand, has a more personal occasion in the near future, as he will welcome the birth of another child in less than a fortnight.

Even before the release of their upcoming LP, Information Retrieved, it seems like there’s no force stopping Pinback. I’m taking it as a sign for good things to come from the new album. 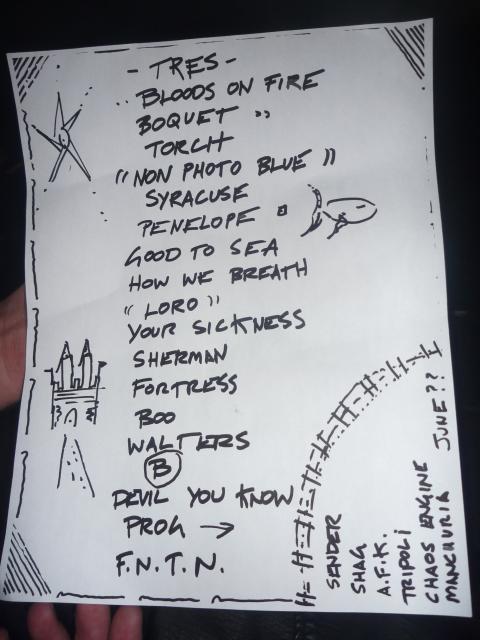 Encore was changed to: