Kicking things off for Saturday at Pickathon, Zia from The Dandy Warhols was DJing when I arrived, as DJ Rescue, who grooved us into the first set from New York’s Bodega, who delivered a high energy performance that asked everyone to “sweat the toxins out”. 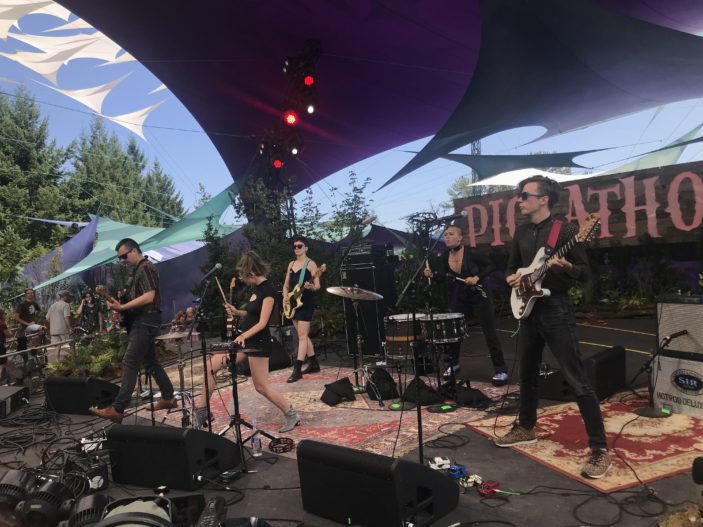 The five piece are described as “art rock”, but they are punk through and through – and their music is damn good. I like how they incorporated pre-recordings of a computer voice their sets too, and a song which may or may not have been called “Educated” was a personal highlight. The Beths played on the Woods Stage, after their late night set in the barn, while Help smashed out a sweaty set in the barn. It’s worth mentioning that Ryan Neighbors in Help used to be in Portugal The Man, and now is in Hustle and Drone, so the trio are far from newcomers to the scene – and they have definitely been a favourite of the festival. Over on the main stage, The Marias snuck in Britney’s “Hit Me Baby…” during their hypnotic set. 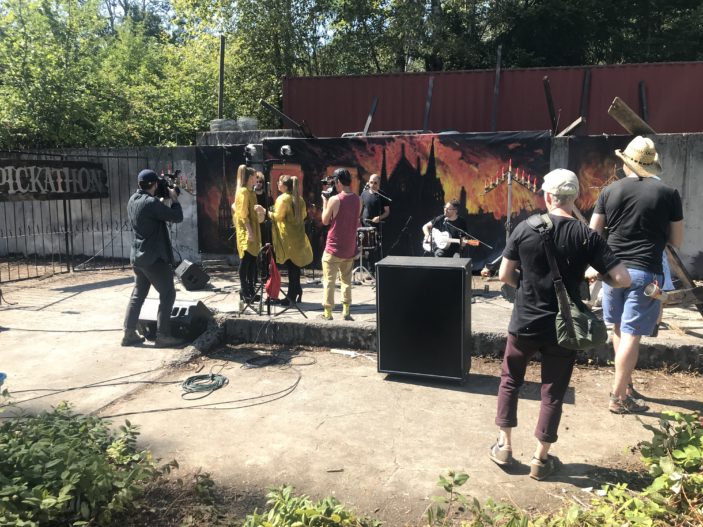 With so much happening at once on paper, it may be surprising that Pickathon is a festival that encourages your exploration, with hidden stages throughout the site. I caught Lucius (above) filming a song at a stage called the “Slab Sessions” with no more than 15 people watching, which was pretty special. They performed acoustic versions of “Strangers”, and “How Loud Your Heart Gets” ahead of their main stage set later in the day.

Back on the main stage, Altin Gün (below) hit a massive reception. They came all the way from Turkey, and are a name you may be familiar with given they were curated by King Gizzard to play Gizzfest in Australia last year. They delivered their take on psych rock, in Turkish, with a sitar and percussion leading the rhythm. Also plenty of synth jams. And speaking of jams, few do it better than The Preservation Hall Jazz Band, who followed the Turkish outfit, with their crowd in full party, singalong mode. 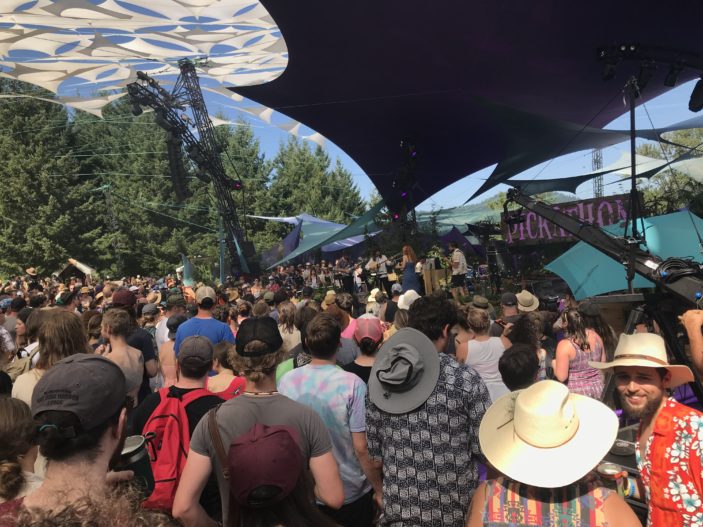 Mereba had a stunning and soulful voice at the Treeline Stage, though it was a brief encounter as I made my way to see Viagra Boys in the woods. The Swedish band ooze energy, with so much grunt and saxophone, their lead Sebastian Murphy channeling the likes of Iggy Pop and Nick Cave with a ferocious shirtless performance, covered in tattoos, as they built songs out into long, jam-like performances. They drop in the sax for good measure, and you’ll see music build to a spot reminiscent of an EDM “drop”, leading the crowd to  lose their minds in a way you don’t always see in the often short, hard and fast nature of the punk genre.

Pushing out an energy that never quite, Sebastian did pushups during “Sports”, and a long run of people crowd surfed. It was an epic time. The mic also briefly broke because of what I would describe as “respectful moshing”, so the security had to come and act as a stage barrier. The last song got dragged out into an epic performance, extended even further after a foot cramp from the lead took him to the ground. It was a song about shrimp. And white wine.

Brooklyn’s Lucius meanwhile were much more on the relaxed side, serving as a come down from the wonderful madness in the woods, opening with “Go Home”. The five piece played with more of a country vibe than I had expected, and it made for a beautiful atmosphere. “Genevieve” was a personal highlight, with so much cowbell and an incredible vibe, ending the set.

Sydney’s Julia Jacklin was one of the few returning international guests, playing Pickathon for the second time, with a trio behind her. They opened with “Body”, the lyrically stunning and vocally powerful “Eastwick”, “Leadlight” and “Don’t Know How To Keep Loving You”. Julia also took a moment to praise the festival, saying, “this festival makes me feel like I can do what I do”, meaning she didn’t have to pander to the expectations of a festival set. And the great crowd in attendance really saw her energy and presence grow as the set continued.

She played “Don’t let the kids win” solo (during which he graciously forgot her lyrics and came back), Courtney Marie Andrews joined for “Head Alone”, and then KP aka Black Belt Eagle Scout (who has toured with Julia earlier in the year) then come on to play the tambourine for her last song, “Pressure To Party”, which a lot of the crowd knew. 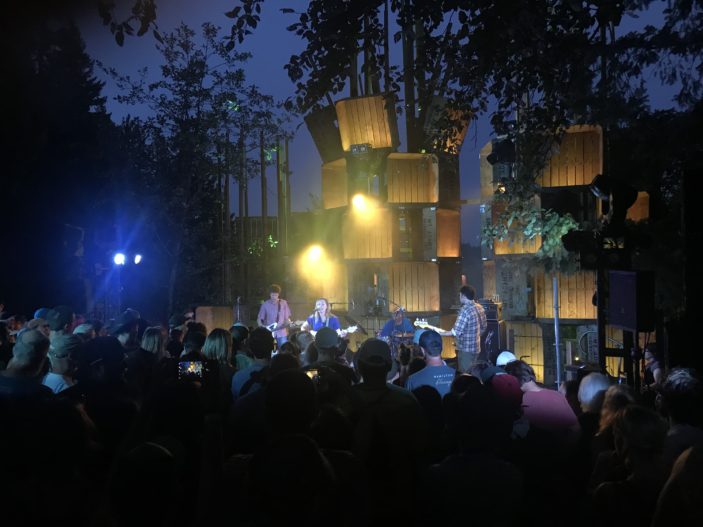 Closing the main stage was Nathaniel Rateliff and the Night Sweats, who asked everyone to “shake baby”, and shake they did. Lucius joined for “Coolin’ Out”. “Hey Mama” was a highlight as was “I Need Never Get Old”. Preservation Hall joined for “Shoe Foot” and then a helped encourage a huge signalong for the set closer, which ended with a New Orleans style procession through the crowd as the crowd kept singing. MAGICAL. And of course the first rule of a procession is to follow the profession. And if you did you would have been treated to a continuing set out the back. I think I heard the trumpetist say “well we can tick that one off the bucket list.”. It was indeed a special moment for everyone. 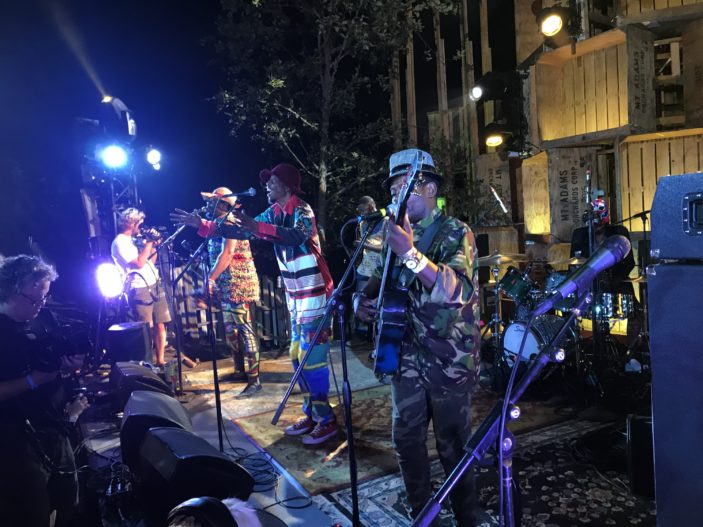 I ended my day with Congo outfit Jupiter & Okwess, who brought the African Party vibes to the festival, and kept the brass and percussion spirit left from the Night Sweats and Preservation Hall alive. And on my way out I caught Mandolin Orange, who were impressing as they made debut on the Starlight Stage. They’ll be closing the main stage on the final day of the festival tonight.