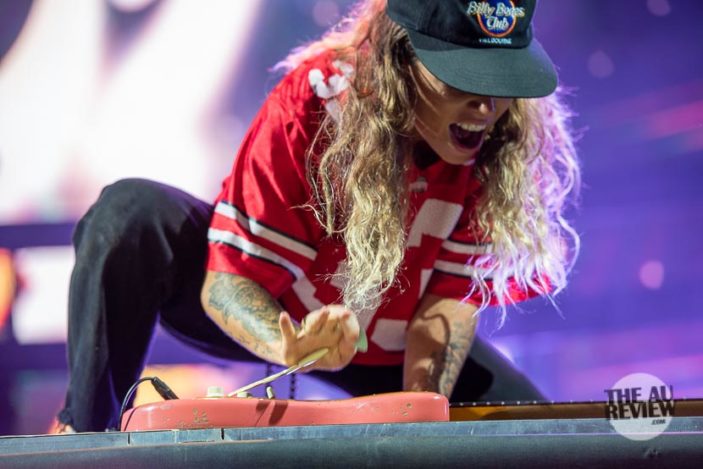 Tash Sultana finished off day three of WOMADelaide in typical brash style. Sultana has a certain way of cajoling, enticing and threatening sounds from their plethora of instruments. They are surrounded by these instruments but is in no way confined by them. As they soar and float around the stage, they set each one off on a tangent which combine together to create organised chaos. A magical way to finish the day.

In the original spirit of WOMAD, two indigenous women joined Sultana on the main stage that day. Peter Gabriel vision of WOMAD was to expand the audience’s repertoire, which it has done so over the years. Today is testament to that vision. Audiences were to experience two upcoming stars in their evolution.

Miiesha comes from the small Aboriginal community of Woorabinda (population around 950) in Central Queensland. At just 20 years old, she delivers a powerful message, inspired by RnB, gospel and soul and the potency of spoken word poetry. Her powerful debut Nyaaringu, released in mid 2020, has been recognised widely, including being nominated for The J Awards Album of the Year. The audience showed their appreciation with a standing ovation.

PNG born, now Naarm/Melbourne based, Kaiit Waup burst onto the scene in 2017 with her debut single “Natural Woman“. She has a natural yet positive stage presence that makes the audience immediately at ease. The jazz / soul influences make this a positive and uplifting set to watch.