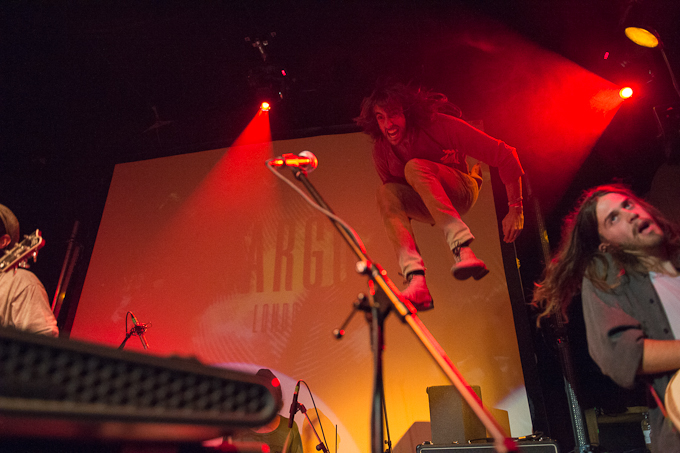 We arrived at London’s Cargo Bar just in time to catch Brisbane’s Inland Sea, who were playing today as a nine piece, opening with a beautiful a cappella number. I still don’t know how they all got over here, but good on ’em for doing it. They’ve been sounding fantastic at every show. Screamfeeder’s bassist Kellie Lloyd was next, performing with a drummer and promoting her second solo record Magnetic North. If you’re a fan of bands like Dinosaur Jr, Breeders or, yes, Screamfeeder, you’ll be a big fan of her phenomenal solo work – which sees Kellie don the electric guitar.

The Killgirls sounded great, with the lead singer rushing out of hospital to be there – I’m pretty sure he was using his mic stand to remain upright. Now that’s rock and roll. Loved their track “Animal”, and they threw in a brilliant cover of “Sabotage”. There’s a good electronic edge to their music, with loads of heavy bass. The highlight of the set, however, was a 20 second recap of all the songs they’d played for the latecomers. Something I’ve never seen before. Clever and hilarious. Make sure you check them out when you get the chance.

There was the usual brilliance of Oliver Tank, and the frenetic energy of Brisbane’s Horsefight. Ben Salter impressed with the same set he’s been pulling out all tour – some tracks from The Cat, a Gin Club cameo and a little bit of Smokey Robinson to end things out nicely. Two piece Jackson Firebird then rocked the house down as we moved into the second half of proceedings… as always, The Aussie BBQ was delivering a pile of musical treats for all those in attendance.

Jumping around the UK, Jinja Safari (pictured above) were among the bands to close out the night. Also performing were the always loveable Husky, The Drones’ Mike Noga (who performed a killer Nick Lowe cover), Sydney’s Step-Panther, Adelaide’s hidden treasures The Bowers, Brisbane’s Bonfire Nights and Darwin duo Sietta, who closed things out. Johnny Au brings us the photos…