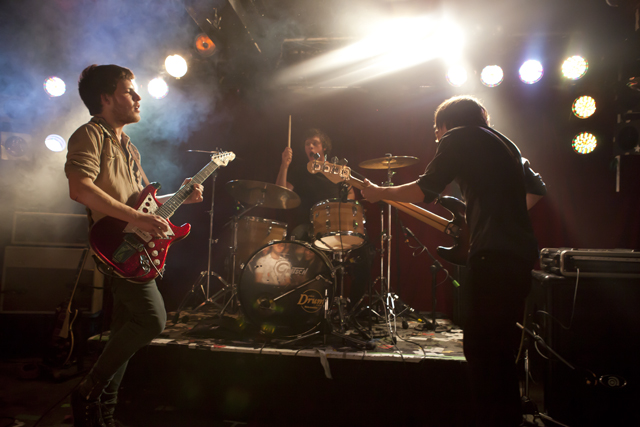 There was a sold out crowd at the Northcote ready and waiting for N.S.W young guns Papa Vs Pretty to launch their debut LP United In Isolation. First on the billing were locals Buchanan who have been gathering momentum since winning the coveted Triple J Unearthed spot to play at Melbourne’s Laneway Festival earlier this year.

Buchanan have some very well written tunes that feature sweeping arrangements, which were marred slightly by front man Josh Simons’ nasal vocal delivery. The music itself had a good energy and the band made a real effort with the stage setup including a banner and lighting display. Buchanan are still a new group whose set showed promise, however at this stage in their career their performance skills were not captivating. The boys play their instruments well but their presence was lacking in the charisma and energetic spark that elevates a show from being simply good to something truly great.

Next up were local four piece Red Coats who blew the punters away with a passionate, engaging show. Front man Emilio Mercuri has a commanding presence as he stalks the stage singing directly to the crowd and grinding on the mic stand. Their harder edged rock was slightly out of place on the indie billing, but nonetheless Red Coats’ live show was a fierce experience that was well received by the crowd, a lot of which seemed to be there specifically to watch Red Coats as the crowd noticeably thinned at the end of their performance with many people not returning to watch the headlining act.

Papa Vs Pretty started off strong opening up their set with popular singles “Heavy Harm” and “One Of The Animals”. Vocalist Thomas Rawle attacked the songs with gusto. Other highlights included nice renditions of “Wrecking Ball” and “Honey” which were well received by the crowd. The band were tight and in synch with each other and musically their performance was spot on, however having seen these guys before and knowing what they’re capable of in a live setting I was rather disappointed with their show. The intense energy that they’ve exuded in the past was not present in the band room that night and in spite of their spirited delivery, Papa Vs Pretty sounded just as they do on record, with the lack of atmosphere doing nothing to enhance their studio work, which didn’t make for an engaging set.

On the whole it seemed to be a case of the bridesmaids upstaging the bride, with Red Coats’ energetic set being the definite highlight of the evening.