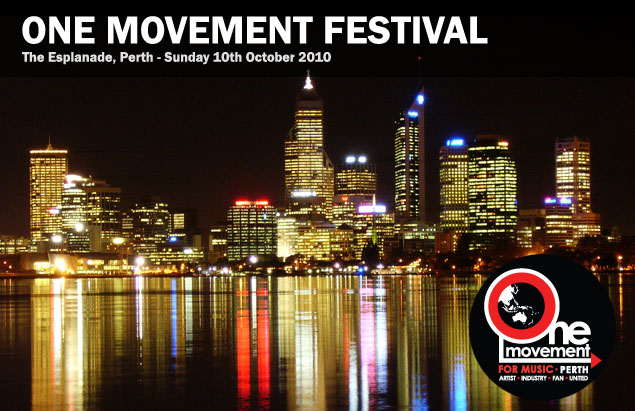 Sunday and Day Two/Three (or in my case Day 4) of the One Movement Festival, and much like the previous days
there was much on offer; with a staggering amount of music to choose from once again. The only difference between the two days of the main festival, where Saturday was warm and sun kissed the Sunday was drizzly, perpetually chilly and damp. Not that the temperamental weather managed to dampen anyone’s spirits.

My first band of the day was locals Wolves who won the chance to play at the festival. As expected there weren’t a huge amount of people around right at the start, so they didn’t get a huge crowd, but they did seem to have captured the attention of the few that were down this early. Which was a great shame given the quality of their performance. They had a great rocky sound which was complemented and enhanced by some brilliant violin/fiddle work. It gave the band a brilliant country/folk feel whilst taking nothing away from their rock credentials. It was great to see these local bands getting the exposure to both the punters, but also the industry officials.

Next up were fellow locals The Chemist fresh from their performance at the Dew Process showcase on Friday. It was another great performance from the band, indeed they really seemed to turn up the energy levels for their festival outing – with their set being potentially better than their showcase a few days previous. They managed to gather a reasonable crowd, and there is a sense that their popularity is still growing. They certainly have the songs to back up their growing popularity. They are the kind of songs, with lyrics that work both on a superficial level, but also have enough depth for those music lovers out there who love to get into the deeper meanings of songs more.

Directly after The Chemist it was across to the adjacent stage for The Jezabels who were fresh from packing out their showcase the night before.They were certainly a popular band with the festival goers, drawing the largest early bird crowd. Doubly impressive considering the fact that the weather at this moment decided to turn from windy to damp – it seemed like it was going to be the kind of day where the Big Top bands would be the best attended. What was most striking about the band was the sheer intensity and atmosphere the band creates, even on a festival stage, I think this has something to do with lead singer Hayley Mary, she has such a great captivating stage presence. Not only that the music they play is sublime, with a wonderful mixture of elements.

From one brilliant front-woman to another, up next was American Jonniene Zapata; she apologised straight off, apparently she had managed to catch a cold of the trip over. Yet I personally could not hear it in her performance, I would say you really couldn’t fault her vocals. She has a great soulful and sultry voice that worked incredibly well with the wonderful rock sound that was coming from her backing band. Dressed all in black she certainly looked the part, and with her stalking around the stage she certainly had an incredible stage presence. Having listened to her recorded work since, I would say vocally she is similar in style to the likes of Patti Smith and PJ Harvey, and maybe even in terms of style and music as well, she definitely seems to fit into the same category as those classic performers.

It was at this point that I got called away to do an interview, but thankfully my friend and fellow AU Reviewer Jennifer Morgan was on the scene to review Carl Fox for me, here’s what she had to say:

Carl Fox appealed to a large crowd hiding from the weather, with catchy smooth vocals combined with melodic, electronic tones.The tent was rather crowded when their set began, but the crowd only seemed to grow bigger after they began to play. Fox’s ability to adapt his voice from being hauntingly melodic, to demandingly edgy within various songs was impressive, and made his set both diverse and engaging. Strong, highly energetic rhythms dominated the last half of the set, falling into a perfect blend with the alternating electric and smooth sounds of the keys, and vocals.

It was then time to move on to the next act Dengue Fever, now I wouldn’t normally go out of my way to watch a band named after an exotic and deadly disease, but I am certainly glad I did this time. They were a brilliant addition to the line up; and really looked the part up on stage. They were a mixture of Cambodian and American, with lyrics moving shifting between English and Cambodian throughout; they had a quite rocky sound to them, which was balanced out by some sublime saxophone playing. They played with a great deal of energy and enthusiasm, with some wonderful quirky dance moves from some members of the band. I for one will be hunting out their record next payday.

Following them it was time for yet another Canadian band, Bedouin Soundclash, who despite the inclement weather managed to pull quite a sizeable and enthusiastic crowd. For me they had a slightly ska/reggae kind of feel to them, but one that was intertwined with a definite rock sound. There was some solid and excellent guitar playing throughout; not to mention some excellent audience interaction. Lead guitarist and singer Jay Malinowski really looked the part, all dressed in black and with the trilby, very rock and roll chic. All in all it was a great set, and did nothing to destroy my growing theory that Canada produces some of the best bands.

Then came the band it would appear everyone was there to see Cloud Control, the sheer diversity of their audience is perhaps testament to their ability to write great music that appeals to all people. Having seen them open for Vampire Weekend earlier in the year, I would say that since then their live sound has become much more polished, though without losing any of their charm or jangling. They are definitely a band with fantastic pop sensibilities and an ear for a great melody – not to mention a wonderful ability to harmonise. Gold Canary was pleasure to see once again, which got a great reception from the crowd another favourite, was set closer “Ghost Song”. The crowd was certainly with them all the way, despite the weather; though just as they were coming into their closing songs the sun came out. How’s that for the power of music?

Much like before I was called off to an interview, so with great regret I had to miss Boy & Bear, who from all accounts were fantastic. But, like before fellow AU Reviewer Jennifer Morgan was there to watch and review for us.

If you were one of those stuck wandering out in the rain all afternoon, then you may have found some solace watching Boy and Bear warm up the crowd. The boys kicked off their set with a good, foot stomping and with a
catching energy that only seemed to build with each song. The folk melodies woven into each song showed off the raw and harmonious voices of each, in a manner very reminiscent to the old country-esque style of Mumford and Sons. In the few moments when all the boys sang together, the harmonies were soul-lifting. The band played with an emotional intimacy, which was greatly helped by their obvious dedication and their enjoyment of the music. An ability to connect well with the audience, combined with their raw talent made for a very good, and memorable set.

Following Boy & Bear it was time forAn Horse, a band who are fast becoming one of my favourite Australian acts at the moment. It always surprises me how much energy and what a great sound they can create given that there are just the two of them up on stage. They played a really strong set, and really seem to be maturing as a live act. They were playing a mix of music from their new album and older songs seen previous. I have to say I am still a fan of their older work, with songs like “Postcard” really sounding incredible live. They are a band that seem to take it to another level when it comes to playing live, they still have some of the polish of the recorded sound, but they add a little roughness to the performance, which really adds some charm.

It was then across to the other side of the festival for Dan Sultan. It was a fantastic set, probably one of the highlights of the festival. A high energy set, which made great use of the horn section. It was definitely a more upbeat set in terms of song selection, the slowest it got was for track “Old Fitzroy”. You could not fault the guitar work throughout, guitarist Scott Wilson’s playing was spot on, and he certainly looked the part. But the whole band really gels well together and plays incredibly well together. The crowd was certainly into it, and their energy seemed to be feeding the band, with Sultan seemingly having a ball up on stage. For me “Old Fitzroy” was a standout track from a set that was full of brilliant songs, it’s just one of those songs.

Closing the festival out for me was Xavier Rudd, a musician I have wanted to see live for quite some time now and he really didn’t disappoint. One of the things I most like about Rudd (or at least on this occasion) is that you know he has a strong moral and ethical message he likes to get across, but he allows the music to send that music, as opposed to preaching or lecturing the crowd which can be extremely irritating and a turn off for many gig-goers. The set started off a little shakey, through no fault of Rudd’s they had forgotten to turn his microphone on, so for about the first 75%  of the opening number, it was just didgeridoo and slide guitar. Which is no bad thing I suppose. Indeed, Rudd’s mixture of the two instruments really helps create this brilliant atmospheric ambience. He didn’t seem to play much from his Darker Shades of Blue <album, instead going
for more upbeat numbers. Really highlights for me were “Let Me Be” and “Messages”, the latter of which featured an Indigenous dancer, moving around the stage as Rudd sang. It was a wonderful moment, but I couldn’t help but feel that some in the audience didn’t seem to get it, with a few laughing, which was a little disappointing. But, all in
all a great set!