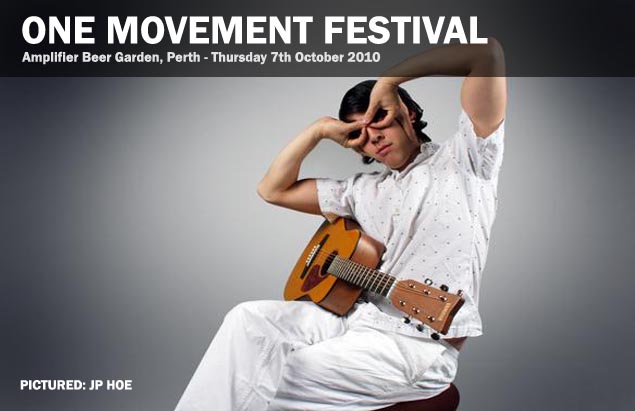 It was a warm and clear night, that saw me head down to the first of many showcases for the One Movement Festival. In many ways it was a perfect night to listen to great music under the city lights. Presented by Canadian Music Week, there was of course an undeniable focus on many of the festivals of Canadian contingent. I should point out early on that these showcases are largely for the delegates who attend the conference linked to the festival, but those who bought Gold Passes for the festival also had access, as of course did the many bands and artists playing over the weekend. This undoubtedly led to a somewhat unusual vibe/atmosphere – but one that was polite and encouraging none the less.

First up on the Beer Garden stage was singer-songwriter Colin Moore, and it was clear from the outset that the rave reviews of his live performances are completely justified. He was joined on stage by collaborator, producer and lead guitarist Ryan Battistuzzi. In the guise as a folk rocking duo, Moore’s vocals really came to the fore, he has great whiskified vocals – that is both gravelly and soulful in equal measure, and it’s a voice that perfectly matches his lyrics.

Even though there was only the two of them up on stage, there was a great richness in sound, with Battistuzzi’s guitar work really shining through. He provided great back up for Moore, a perfect side man if you will, doing just enough to get noticed, but not too much to get in the way – but when given the opportunity he really showed his skill. A few songs stood out for me, though particular favourite for me is “Dusty Cadillac”, it’s a great rollicking song which was really a lot of fun live, with some great harmonica work, and features one of my favourite lyrics in music it at the moment.

Up next was Matthew Barber, he started the set alone on stage with just a guitar; a move which really let his voice shine through; he has a voice which has a great textured soulful quality to it. This was the first time I had heard any of his music, I had listened to some of the other band’s albums or music before hand, but not Barber’s and I was really blown away by the sheer quality of his music and his lyrics.

He was joined on stage shortly thereafter by members of Dead Letter Chorus who served as his backing band on this occasion. The fleshed out sound brought about by the band really introduced a great sort of classic rock kind of feel to the music. They really added a whole extra dimension, with some great guitar and keyboard interplaying going on in the background. What was most impressive perhaps is that this was essentially there first time playing together on stage – but really they gelled really well and sounded great from where I was standing. Highlight for me was the set closer “True Believer”, the whole set was of supreme quality, but last song, really took it up a notch; it was a near perfect pop song in my opinion.

Third on stage where Canadian rockers The Trews playing what I think was their first Australian show. Within ten seconds of being on stage they completely justified their billing as Canada’s premier rock band. From start to finish they absolutely killed it, they looked the part, sounded the part, everything just worked. They have a great rock and roll swagger about them, with some great songs that really got the rather reserved crowd engaged. From opener “Can’t Stop Laughing” right through to set closer “Hold Me In Your Arms”, they had everyone’s attention. Songs like “Poor Old Broken Hearted Me” really highlighted their stellar harmonies, all whilst maintaining this great rock feel.

The guitar work was really solid and impressive throughout, great interplay between all the guitarists, and some great bass lines in there too. What was perhaps most clear however was that The Trews write some of the greatest rock songs out there, the fact that I still have parts of the chorus stuck in my head five-six days later is testament to their skill at writing some great catchy and fun rock songs. They were potentially my favourite band of the night, and one of my favourite finds from the whole festival, which is high praise given the sheer quality on show at both.

With a slight shifting around in the line up, next on were psychedelic rockers Final Flash, who really put on a vibrant and fun performance. It did to some extent sort of descend into a pretty awesome 20-25 min psychedelic jam, with little talking in between. All in all it was quite a intense performance as well, but not too over the top. It was assured and confident and featured some great playing from all involved really – with the guitar work being of a great quality. I really was a big fan of the fuzzy distorted guitars, offered a nice change from the crisp and clear guitar sounds from the bands which played previously. I would be interested to see a full headline show by these guys, but even in the thirty minutes they were allotted they really made a good impression, and I was impressed at how well the tracks translated to the live setting. Here’s hoping they will be back on our shores again not before too long.

The penultimate set of the night was by death country pioneers Elliott Brood, and I have to say they completely exceeded expectations. I have wanted to see the band live for quite some time, and they most definitely did not disappoint. It was stunning live performance, full of energy and charm. If they didn’t gain new followers from that thirty minute performance I don’t know what else they could have done. They showed a great versatility throughout, shifting between guitars, ukuleles and banjos throughout, not to mention some sort of bizarre looking foot organ/pedal contraption. Whilst throughout drummer Pitkin kept up a steady and unwavering beat. Other than The Trews this was probably the most energetic set of the night, even sat down guitarist Casey Laforet was full of energy. It was really a commanding performance, from a band who are seemingly at the top of their game. Highlights of the set (though all were great) were Without You Again and The Valley Town, the latter of which featured some duo ukulele work as you will never have heard it before.

I won’t lie I felt a little sorry for the final performer JP Hoe, for a start he was having to follow a great set and secondly, armed with only a guitar and his voice, he was going to have to tame a crowd that by this point was getting both a little restless and boisterous. But somehow he managed it, all while putting on a solid and assured performance. He played a mixture of old and new songs (he has a new album coming out early next year) and was able to mix both great up tempo songs with some great slower and more soulful ballads.

JP really has a great voice, which is both rich and soulful and has a wonderful maturity to it. Despite being alone on stage, he always seems fully in control, which a charming stage manner.  The highlight for me of his set would have to be “Sing Me A Song” which is this beautiful song, which starts off slow enough but breaks into a great chorus, it’s a song which really highlights the quality and versatility of his song. I was also struck by the quality of his character as well, both in stage, through song and afterwards he came across as a really great guy, willing to have a chat about music, and to highlight his friends in song.