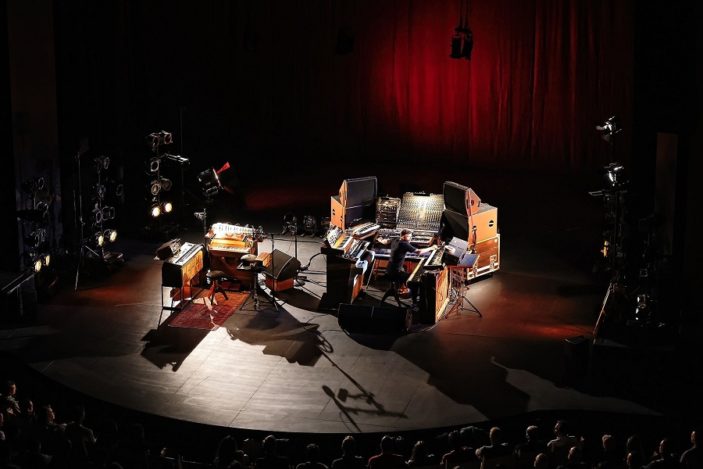 Nils Frahm is just some guy on a stage fiddling with knobs, tinkering with futuristic glass harmonicas, and clanging away at keys with a penchant for building waves of contemplative sounds. So you can soundtrack whatever stressful thoughts you may have brought with you on a Thursday night.

Across the better part of a decade, the 39-year-old German composer and record producer has been one of the constants at Sydney Opera House, eternally welcomed into our city’s most prized echo chamber simply because the man is a consistent hitter when it comes to sold-out crowds and excellent performances. He is a showman, even if he doesn’t act like it.

Whether you pay attention to what’s happening in front of you or you’re off in your own world, Frahm has an uncanny ability to complement whatever mood you’re in with whatever sounds he chooses to produce at that time.

Falling in line with contemporary maestros that favour ambience and eclecticism, such as Max Richter and Ólafur Arnalds, Frahm comes from that school of post-modern composers perfectly content with leaving tension unresolved, teasing you into a state of elevated euphoria before letting you drift off, cordless, into the night sky.

This isn’t Jamie XX or Squarepusher. Frahm’s large, long and high-minded pieces seem like their building towards something until they dissipate in an instant, fading amongst a steampunk-ish set-up of Daft Punk proportions. There are two stations set-up on stage for the second of three concerts Frahm is to perform as part of Vivid Live. The affable musician jokes with the crowd between shuffles, switching between the side with that laser-like glass harmonica and one where he looks much more comfortable, surrounded by electronics and moog synths. Between both, he is just one guy creating these immensely satisfying ambient soundscapes that build towards nothing in particular, maintaining a whispy and barely-there tempo with a lot of space to fill.

It’s frustrating at times. But in a good way. When the low-end does kick in, a few scattered souls start wriggling around in their seats while others wait for something more robust to hold onto to. Most of us are swaying out of rhythm, I suppose no one’s quite sure of how to surf these waves of sound Frahm keeps throwing at us. He gets up occasionally to wipe the sweat of his face with a towel. The intensity in creating these dense, sombre pieces is not to be taken lightly, even if it doesn’t seem like the plainly dressed musician is not physically doing much on stage.

These are busy, winding projects that are as long as anything he has made to date. The entire set, including encore, comprises just five songs and yet it feels like we get a lot from Frahm and his boundless creativity. The pieces are mostly taken from his new album, Music For Animals, which is due out later this year. All of them land well, ranging from delicate and soul-stirring to electric jolts of noise purpose-built to shake the stress out of you.

Frahm hasn’t played a show in over two years. This is also my first concert in just as long. “The second is always going to be better than the first,” he jokes. And yet I wonder how much more he could improve on this, or how bad the night before must have been. Fans of Frahm’s formless modern classical music will walk away more than satisfied with his new material, of that there is little doubt. However, it’s also a pain to see our evening with Frahm take so long and yet feel like it’s over before it even began.