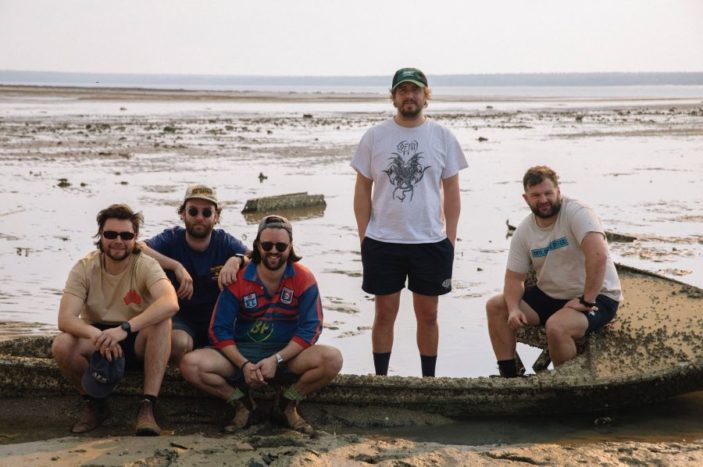 We have updated our Discovery playlist on Spotify and Apple Music with ten new tracks. This week our Track of the Week is “Jack”, the new single from Bad//Dreems. “Jack” is a song we all need to listen to. It’s a song about truth-telling, about telling the black history of Australia. Of acknowledging the mistreatment of First Nations peoples and of telling their stories.

Bad//Dreems guitarist Alex Cameron explains: “Like many others we were not taught the true history of Australia at school. We were not taught about the original custodians of this land and their civilisation, the oldest on Earth.

They have also launched a podcast, Hoo-Ha that features ‘First Nation friends and acquaintances’. You can catch them live as they have a bunch of dates lined up over the next month. Head to their website for more details.

Indie-rockers Grxce have dropped their debut single, “Pretty Boy” and it’s a cracker. Fronted by Jamila Grace, it’s a timely reminder that the pretty boys aren’t necessarily the best choice. With punchy guitars, beautiful vocals and lyrics that cut through, we can’t wait to hear more from Grxce.

Speaking of relationships, Sydney’s Imogen Clark is back with “Compensating”, dealing out some blistering comeuppance to an ex-lover. Imogen is holding the gloves of victory after delivering the knock-out blow at the end of this one.

It’s been five years since New Zealand’s Fazerdaze released the fabulous album Morning Side, or which single “Lucky Girl” racked up over sixteen million streams on Spotify. Amelia Murray, the artist behind Fazerdaze is back with a new EP Break!, and today we feature the focus track, “Thick of the Honey”. With dreamy vocals, synth beats and claps in just the right places, “Thick of the Honey” takes us on a shimmering sonic trip.

“The Sea” is the frankly stunning sophomore single from West Australian newcomer Sophia Hansen-Knarhoi. The single, which “chronicles the loss of Sophia’s childhood self”, is the second single from her forthcoming EP – which we’re definitely keen for. The single is a dialogue between Hansen-Knarhoi and her younger self; and the process of writing and recording the piece seems to have been a cathartic experience. Quietly devastating, there is a strong folk song feel to this one.

“The Fish Song” is the focus song from Monsters, the debut album from Swedish artist Lovi Did This. The delightfully off-kilter track, is a captivating melting pot of electronic beats, clarinet, guitars and entrancing vocals. You’ll quickly see why their music has been described as “Twin Peaks-pop”. We can’t wait to dive into the rest of the album.

“Thinking Much” is the debut single from The Model Home, a new musical project from Glasgow’s Fionn Crossanb (Kilgour) and Caolán Austin, a Derry-based musician and producer. The track, penned in 2020, and recorded apart in the duo’s bedrooms, is a well crafted, stripped back slice of experimental indie folk.