The first 40 bands have been announced for the annual Music Matters LIVE showcasing festival in Singapore, featuring 11 bands from Australia and a group of musicians from all over the world. Russia, Philippines, South Korea, South Africa, Vietnam, New Zealand, Canada, Switzerland and even Kuwait are among the countries represented in this first announcement, with more names still to come.

Among the Australians announced for the lineup are five artists from Perth, stemming from WAM’s partnership with the festival, including COIN BANKS and Our Man in Berlin. Michelle Xen (pictured above), who headlined our 6th Birthday Party at BIGSOUND will be attending, as will Newcastle’s Twin Lakes and Sydney’s Spender. Among the highlights from the rest of the list are IO from Taiwan, IDIOTAPE from South Korea and Mama’s Gun from the UK. The full lineup is below.

Music Matters LIVE takes place across 12 venues – primarily located in Clarke Quay – from May 20th until the 23rd in Clarke Quay, Singapore. For tickets and more details head to: http://www.musicmatterslive.com/

The AU Review are proud to be media partners of Music Matters 2015. Stay tuned to the AU for continuing coverage of the event in the lead up and on the ground. 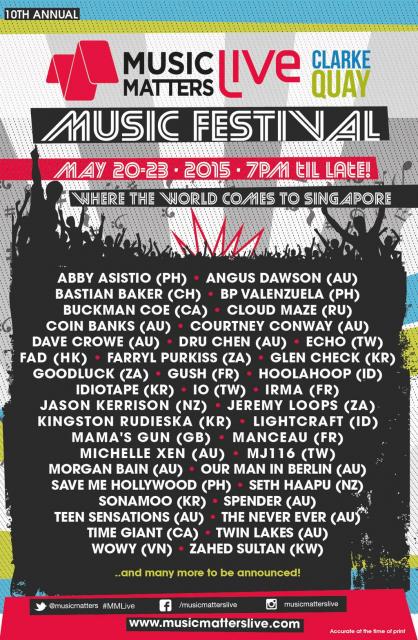