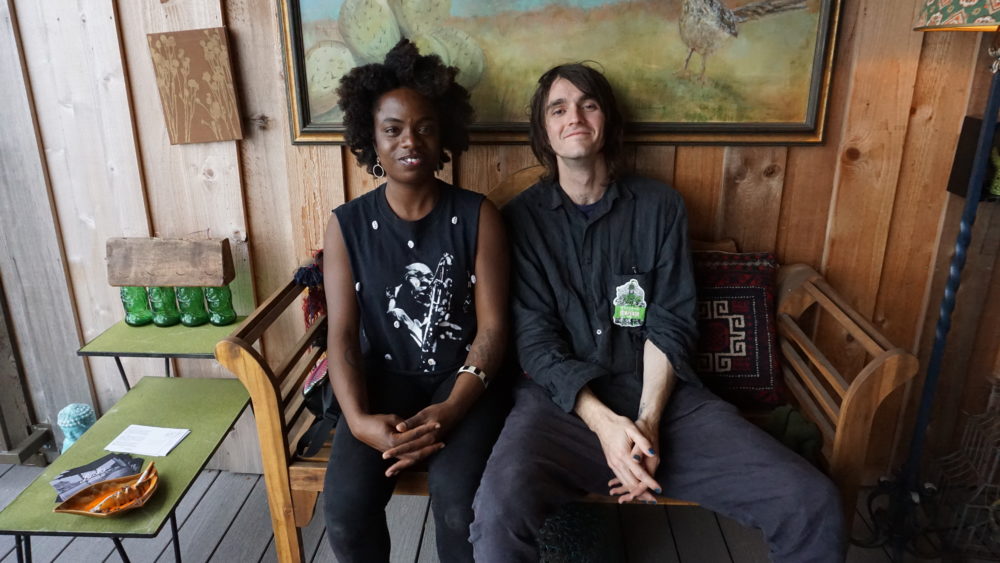 Performers and now-fierce collaborators Sunny War and Micah Nelson (aka Particle Kid) have been bringing their own brands of rich music together in LA for a minute now, with SXSW being the latest platform for the artists to strut their stuff. And now they’re releasing a split LP under the name “Particle War“. With shows throughout the Austin festival and Willie Nelson’s Luck Reunion, we caught up with them at the latter for a chat.

Thanks for sitting down to chat to me today. You’ve had a busy year both of you releasing albums in the last twelve months and now you’re releasing an album together. Can you tell me a little bit about how the two of you met and where that split LP… where that conversation started.

Micah: Well, I met Sunny, actually years ago when I was working at Two and Two Pier Café, and you played there. I was like, it was either me or Milo curating the music there and you played a little set with some guy on bass.

Micah: Yeah, the Anus Kings, that was like, a mind-blowing little set. I’d never seen Sunny, I just heard of her around Venice, you know, and I knew she was an important artist and so when I met Andrew, her manager, at The Hen House, which is a studio where I just made a record with Insects vs. Robots; Sunny was going to make a record there, too.

Andrew came over and he liked my album that I’d just made there, the Particle Kid album, and so we started talking and I ended up playing on Sunny’s record. It just kind of became this little, natural thing where we were just playing on each other’s stuff since we were always around. We just became friends, we were talking about making a Sunny War record with me producing. It just sort of evolved into like a split LP, because I had a handful of songs and she had a handful of songs and we just thought we’d make on LP with both of our songs and we’d play on each other’s songs. That’s what happened.

When you’re playing on each other’s songs, is there a collaborative process inherent in that?

Sunny:  Because, because it’s only if they say, “Okay, maybe you can play bass on this, or sing background”, or maybe I will say, “will you play piano?”

Micah: Yeah. It depends on the song.

But that must be, then, a quite enjoyable process because it’s (for at least one of you in that scenario) a little less pressure. Or is it more pressure because you’re being thrown in?

Sunny:  Well, it’s just like, we had our own songs so then we just, I think we both started out with like, two or three songs and then it was like, “Do one more, and then do a cover.” So it’s more like a split album.

Micah:  It started out as more of like an EP, like we were just gonna do like a split 10″ or something and then we kept writing more songs and actually I remember when you wrote “Memories,” I heard that song and I was like, “Aw, shit. Now I gotta follow that up.” That kind of made me write a fifth song, and then we both had five songs. Then we each did a cover. Then we had a full album. But we were just kind of making it up as we went.

And live today with you both here. I mean, I sadly missed your set before, I will be seeing you shortly. Are you jumping on with each other today?

Micah: Sunny is going to do some interpretive dancing on my set, and she’s kind of like, like the height man. She might play with Harlan’s ass. He has this incredible technique where he puts a pillow in his pants and Sonny plays it with the sticks and she’s got this sound, this undeniable sound.

Sonny: Might have to bust out Harlan’s ass. But, yeah.

That’s the coin of the day. Depends on how late in the night it is. So at the moment, you’re touring your latest record. Can you tell me a little bit about “With the Sun” and how that record evolved, because it’s pretty fresh isn’t it?

Sunny:   Yeah, well with “With the Sun,” the songs I think I had for two years before I had a place to record. First I was trying to record with my friend Elvis, who’s in a band and then they were touring a lot, so it was like I could only work on it when he was in town. Then I just started to look for another place and I knew Jeff from Insects vs. Robots, he told me to try to meet Harlan to see if I could record there.

I just ended up recording there, which was better because, I think it was just better because it was in Venice. I feel like it went pretty fast, the recording.

Micah:  Yeah, we were all there already, like recording, and stuff.

So were you doing the “Everything is Bullshit” record at that time?

Sunny: I think you were, you were done with that.

Micah: Yeah, I had finished Particle Kid, the self-titled one, and then right after that is when Sunny started coming [onboard] and, but I was still hanging out there. Hen House is just this ongoing factory of recording and just like, art, and whatever is happening and so it was easy for Sunny to bring her songs there and just hit the hotel at 4:00 A.M. sometimes, that’s how you work there. It all happened pretty fast. I was making “Everything is Bullshit” at home on my four-track set recorder kind of at the same time as all that.

You were busy, though, you were making a lot of music.

Micah: I didn’t feel busy. It all flowed through songs, but yeah, there was a lot going on.

Looking ahead to the rest of the year, what are your plans for each of you? Have you got a lot of touring lined up? Are you making more music?

Sunny: I’m trying to make more music and write and trying to … well Micah got a cat, so I was thinking maybe I could get something like that.

Micah: They could be friends.

Sunny: Not a cat, but maybe a dog, you know.

Micah: Just make sure it’s a small dog because she gets freaked out by dogs, but… that would be good.

Sunny:  But maybe a small dog would be alright.

Micah: It’s inspiring to have an animal around. I’m making an album when I get back to Venice after this thing. I’ve been on tour, actually, this is kind of the end of this tour that I’ve been on of the west coast. I’ve been playing with a couple guys from Insects vs. Robots, Jeff and Tony. We’re a three-piece and we’re gonna make a record like that, just I have some new shit and we’re going to record it straight to tape. We’ve got a two inch machine at The Hen House now, so we want to try to capture it pretty live and fresh off the tour while we’re warmed up and stuff.

Good time to do it. Well thank you both very much for your time. I’m really looking forward to the set this afternoon. It’s a good vibe here. It’s a nice part of the world.

Micah: Thank you for that.

Particle War will be out on 20th April 2018. For more details head HERE.