On Saturday Lollapalooza forced its festival goers to make their toughest decision yet. It was a choice between two very different type of Weekends or one of the biggest DJs in the world.

The Weeknd earned top billing on this years lineup, but it was the long awaited return of Vampire Weekend after a 5 year hiatus that had me truly buzzing.

It was by far the hottest day of the festival as the sun blistered the 100,000 plus in attendance but the packed lineup provided all the relief the crowd needed.

Here are the highlights of Day 3.

The Weeknd has become a pop megastar. Saturday night’s show in Grant Park cemented the deal. Drawing by far the biggest crowd of the weekend, girls, boys, parents and grandparents all gathered to dance and sing and bask in The Weeknd’s unmistakable pitch perfect voice.

Flying through hit after hit ranging from “Earned It,” to “Starboy” and “The Hills” The Weeknd thrilled the crowd and let the biggest sing alongs of the festival. His incredible stage presence, impressive setup and overall like ability on stage shows The Weeknd has earned his superstardom. 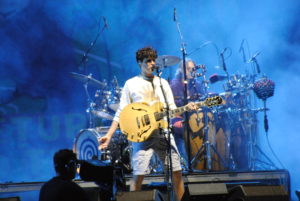 There was absolutely no way I was going to be missing this show. After 5 long years, a lost band member and many rumors and delays on recording Vampire Weekend was back playing a major US festival and the crowd was ready.

They started their show in perhaps the most ironic, comical way possible by playing A-Punk three straight times, over and over, You sure you want us back? They were asking. The crowd responded with a roaring yes and what followed was the happiest of reunions. Bringing their incredibly, deep, fun repertoire from their three standout albums.

The new look of the band with an added guitarist, percussion, piano and backing vocals really brings their sound to another level. There are few things more fun than a Vampire Weekend show. It’s so sad we had to wait so long to experience that again, but they are back and I couldn’t be happier.

The most celebrated moment of the entire show was when lead singer Ezra Koening informed the Lolla crowd that the new album was finished and they will be back soon to play all of their new music. We can’t wait. 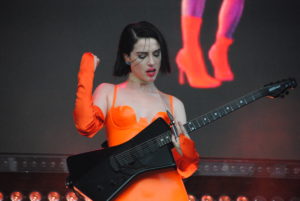 Anne Clark is her given name, but the persona of St. VIncent on stage is a powerhouse. She exudes confidence, power and so much talent on the guitar. With just her and her three members positioned evenly left to right on four separate platforms, St. Vincent stood strong on her little block for the entire one hour set.

She didn’t need to take a single step to own that stage and the day of Lollapalooza. She is a rock star, a guitar genius and an incredible sight to withhold on stage. By far she was one of the highlights of the festival. 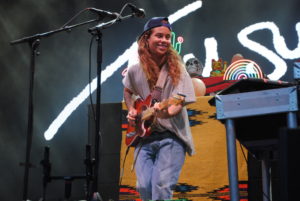 There is nothing like seeing an artist like Tash Sultana for the first time. You hear stories, and you think you know what to expect, but nothing can prepare you for the actual experience.

She was simply phenomenal, with her insane likability, her incredible talent, and unbelievable voice, Sultana floored me and the many others seeing her for the first time. This Aussie superstar is the greatest discovery I have made at the festival and I will never miss her at another festival ever again.

Tash wasn’t the only Aussie gracing Chicago. Vera Blue and her incredible soothing tones took over the Toyota Music den and her giant smile won over multiple hearts. Meanwhile, direct from Splendour in the Grass, Amy Shark rocked the stage whose voice brings to mind a mix of Halsey and Alannis Morisette. I was totally won over.

The 2018 edition of Lollapalooza wraps up on Sunday with Jack White, Odesza, Portugal the Man, Plaboy Carti and many more.