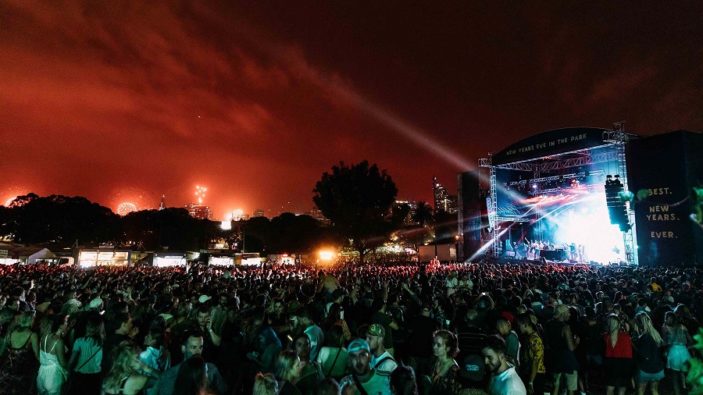 From all accounts, New Year’s Eve 2022 will go down as one of the biggest in Sydney history. Nothing particularly shocking or unconventional happened, but that pent-up lust for celebration that has remained so tight-packed and anxious during pandemic-sanctioned (and necessary) lockdowns, resulted in some truly spectacular events throughout every corner of Sydney.

And Victoria Park was no exception.

For a good few years now, NYE in the Park has been Sydney’s only New Year’s Eve music festival. We used to have Shore Thing in Bondi, but getting home from that each year was an absolute nightmare. Victoria Park on the other hand – much easier and more accessible.

And convenience counts for a hell of a lot on New Year’s Eve.

With that crucial part of logistics well taken care of, organisers put on one of the most consistently excellent NYE in the Park editions to date, headed by Flight Facilities and supported by the likes of Cut Copy, San Cisco and Lime Cordiale on the main stage, flanked by a whole heap of DJS and producers at two other smaller stages that kept that party fueled well past midnight.

In fact, many would go on to party up until the early morning at the official after-party held at Ivy. In terms of serious (and quite intense) party vibes, no one would have left wanting.

And yet while the performances were uniformly excellent, with standouts Cut Copy and Flight Facilities feeling like opening acts for the post-midnight fun curated by Poof Doof, not everything went off without a hitch.

Sponsors are necessary, but when they limited the drinks list at a New Year’s Eve event, things can get a bit iffy.

The drinks list was outrageously limited to just the sponsors, and while some were great – like NED whisky – others didn’t quite fit the bill for those who wanted some variety. Even the incredibly spacious and, quite honestly, worthwhile (how the toilets were kept clean constantly is pure magic) VIP tent had the same drinks list as everywhere else. Speaking of which, the exclusive food in the VIP area (pulled pork sandwiches and a vegetatian version) ran out much too fast, before a time when most people would have wanted to refuel.

Food options were similarly limited in the general area, with the standard choices of burgers, gozleme and hot dogs with very little choice beyond that.

Those parts of the festival did cut NYE in the Park down a notch, but there was very little to be mad at when an act like Flight Facilities comes on and completely smashes it out of the, well, the park.

Perhaps this year with a few more food and drink options, NYE in the Park can really outshine most other NYE events in Sydney. We undoubtedly have the talent for it.