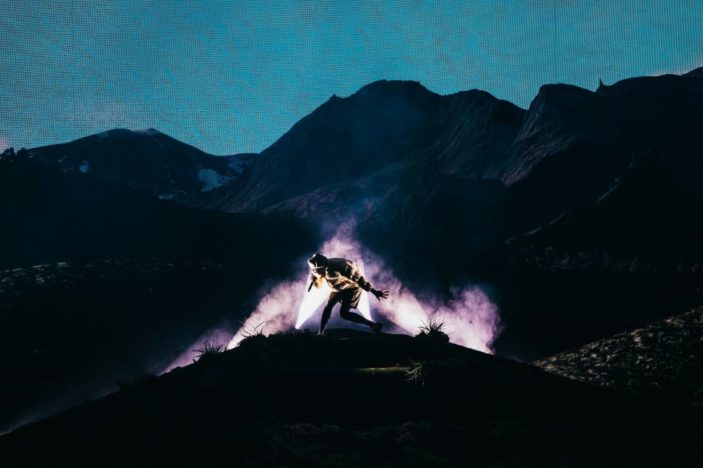 Tyler, the Creator has grown immensely as a performer and is not only capable of commanding an entire arena with just a – highly polished – stage design, a microphone and a ridiculous amount of energy. In 2022, the 31-year-old musician adds something to the confidence he’s so clearly expressed since he first stomped onto the scene as the de-facto leader of Odd Future – sophistication. Tyler’s show is stylish, sophisticated and well-rehearsed, harnessing the chaos that once kept him from being taken too seriously and using that to power what is genuinely a headline-worthy show.

While I can’t profess to be as hardcore a Tyler fan compared to most of the crowd packing the undersold Qudos Bank Arena, I’ve not only seen the man live about four times, I saw him shortly after he first burst onto the scene. In a rather messy fashion, Tyler and almost all of Odd Future packed into the Sydney Opera House for Vivid Live the same year “Yonkers” turned into such a massive underground hit. This was shortly after the talk-show performance of “Sandwitches” that drew all types of music fans towards the group.

That show, deep into the bowels of Sydney Opera House at The Studio was a mess. It was exactly the mess fans of Odd Future’s bare-bones, pragmatic hip hop wanted and while we all screamed “wolf. gang. wolf. gang.” at the top of our lungs like it was some sort of death metal concert, it was clear these kids didn’t really give a fuck about anything but hyping the crowd up.

Then something changed with Odd Future. As more and more artists from the collective began to establish their own identities, perception started to evolve. These were art school kids as much as a Pharrell Williams or a J Dilla. Thoughtful, musically inclined and considered. Frank Ocean shot ahead of everyone else, but artists like Syd tha Kid and Earl Sweatshirt echoed just how credible this collective was becoming.

With Goblin and Wolf, Tyler was quickly establishing himself as the edgy rapper of the 21st century, blessed with a bass-heavy baritone voice that he’d use in some uncomfortably honest raps. His unfiltered approach landed him in hot water more than a few times, making Tyler an OG victim of what is now known as cancel culture, targeted by infantilised go-gooders who quickly discovered that social ostracism and boycotting could be weaponised as long as you exaggerated how offended you were about something.

As such, the man was even banned from performing in Australia for years, sparking an intellectually lazy and incredibly boring debate about separating art from the artist. This happened at a time when the Australian music industry was, in an effort to be more “inclusive,” more than happy to overstretch a sense of thinly-veiled virtue, upheld by media who were steadily profiting on progressive politics. The Tyler ban lasted for years, unquestioned by an increasingly overzealous culture of performative wokeness.

Fan-favouite Flower Boy followed, showcasing a Tyler that had clearly been influenced by the boundless creativity that surrounded him. It was musically credible, calmer, more thoughtful and dynamic. Quite quickly, the once one-dimensional rapper became much like another emcee from the same era who was also showing a tremendous amount of growth – the late Mac Miller.

Both Tyler and Mac had similar musical trajectories, in that their musical outlook expanded and showed actual growth from album to album. Both careers were defined by a sense of exploration, which makes it no surprise that Tyler’s latest project, Call Me If You Get Lost is themed on travel.

Not just that but his stage design is themed on travel, looking like a constantly evolving series of landscapes as Tyler takes us through an idyllic Camp Flog Gnaw. Serving as something of a hiker performing at the top of mountaintops, at times laying underneath the stars and even directing chaos as rolling pastures are burnt to the ground.

While watching him dance his way across the stage to the funky “Wusyaname” and express the soul of R&B-inflected Flower Boy cuts “911 / Mr Lonely” and “See You Again,” I can’t help but compare Tyler now to Tyler as I first saw him. The growth is not just significant, it’s admirable.

But don’t think there was plenty of chaos. Tyler could never blanket a show with softer jams and so he took us travelling throughout his entire career, segmenting the crowd-pleasing set list by album starting with the latest and working his way through to the Grammy-winning Igor. With older songs like “She” and “Yonkers” wedged in and almost brushed over, you can clearly hear how more comfortable Tyler is when his productions rely more on instrumentation.

While “Runitup” put a fairly middling cap on the night, the centrepiece was the hellish bass of “NEW MAGIC WAND” and you can tell Tyler thoroughly enjoys performing this as much as the crowd enjoyed jumping around to it. The almost punkish anthem, a complete mirror opposite to “Earfquake”, was the true close of the show and one final burst of energy felt across the entire arena.