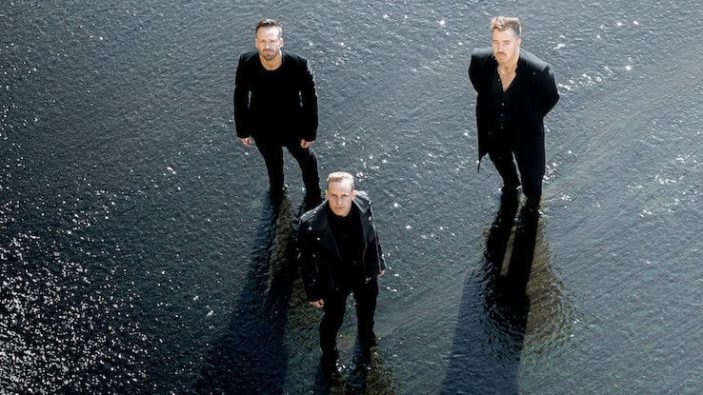 What a band. What a gig. What a venue.

Local boys Rufus Du Sol just packed out The Domain twice as if it was Field Day in 2007, presenting one of the rare times in Sydney a festival atmosphere had been purpose-built primarily with one act in mind. Yes, there were two support acts and both were fantastic, particularly the reliable and aggressively talented Jon Hopkins, but it’s not very common to see such an occasion swamped around just one act in particular.

This wasn’t just a concert, it was a hero’s welcome for what has been one of Australia’s most credible musical exports over the past decade. And it wasn’t just a hero’s welcome, it was a celebration of how bloody far the boys have come since their days as fine-print at festivals like Homebake and Laneway. The former of which got a special mention during the rapturous two-hour set, with a clearly emotional Tyrone Lindqvist assuring the crowd how much their growth has meant to them, and how big a part Sydney has played in the whole thing.

And what is the whole thing? Well, an immortal 4K concert filmed live from Joshua Tree for starters. One that has gone on the soundtrack just about every house party held around Australia, as well as contemplative nights on questionable substances spent sinking into the brilliantly conceived “Solace” and the heavenly “Innerbloom”.

Number one albums. Grammy nominations and wins. Even recently, their latest album Surrender has reiterated just how musically gifted RDS is and how going bigger, bolder and more melodic changed their sound for the better when they released their second project, Bloom, back in 2016.

There was little question as to how this concert was going to go down. And the best possible thing that could have happened was that Rufus Du Sol put on exactly the show we expected, with few surprises.

Most entered early to the sounds of Luke Alessi of Rufus Du Sol’s Rose Avenue Records. And he did what he needed to do. Serviceable house-inflected productions to set the shape of things to come, testing out the impressive sound system presenters Fuzzy had set up, which included three tall boomers far back from the stage to ensure those with the worst view still had the best time.

VIPers had to compromise a front-center view of the all-important visuals in order to carve out their own dedicated dancefloor, but they got their own bar as a constellation – essential given just how slow and chaotic the bar queues moved from the two set up for general access.

As soon as Rufus Du Sol kicked off their set at 8:45 pm it was hard not to feel the elation emanating off the stage. It was clear the band wanted to make this one of their most important shows to date, with all of their families and friends in the crowd along with tens of thousands of their biggest fans.

The lighting show reiterated that. Considered, minimal but incredibly effective as a flurry of strobes, smoke and precipitating white confetti rained down on the adoring crowd, who hung off every one of the band’s massively textural jams, from the opening “Make It Better” through the early highlights “You Were Right” and “On My Knees,” the latter representing the band’s penchant for taking their biggest studio hits and stretching them with aplomb, re-shaping the production so it felt appropriately large and anthemic.

Perhaps the best part of seeing Rufus Du Sol live is hearing how thoughtful their enhancements are. Much like the “On My Knees” re-shape mentioned above, many of these songs were elevated by these flourishes, particularly from drummer James Hunt. Most importantly, production seemed to be pared back at parts where these instrumentals were key, allowing us to really sync with the melodies that drive these songs and hence, feel them a bit more.

Details matter and this set was full of them.

This was especially important during those more penetrative productions. You know, the ones that have separated Rufus Du Sol as more than just another banger-laced EDM act but one with soul and conviction behind their songwriting. The one-two emotional gut punch of “I Don’t Wanna Leave” and “Solace” would have seen a few tears fall in secret. And “Innerbloom”. Well, let’s just say it was exactly what you have expected.

Earlier in the set, Lindqvist spoke on how he was recently married and sang “Next To Me” to his wife before the group launched into the beautifully written song. It was these moments of sincerity that really hammered home how important these two back-to-back outdoor shows were to the band. And they were important to us, as fans, as well. They showed that Rufus Du Sol really deserve to be mentioned up there as more than an EDM act in the music industry. They are making some of the most beautiful music in the world right now, pulling together commercial and ambient in a way only raw talent and ingenuity can.

The author attended this show as a guest of Fuzzy. Thank you Fuzzy for seeing the importance and value in what we do and not taking the supposedly easy route and just giving access to a bunch of fashion “influencers” whose IG stories fade in 24 hours .