The eminent Jameson House of Rounds returned for a night of whiskey, food and music at iconic bar The Rails in Byron Bay on Saturday, 4 December – and you can bet that we were there for every bit of it.

After a successful tour of Sydney’s favourite venues, including a three-day festival at Vic On The Park in Marrickville over the June long weekend, Jameson took the party north for an end-of-year celebration just in time for the easing of restrictions. A curated list of drinks for locals to enjoy included new flavours Jameson, Soda, Ginger & Lime RTD and Jameson & Cloudy Apple. They also shouted the first 100 lucky punters with a Jameson RTD and a Jameson x Thrills cap to kick off the mateship right from the get-go.

The day kicked off with DJ Joshua Pollard providing the goods with a mix of local indie-rock hits to set the mood as punters filed in at midday. When Babyshakes Dillon takes to the stage in pink overalls and three members of Full Flower Moon Band are donning shades, you know they’re some cool cats and you’re in for a treat. People flocked to the front as the grungy rock n roll five-piece opened with strutting grooves to get the party started. Dillon’s enchanting vocals and captivating stage presence was juxtaposed with her comical and engaging intermissions and they were very appreciative of the early turnout. 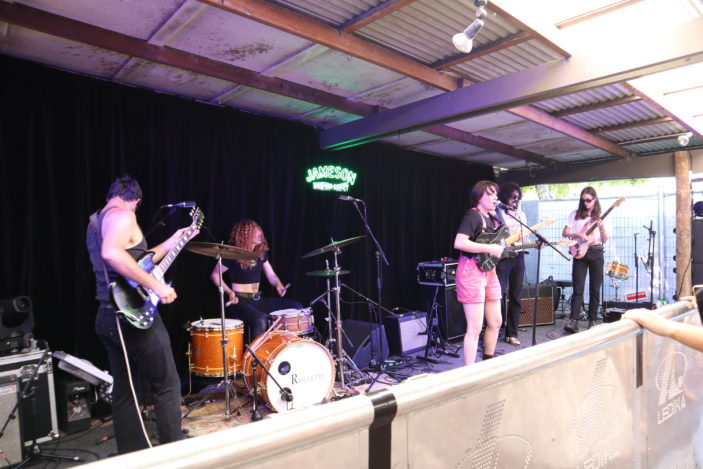 Next was jangle-pop five-piece Bed Club to lift a well and truly warmed-up crowd with pounding rhythms and catchy choruses. With uncut strings on their acoustic and two electric guitars showing their rough-around-the-edges style, the combination gives the songs a sense of confidence in vulnerability. The dynamic between the two vocalists with a harmony of soft highs and coarse lows reflects the conflict of the lyrics. Shortly after the set, the venue hit its capacity and eager townsfolk queued outside to get a spot at the free event.

Now in full swing, psych-punk outfit Flying Machine turned it up a notch with a hot serving of thudding drums and big riffs. The five-piece had the crowd jumping to their rowdy singalongs with a punk influence and an indie flair, even incorporating tambourine and harmonica. The guitarists kept things interesting with humorous interactions and solos from on top of the barrier, one of them sipping from a can of beer held to his mouth at one point. Despite beautiful weather in the day, the sheltered half of the bar was packed long before a storm came rolling in for the night. 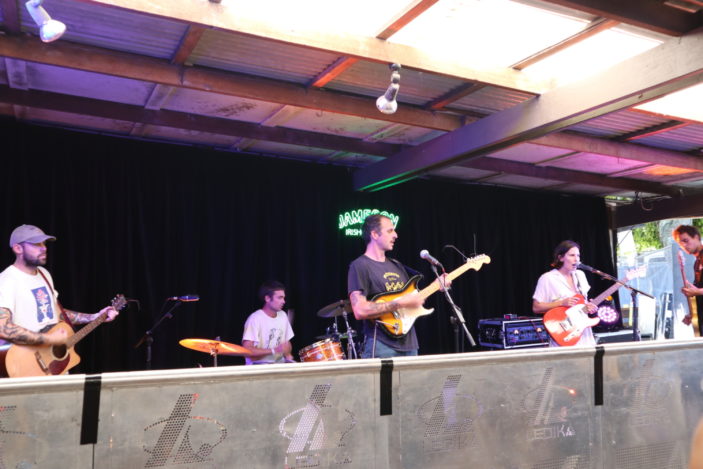 As hard rain pelted the tin roof and strong gusts forced security to dismantle umbrellas and tables, punters huddled undercover to see The Dharma Chain keep the show going. The six-piece mesmerised with their bluesy brand of psych-rock as bodies swayed to their groovy slow jams. Ethereal vocals and reverberant guitars blended to overpower the racket of wild weather, with the band stating at the end of their set: “We’re The Dharma Chain – rain, hail or shine.”

The anticipated Mini Skirt were everything punk should be – short, fast and rebellious with an Aussie spin. The unkempt four-piece (featuring the singer of Flying Machine on bass) were full of energy and everyone was giving it right back to them. Opening with distortion and feedback then launching into full-on thrash saw fans moshing as the frontman hung from a support beam and yelled frustrated but passionate verses at the crowd – and they loved every minute of it.

At long last, screaming fans rushed to the front to see headliners Middle Kids amaze with their big singalongs and upbeat numbers. Bright guitars, warm keys, pulsing bass and busy drums brought the spacious verses and climactic choruses to life with everyone holding each other and dancing away the night. The indie-rock trio played a varied set from their stellar catalogue and undoubtedly had a lot of fun, repeatedly saying how grateful they were for the love the town showed them. DJ Lucy Lucy spun a mix of old school classics to ride out the night and kept the good vibes coming well after the last live set.

Byron Bay’s first Jameson House of Rounds was a huge success and everyone was brought closer together by the end of the event, even those lining up outside in the rain just to attend a free show – the first in months for many. There is a certain charm to The Rails that attracts locals of all types and a strong sense of community was brought by the friendly and accommodating organisers and staff with smiles all round. Here’s to seeing the event return next year!