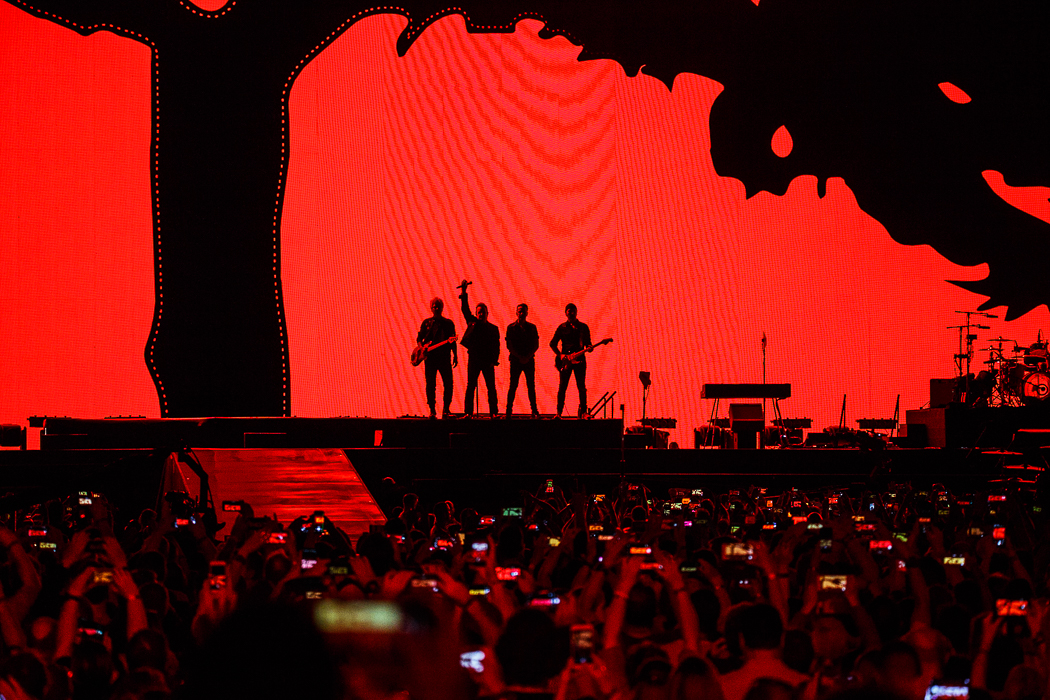 A U2 concert is not just another gig, it is an event that excites an entire city. There was an energy in the warm, summer air as thousands of Adelaide fans made their way across the footbridge over the River Torrens from the city to Adelaide Oval to see the Irish legends.

Noel Gallagher’s High Flying Birds were up first, as the sun was still shining and the punters were filing into the venue. With their beloved Manchester City’s paraphernalia adorning the stage, the band members were spread out, making the most of the huge space that was on offer. They kicked the set off with ‘Holy Mountain’ and followed up with ‘It’s A Beautiful World’, both off their 2017 album Who Built The Moon.

Gallagher has a personality that is big enough to fill the whole venue. He took the time to joke and chat with fans down the front. He also provided some insight into the meaning of the lyrics to his brand new single ‘Wandering Star,’ explaining: “it’s about a star that wanders. Wanders across the sky. F**king genius is what it is.”  Later, he asked the Adelaide crowd “What’s going on, Adelaide? Are there any Oasis fans? This one’s for you!” before, fooling us by launching into a High Flying Bird’s track called ‘Black Star Dancing’. He later explained that no matter where he performs, as soon as he plays the intro to ‘Wonderwall’ people who aren’t familiar with the High Flying Bird’s, suddenly realise who they are watching. “Oh, it’s that f**king guy!” he laughed; nonetheless, Gallagher thanked the crowd for indulging him, and then indulged us with a  few Oasis classics, including the crowd singalong favourite, ‘Don’t Look Back In Anger’ which, ironically, was followed by Gallagher calling one of his band members a “ginger c**t” before launching into a cover of The Beatles, ‘All You Need Is Love’ to round out the performance.

While you might have expected U2 to start this show with a bang, they didn’t want to do what was expected of them, and instead sauntered onto the stage one by one, casually making their way to the end of a long runway as ‘The Whole Of The Moon’ by British-Irish band The Waterboys played. Behind them was an epic, five-story high, curved LED screen, where up until now continuously scrolling poetry from the likes of Sherman Alexie, Walt Whitman and Pedro Pietri had been displayed. Underneath a huge Joshua Tree that now adorned the huge screen, the small stage set up at the end of the runway was shaped as the shadow of the tree on screen. They started their set in a more intimate setting, just the four of them close to each other and close to the fans, with no fancy visuals and went straight into ‘Sunday Bloody Sunday.’

They stayed together at the end of the runway for three more tracks, including ‘New Year’s Day’ and ‘Pride (In The Name Of Love)’, before everything turned red and the four members made their way to the back of the stage to pose for a moment, a perfect silhouette of one of the world’s most recognisable bands, standing beneath the big black Joshua Tree, Bono’s fist raised in the air.

The tour was a celebration of The Joshua Tree album and tour of the same name which was undertaken by U2 back in 1987. The main portion of the show had incredible visuals to match the albums themes of the American landscape, it’s people, literature and myths. U2 had engaged Dutch photographer and film-maker, Anton Corbijn who has collaborated with them before, to compose some short films and images to show behind the band, as they wound their way, track by track, through the entire album. While the visuals were stunning, it was at the sacrifice of showing the bands live performance on the screens for most of the show, which might have perturbed some fans in the nosebleed section.

A production of this magnitude (which includes the largest LED screen ever used for a touring production) seems like a very well-oiled machine with each band member knowing what is going to come next; however, despite this, the band still made a real connection with the audience, and with each other on stage. As The Joshua Tree album tracks came to an end, the band moved forward again, getting closer to the crowd and wrapped up their set with the bonus bluesy number, ‘Angel of Harlem’ which they wrote during the original 1987 tour for The Joshua Tree, but later released on Rattle and Hum album. The band leaves the stage, but there isn’t any doubt that they will return for an encore and to play a handful more of their hits.

After a short break they return to mad applause from the exultant crowd and U2 proceed to bring it home with a mix of hits from their long career. Bono had a costume change too, returning all glammed up with eyeliner, a top hat and glittery lapels on his jacket. A camera moves to the back of the stage to share the vantage point of Larry Mullen Jnr on the giant LED screen. The crowd cheers at the sight of the drummer’s t-shirt which is emblazoned with the word ‘ADELAIDE.’ He turns to the camera to give a thumbs up and a grin, before the band then tear through their hits, ‘Elevation’ and ‘Vertigo’, which have the whole venue singing along. Bono takes a moment to give a heartfelt re-introduction of his bandmates, Adam Clayton, Mullen Jnr, and guitarist, The Edge who then explodes into the intro of ‘The Real Thing’.

As the band ends the song ‘Beautiful Day’ Bono exclaims: “When sisters around the world get to go to school like their brothers, it’s a beautiful day. When women of the world unite to rewrite history, it’s a beautiful day…” and then dedicated the next number, ‘Ultra Violet’ to all the women in his world. The band played out the number in front of images of remarkable women from thought history and the world, and the word HERSTORY appears on screen.

Finally, as the whole event wraps up, U2 say their goodbyes to their overjoyed Adelaide fans. Bono asks for the stadium lights be dimmed and they signed off with their emotional hit ‘One.’ Adelaide Oval is suddenly aglow with the tiny twinkle of mobile phone torches in the air, as Adelaide said goodbye and thank you to the band, singing along with them to this anthem of connection and unity.