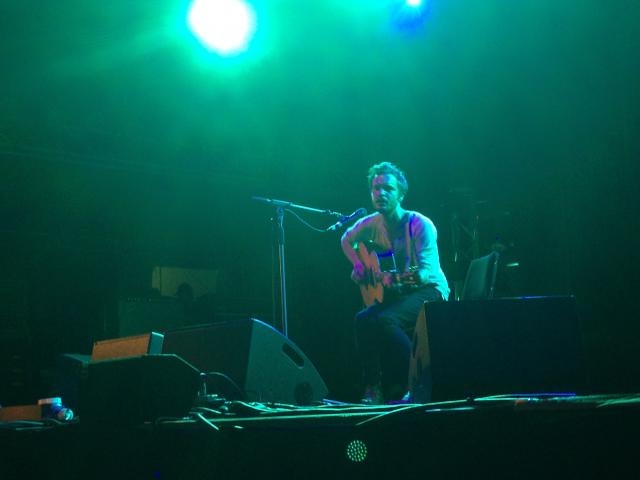 I’ve been waiting to see The Tallest Man on Earth live for a while now. I missed out on tickets to his sold out show at the Rosemount Hotel on his last Australian tour, so on the news that he would be heading back down to Australia, and playing the Perth Festival I jumped at the chance to see him live. I’d heard and read much about his charismatic stage presence and was keen to finally see it in person.

First up for the evening were the Brooklyn duo Buke & Gase, touring Australia for the first time, fresh from the release of their second LP General Dome. They started off well, with Arone Dyer’s ethereal vocals cutting through the visceral driving rhythms of the modified baritone ukulele and guitar. Now for the most part I enjoyed their set, but after about thirty minutes, I found myself wanting them to mix things up a bit. It all started to sound too similar, each song somewhat indistinguishable from the last. They’re clearly a talented pair, but there just wasn’t enough variety there to hold my attention near the end.

After a short break, Kristian Mattson (a.k.a The Tallest Man on Earth) came bounding out to the strains of Håkan Hellström’s “För sent för Edelweiss” (thank you internet), before launching straight into a fantastic rendition of “King of Spain” from 2010’s The Wild Hunt quickly following it up with “Love Is All” from the same album.

Mattson is an engaging and captivating performer, launching himself around the stage, he demands you attention. His performance was nothing short of masterful. There is a slight mischievous and “mystical” energy to his performance, the way he moves across the stage, and the way he stops, pauses, staring into the audience, searching for their reaction. At times he reminded me of Puck from Midsummer Nights Dream. Jet lag may have got the better of him on a few occasions, with Mattson at times choosing to perch on a chair.

Running to just over an hour, it wasn’t an overly long show by any stretch, but every Mattson made every minute count, nothing was hurried or drawn out, indeed the show received a natural finish, the encore closing with “The Wild Hunt” seguing neatly into a simple yet gorgeous cover of Paul Simon’s “Graceland”. It was a masterful performance, one that really highlighted Mattson’s talent as a performer and a songwriter. A definite contender for favourite show of the year so far.