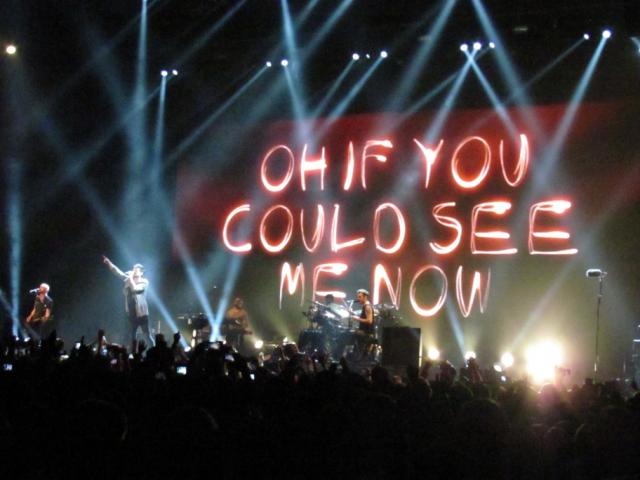 Mainstream radio has served the Irish lads from The Script very well in recent years and in turn they have often visited Australian shores to perform; this time with another step up in the capacity stakes playing at the Sydney Entertainment Centre.

Our opening act had a remarkably Irish name, but in Sinead Burgess we had a very Australian female singer songwriter who opened her set with a song titled “Goodnight America”. This, along with another of her originals and her cover of The Killers track “When We Were Young”, made up the slower more amble-along material of her acoustic set. Lyrically they were all a bit too “heartbreak cliché”, and sounded like Lady Antebellum with a little less country. Though her more upbeat tracks “Big City Lights” and set closer ‘Rear View Mirror’ were more likeable, energetic and better warm-ups for our big act.

I was not familiar with our second supports, The Original Rude Boys, prior to this night – and won’t lie that I was disappointed they were nowhere near as “rude” as their moniker claims them to be. They, like The Script, attempt to blend a little Anglicised rapping in to their pop/rock songs. Unfortunately however it comes across as subpar rhyming that feels inserted rather than thought out and well paced. Onstage their ukulele player Sean Walsh appeared to be completely redundant as I think I only heard it in the instrument mix once despite the fact that his role is lauded. They did manage to engage a little with the crowd during their track ‘Written Songs (Feeling Good)’ but that may have been due to the fact it incorporated some Wiz Khalifa lyrics. It was a nice touch though that they managed to coerce the majority of the crowd to raise their lit up mobile phones in the centre during the last song ‘Stars In My Eyes’.

Our headliners The Script knew how to shift things up a gear, running out onstage to ‘Good Ol Days’ and getting the audience’s arms waving in the air from side to side within seconds. They churned out their back catalogue with ease. The big radio hits included ‘Breakeven’ and ‘The Man Who Can’t Be Moved’, with the latter garnering a large (semi off-key) audience sing-a-long, which by the end of it had frontman Danny O’Donoghue emotionally moved and repeatedly thanking the crowd. He’s a genuine Irish charmer, and it’s evident that the band were all enjoying themselves and the audience response to their material.

New track ‘If You Could See Me Now’ got the best visuals of the night featuring heavy chunks of the lyrics up on the projection screen done in flame like streaks. Glen Power’s drum intro to ‘Talk You Down’ was phenomenal to watch – he pounded the skins with such speed that he certainly lived up to his surname. During a moment’s break between singing Danny queried the audience as to who has ever been guilty of drunk dialling an ex, and then proceeded to grab a mobile phone off somebody in the front row and then the band break into ‘Nothing’, all whilst O’Donoghue was serenading the receiver of the call. I’d be interested to know whether that person stayed on the line for the entire near 5 minutes of the song.

The acoustic interlude with ‘I’m Yours’ was a nice mellow moment, and a chance for all the ladies to swoon if they hadn’t already. This lead us straight into another new song, ‘6 Degrees Of Separation’, where guitarist Mark Sheehan got a chance to throw some shredding in. Main set closer ‘You Won’t Feel A Thing’ was a frenetic affair from all onstage, as well as the audience. We all got a shock to find Danny in amongst the first elevation and making his way down the aisle hugging and high-fiving fans as he goes. They closed off the night with ‘Hall Of Fame’ and a shower of white paper confetti rained down on all of us. It’s a big song with a big showy way to finish off, and it’s appropriate.

There’s not much to dislike about this performance. They played all their radio friendly tracks and the band were almost constantly moving onstage; particularly the singer and occasional guitarist/keyboarder Danny O’Donoghue who appears to have boundless amounts of energy. The only complaint I would have is that it would’ve been nice to hear a few more of the new songs done live. For example, I would’ve liked to hear ‘Hurricanes’ in lieu of old track ‘Science And Faith’. Considering that this was the major tour in support of their latest record #3 I was surprised at how few new songs featured in the set. It’s an enjoyable show though, at nearly 2 hours long I don’t think any of the fans who went along left disappointed.